On Tuesday, it was reported that the Yankees shut down minor league pitchers Ronald Herrera and James Reeves due to injuries.

Herrera, 21, was acquired from the San Diego Padres on November 11, 2015 for Jose Pirela. The Venezuelan native pitched for the Trenton Thunder (Double A) and Scranton/Wilkes-Barre RailRiders (Triple A) in 2016. He posted a combined 10-8 record and 3.94 earned run average (ERA) across 137 innings.

The right hander is experiencing shoulder inflammation and will be shut down for two weeks. It is then expected that Herrera will return to Major League camp, before he begins the regular season back in the RailRiders rotation.

The Yankees added Herrera to the 40 Man Roster in November in order to protect him from potentially being selected in the Rule V Draft during the Winter Meetings in Washington D.C. 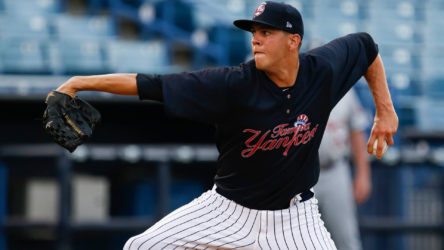 Reeves, 23, after experiencing discomfort, had an MRI that revealed a mild strain in an elbow ligament. He will be shut down for 3-4 weeks and is expected to then report to minor league camp to finish Spring Training.

James earned his first invite to Major League Spring Training this season after being drafted in the 10th round of the 2015 First-Year Player Draft out of The Citadel. The southpaw has posted terrific numbers thus far in his young career. In 2016, Reeves pitched to a 6-2 record with a 2.22 ERA across three levels of the minor leagues.

If all goes well in his rehabilitation, expect Reeves to begin 2017 with the Trenton Thunder.