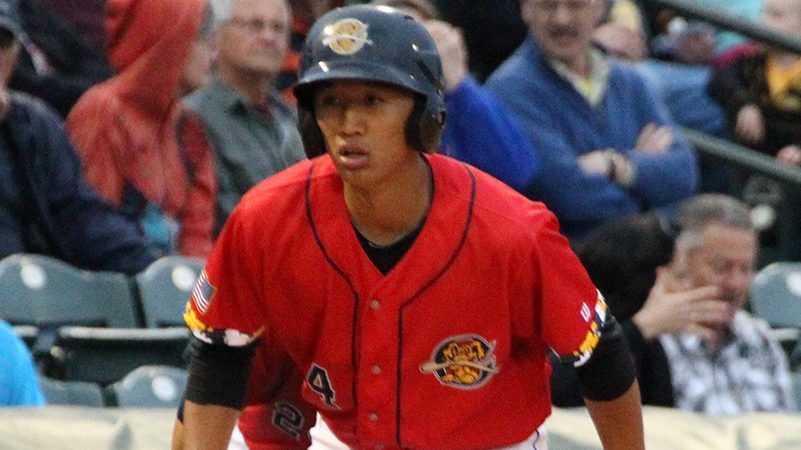 CHARLESTON, SC – The Charleston RiverDogs put on a hitting extravaganza, piling 10 runs on West Virginia to take game one of the three game series, 10-2, in front of 5,072 at Joseph P. Riley, Jr. Park Monday night.

In his return to Charleston, Gosuke Katoh had a warm welcome to The Joe as the Charleston RiverDog second baseman went 3-for-5 with a home run and two runs scored in his 2016 debut with the club.

The RiverDogs (28-15) offense scored 10 runs off of 16 hits, both tying season highs, which featured every batter in the lineup recording a hit. Six collected multi-hit games, including Kyle Holder who extended his hitting streak to 12 games with a 2-for-4 performance with an RBI.

Charleston starter Christian Morris (3-0) gave up an early home run to Tito Polo in the first inning, but didn’t let that faze him.  The righty took command of the game from there on out, throwing a solid 6.0 innings, giving up just the one run on four hits, a walk, and six strikeouts, lowering his ERA to 1.48 on the season.

The RiverDogs jumped all over West Virginia starter J.T. Brubaker (2-5) as the Power pitcher only lasted 2.0 innings, giving up six runs (three earned) with a pair of walks and strikeouts alike.

In the bottom half of the first inning, the RiverDogs put a three-spot on West Virginia after they trailed 1-0.  After a one out strikeout, Aguilar reached on a throwing error by the Power pitcher, J.T. Brubaker.  Chris Gittens then took advantage of having a runner on base by driving Aguilar home from first with an RBI double to right center tying the game at one.  With two away, right fielder Jhalan Jackson ripped another RBI double to the right center gap, and Audie Afenir drove in Jackson with a flare into left, taking a 3-1 lead.

Charleston didn’t take their foot off the gas as they piled on three more runs in the top of the second. In his first at-bat back with the RiverDogs, Katoh cranked a solo home run off the video board in right field on the second pitch he saw.  With two outs, Gittens was able to draw a walk, and Spencer tanked his fourth home run of the season, also off the video board, blasting Charleston to an early 6-1 lead on West Virginia.

Aguilar tacked on another run for the RiverDogs in the bottom of the fifth.  Aguilar hit an RBI double to right center, making it 7-1 Charleston.

West Virginia put a position player on the mound in Logan Ratledge in the seventh, as Charleston chased him for three runs for a 10-1 advantage. West Virginia got a run back in the ninth on an RBI double by Christian Kelley, tagging Jose Mesa for his lone run against in relief. The righty worked the final three frames to pick up his first save of the season.

The RiverDogs remain in first place in the Southern Division standings in the race for the first half title, holding a 5.5 game lead over the Asheville Tourists.

The Charleston RiverDogs celebrated Youth Baseball Night at The Joe, recognizing all of the local little leaguers, as they were paraded around the field before the game. It was another Dog Day Monday, which featured $1 hot dogs and a great night for four legged furry friends to be at the ballpark.

The RiverDogs will be back Tuesday night for the second game against the West Virginia Power in a three game series as RHP Luis Cedeno (0-1, 7.71) will toe the rubber for Charleston, facing RHP Bret Helton (1-3, 5.29) of the Power.  Are you a macho man or like to flex for the fun of it? Tuesday is your night to show off your manliness with manly feats of strength and bubble suit battles just some of the testosterone fueled competition fans can expect. You don’t have to be a man to take advantage of another great night to get out “With the Crowd” on the a Miller Lite “Take Me Out Tuesday” presented by Harris Teeter and NASH FM. Special ticket packages include a 2-for-$20 deal that includes two tickets and two meals for just $20 (box office purchase only).