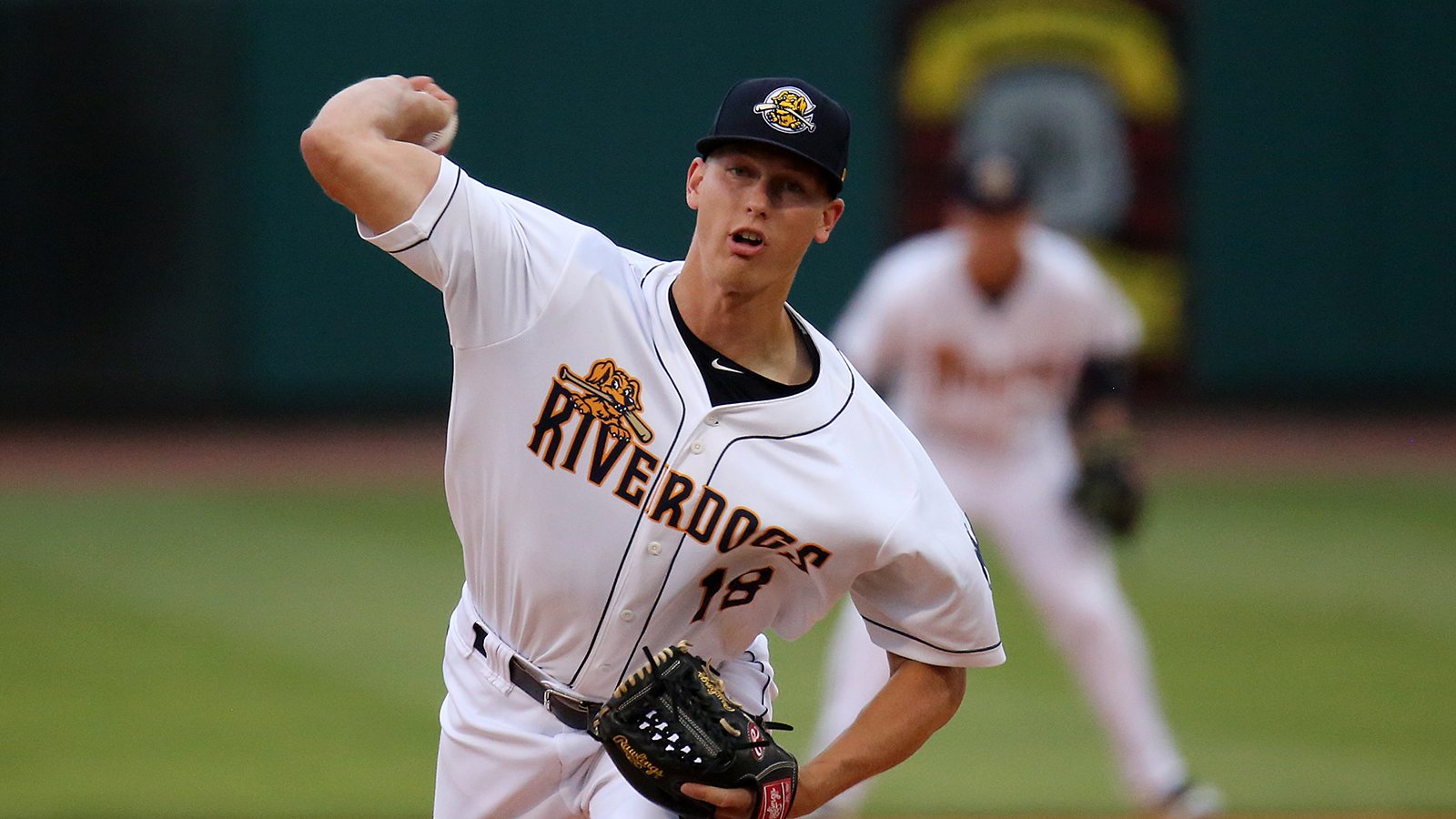 The Charleston RiverDogs pitching staff combined to shutout the Augusta GreenJackets in a pitcher’s duel Friday night at Joe Riley Park by the score of 2-0. The Dogs and Jackets combined for just eight hits total and the only runs of the game came in on bases loaded walks.

Brian Keller (W, 6-5) pitched in and out of trouble starting right away in the first. The Jackets loaded the bases with no one out when Ashford Fulmer walked, Jean Angomas hit a single through the left side of the infield and Kelvin Beltre placed a ball through the right side of the infield. Keller got Jose Vizcaino Jr. to hit a soft liner to second baseman Diego Castillo for the first out. He then struck out Jacob Heyward and Sandro Fabian to get out of the inning unscathed. That was Augusta’s best offensive threat of the night.

Charleston would score the only runs of the game in the bottom half of the first off Jackets starter Melvin Adon (L, 1-8). Hoy Park led the inning off with a single to right field. Diego Castillo would ground into a fielder’s choice groundout to second base that erased Park. Blake Rutherford went the other way with a single to left field to place runners on first and second. Estevan Florial hit a line drive that hit Adon. Adon picked up the ball and would have gotten Florial out at first, but his throw floated and took first baseman Vizcaino off the bag for an error. With the bases loaded, Donny Sands drew a walk to bring in Castillo for the first run. After Isiah Gilliam struck out looking, Brandon Wagner drew another walk to bring home Rutherford to make it 2-0 Dogs. Adon would be the tough luck loser as both runs he gave up ended up being unearned.

“We’re playing really good baseball. Tonight we had a couple of breaks, the tough first inning for Adon. He walked a couple of guys in, but when you’re playing well, sometimes you find ways to get breaks and we’re getting them right now. We’re pitching well, we’re playing good defense and we’re finding some holes,” RiverDogs manager Patrick Osborn said.

Keller would flirt with danger in the second inning as well. Frandy De La Rosa and Adam Sonabend led the inning off with singles to put runners and first and second. Brandon Van Horn laid down a sac bunt to move the runners to second and third. Keller then struck out Fulmer and induced Angomas to ground out to Park at short to end the threat.

Keller ended up going five and one-third innings allowing four hits, walking three batters and striking out seven to earn the victory. “He’s strong and has put together a bunch of good starts now. It’s a solid performance out of him, commanding the ball with four pitches for strikes. It may be time for him to get on out of here,” Osborn said.

The bullpen took over from there as David Sosebee (H, 3), Trevor Lane (H, 7) and Garrett Mundell (S, 8) held the Jackets scoreless over the final three and two-thirds innings. The bullpen did not allow a hit and struck out five batters. “They continue to do the job. Whoever we put out there, it’s pretty much shutdown from day one of this season. They’ve been very, very, very good,” Osborn said of his relievers.

The RiverDogs improve to 6-2 on the second half of the season (35-36 overall) while the GreenJackets drop to 4-5 on the second half (23-43 overall). The two teams continue their four game series with game two Saturday night at Joe Riley Park.