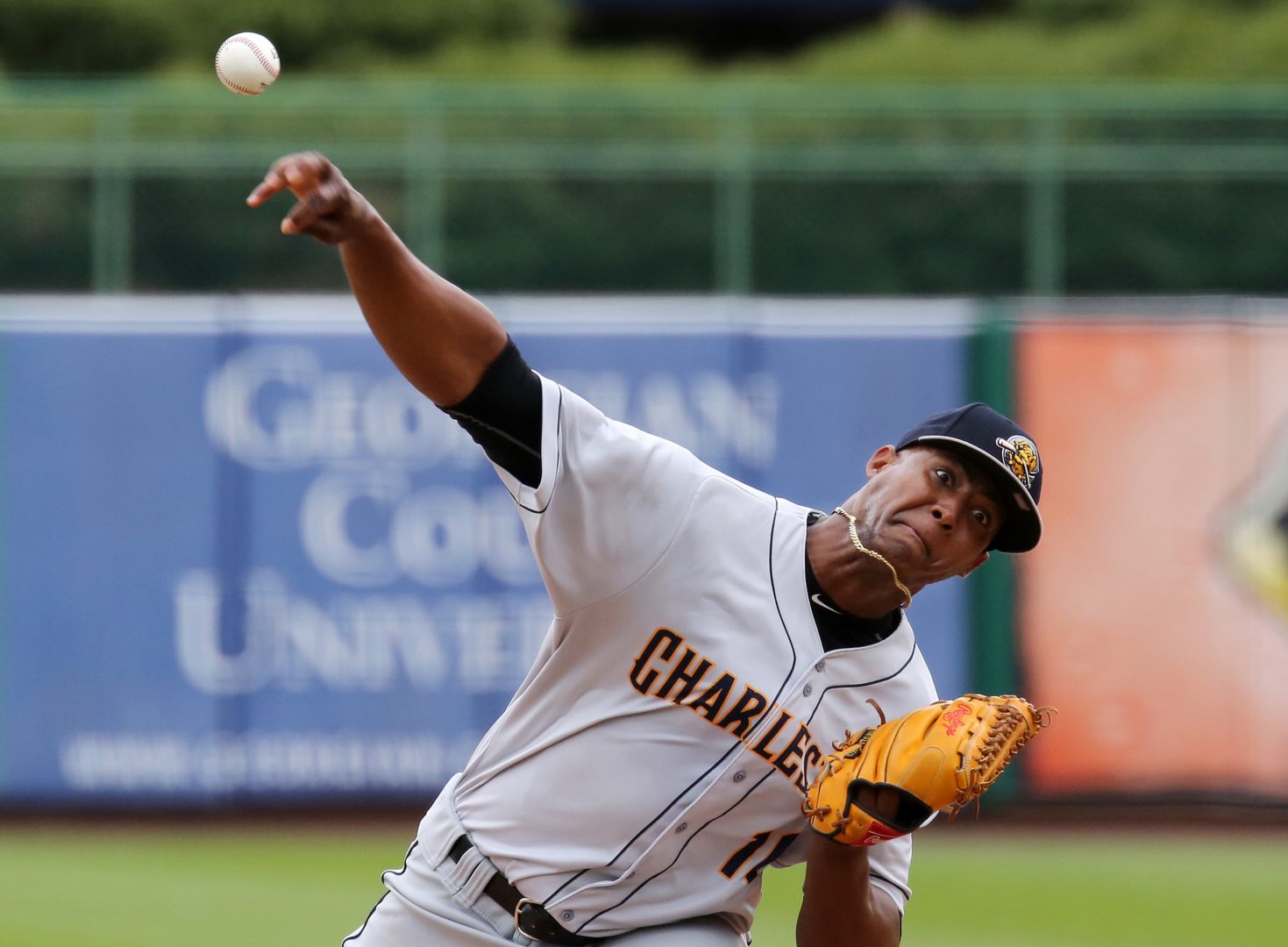 CHARLESTON, SC – A three run fifth inning would be all the Charleston RiverDogs needed as they topped Asheville, 3-0, on  Friday night in front of a crowd of 4,823 at Joseph P. Riley Jr., Park. The RiverDogs’ magic number for the first half title now stands at six with the subsequent loss by Augusta with Charleston inching closer to their first playoff berth in 11 seasons.

The RiverDogs (36-23) put a three spot on the Tourists (30-30) in the bottom of the fifth inning to break up a scoreless tie.  Leonardo Molina led off the inning with a strikeout, but was able to reach first on the play as the ball skipped away from catcher Hamlet Marte.  Hoy Jun Park then stepped up and roped a double into center field to put runners in scoring position. Alexander Palma proceeded to scorch a ground ball into right field scoring Molina to open the scoring, and that did it in for Asheville’s starter Peter Lambert (2-4).

Drasen Johnson came on for Lambert but didn’t serve to be of any relief as the first batter he faced was catcher Eduardo Navas who he plunked to load the bases. The RiverDogs center fielder Cesar Diaz then grounded into a fielder’s choice to score Park on the play, nabbing a sliding Navas at second to make it 2-0.  With runners on the corners Kyle Holder singled through the right side to score Palma, putting Charleston up 3-0.

Asheville presented a threat in the top of the fifth inning as Chris Keck began the inning with a leadoff single to right. On the play Keck rounded first hard and right fielder Palma threw behind the runner.  The ball got away and allowed Keck to move to second.  On the ensuing pitch RiverDogs starter Domingo Acevedo (3-1) attempted to pick Keck off of second, but instead hit Keck in the back allowing the ball to trickle into left field putting the runner at third with no outs.  After Acevedo fought back with a pop out, Navas blocked a fastball in the dirt and would tag out Keck caught in between third and home on a squeeze play.  After a walk, Acevedo got out of the inning unscathed.

Acevedo got the win behind 5.2 innings of four-hit baseball, issuing two walks and striking out five.  Hobie Harris took over the next 2.1 innings relenting just three hits and three strikeouts as Andrew Schwaab picked up his 11th save of the season.

The RiverDogs blasted into another wonderful Charleston weekend with Home Telecom Friday Night Fireworks lighting up the Ashley River after another RiverDogs win. Charlestonians got groovy on a 70s night at the ballpark with the tunes of the decade providing the soundtrack to the fireworks spectacular.

The RiverDogs will take on the Tourists in the thrid game of the series Saturday June 11th as RHP Luis Cedeno (2-2, 3.32) squares off against RHP Jesus Tinocco (NR, -.–).

Arrive early to get your player autographs on the concourse and stay late for another “Saturday Live at The Joe” presented by Star 99.7. Pregame, the RiverDogs will honor the Cannon Street All-Stars and tip their caps in reverence in a special salute the Negro Leagues presented by SC State University. During the game, current Charleston Southern outfielder Chris Singleton whose mother was a victim of the Mother Emmanuel AME shooting will be presented with the Humanitarian Award.  The RiverDogs continue the Saturday post game promotion with a tribute to Larry Doby, the first African-American player in the American League, while advancing the conversation to enhance community togetherness.  Fans are asked to stay as the RiverDogs present a Night of 1,000 Candles, showcasing the power of one light.