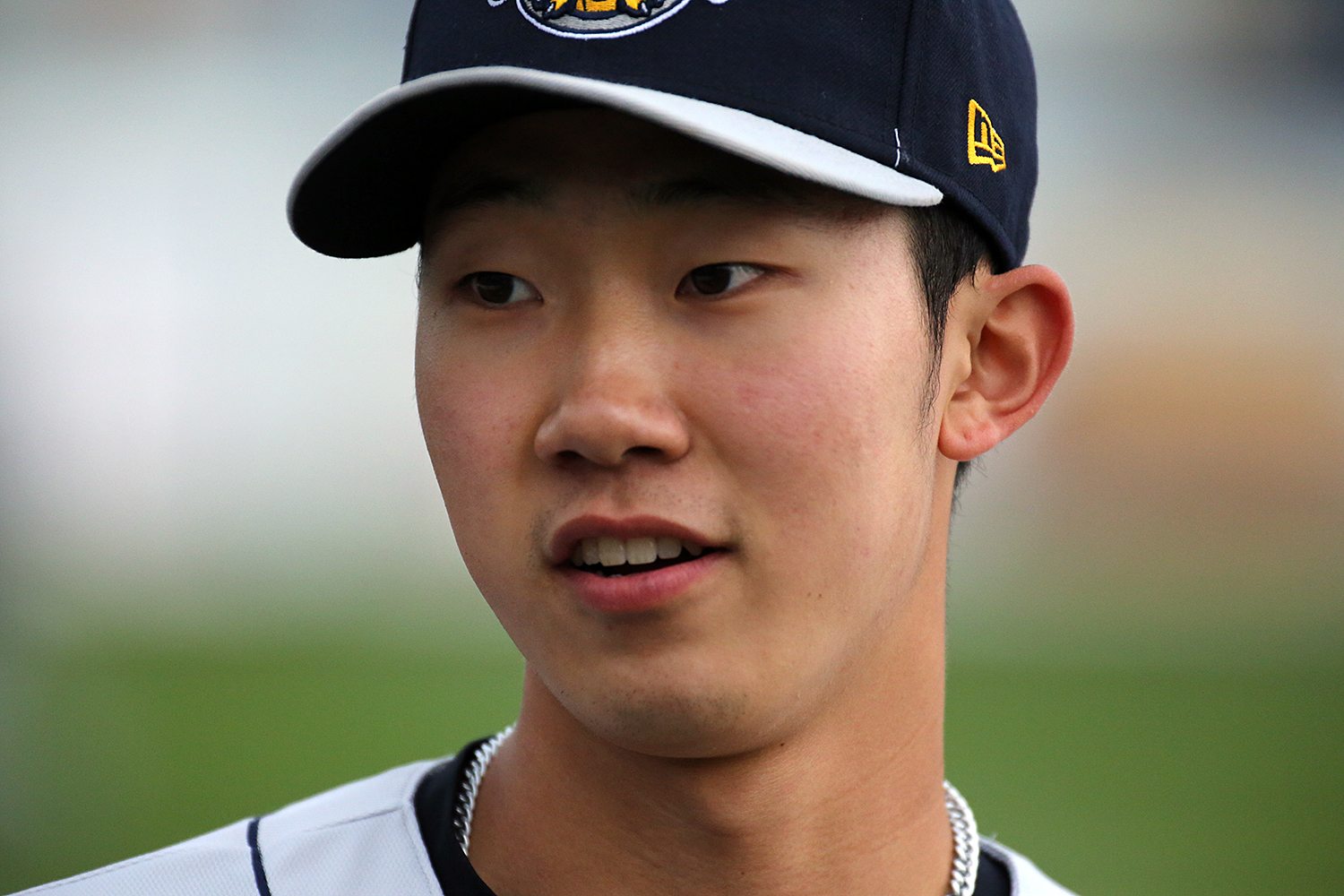 Charleston RiverDogs shortstop Hoy Jun Park before a game against the Lakewood BlueClaws at FirstEnergy Park in Lakewood on Tuesday, April 26, 2016. Photo by Martin Griff

CHARLESTON, W.V. – Second baseman Hoy Jun Park tripled and later came around to score to tie the ballgame at two apiece in the top of the seventh inning, but West Virginia would come back to steal the finale of the three-game tilt, 3-2, over the RiverDogs on Wednesday at Appalachian Power Park.

Park’s triple, his first of the season, was part of a 3-for-4 day at the plate for the 21-year-old Korean who carried the RiverDogs (11-10) offense in the early morning start. Charleston collected just five total hits in the ballgame, and were unable to complete their first series sweep of the season as they fell to 0-4 in day baseball action to start the year.

West Virginia (9-12) took a 2-0 lead after three innings, first getting to RiverDogs starter Jio Orozco in the opening frame. The Power collected three straight hits but a relay throw from right field cut down the first potential run at the plate before first baseman Carlos Munoz made it 1-0 on a double to the right field corner. West Virginia added another in the third when left fielder Ty Moore reached on a strikeout and a wild pitch, later scoring after a second wild pitch and a passed ball by catcher Donny Sands.

Charleston got back into the ballgame in the fourth when Park sparked a rally with a two out single. Sands drove him in on a double to left-center to make it a one run game once more.

After Park tripled to lead off the seventh, center fielder Estevan Florial brought him home on a sac fly to left to pull Charleston even.

The Power retook the lead in the eighth, tagging Christian Morris (0-1, 3.86) for a run in his 2017 return with the RiverDogs. Shortstop Kevin Mahala reached on an infield single to short before third baseman Hunter Owen drove him home two batters later with two outs with a double hit down the left field line for the eventual game-winner.

Park collected his third hit with a two out single to keep the RiverDogs’ hopes alive in the ninth, but Geoff Hartlieb would slam the door for his first save of the season.

Orozco went a career-high 5 2/3 innings for Charleston, allowing two runs, one earned, with seven strikeouts and four walks while allowing five hits in his fourth start of the year.

The RiverDogs continue their weeklong stint away from The Joe, next starting a four-game series against the Delmarva Shorebirds, the Class A affiliate of the Baltimore Orioles, on Thursday night. Charleston will send RHP Brian Keller (2-1, 3.78) to face Shorebirds LHP Zach Muckenhirn (1-1, 2.14) starting at 7:05pm from Arthur W. Perdue Stadium. The game will be broadcast on WTMA 1250 AM in the tri-county area and online streaming at riverdogs.com and the TuneIn Radio app under the “Charleston RiverDogs” station. The RiverDogs return home for a weeklong homestand starting on Tuesday, May 2 at The Joe.