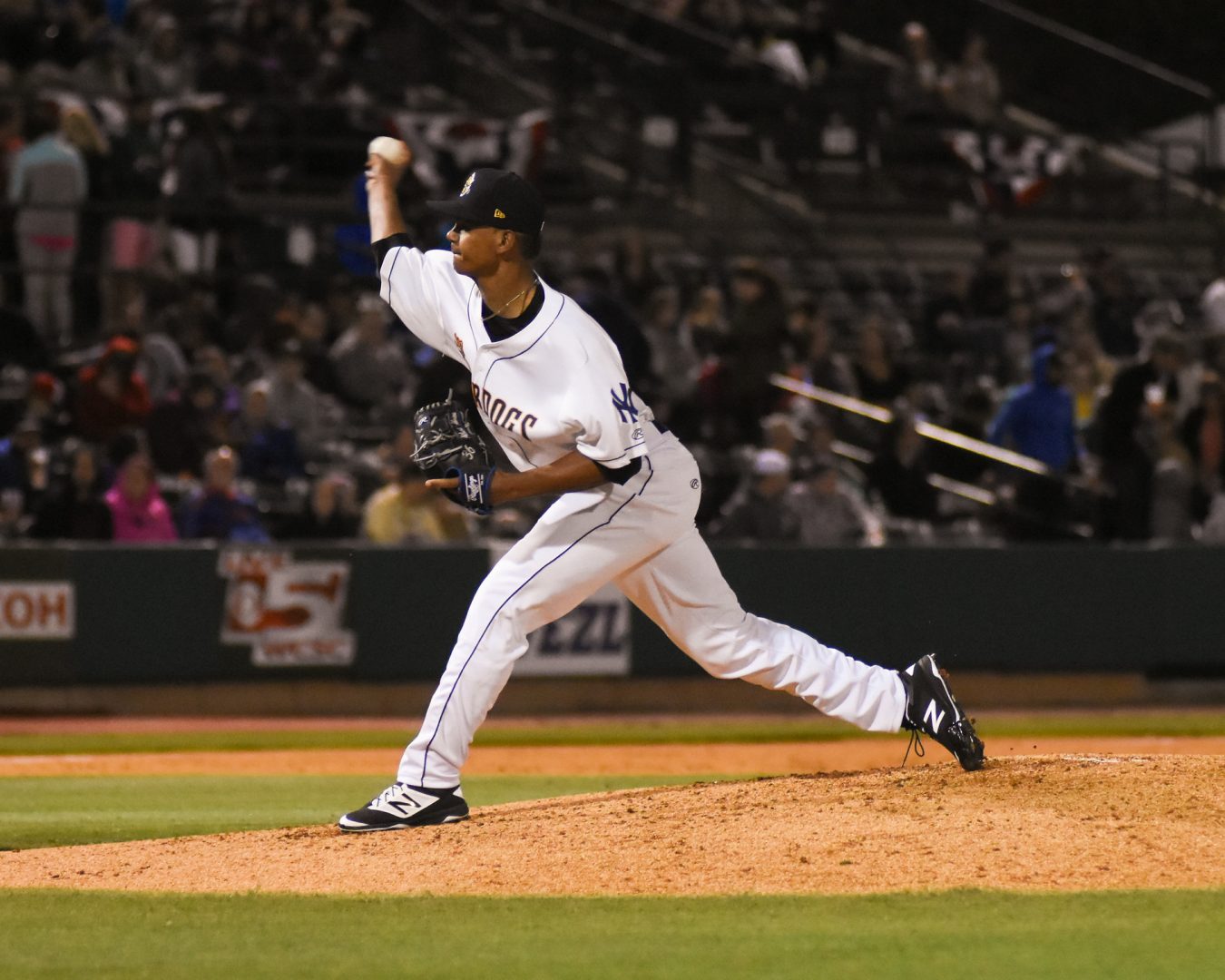 Kelvin Beltre drives in two to rally GreenJackets past Charleston

AUGUSTA, GA– For the first time this season, the RiverDogs let a lead slip as the Augusta GreenJackets rallied to score three unanswered runs to take game two, 3-2, and even up the series with Charleston on Tuesday night at Lake Olmstead Stadium.

GreenJackets (4-9) designated hitter Kelvin Beltre was a thorn in the side of the RiverDogs (8-5) all night long. The No. 20 prospect in the Giants farm system went 2-for-2, reached base three times including a triple, and drove in both the tying and go-ahead runs in the ballgame.

The RiverDogs took a 2-0 lead to start, first adding a single tally in the opening frame. Diego Castillo reached on an error by third baseman Manuel Geraldo, moved up on a double by center fielder Estevan Florial, and scored as Angel Aguilar grounded out to short to collect his 10th RBI of the season to match the team high.

In the fourth, first baseman Brandon Wagner drew a one out walk and right fielder Isiah Gilliam brought him home on the next play with a double ripped to right to put Charleston out to a 2-0 lead.

RiverDogs starter Albert Abreu rolled through his first three innings before running into trouble in the fourth and fifth. Save for a triple that nearly left the park off the bat of Beltre in the first, he faced the minimum through three before hitting a batter and walking the next to put two on with nobody out. Abreu would weasel out of the jam, but couldn’t duplicate the feat in the following frame after second baseman Frandy De la Rosa singled and catcher Zach Bowers was hit by a pitch to put two on with nobody out for the second consecutive inning. A double play on the next play nearly got the right-hander out Scott free, but former Coastal Carolina outfielder Anthony Marks followed with base hit to right and a wild pitch on strikeout forced in the first run for Augusta. Beltre pulled the GreenJackets even with an RBI single to left field.

In the seventh, Beltre again did the damage, bringing home a leadoff walk, Brandon Van Horn, on a sacrifice fly to right field that gave Augusta a 3-2 lead they would not relinquish.

David Sosebee (0-1) pitched well, but took the loss. The former Georgia Bulldog turned in three innings, allowing one run, with three strikeouts and a walk.

GreenJackets lefty Cameron Avila-Leeper (1-1) turned in three shutout innings out of the pen to earn the win.

Charleston had won all eight previous games they held a lead in and were 3-0 after scoring first.

The RiverDogs finish out the series with Augusta in a Wednesday morning contest on Education Day at Lake Olmstead Stadium. Charleston will send RHP Freicer Perez (0-0, 8.44) to the toe the rubber against Augusta RHP D.J. Myers (0-2, 6.48). First pitch is set for 10:35am. The game will be broadcast exclusively online at riverdogs.com and the TuneIn Radio app under the “Charleston RiverDogs” station. The RiverDogs return home for a four-game series against Asheville from April 20-23 at The Joe.