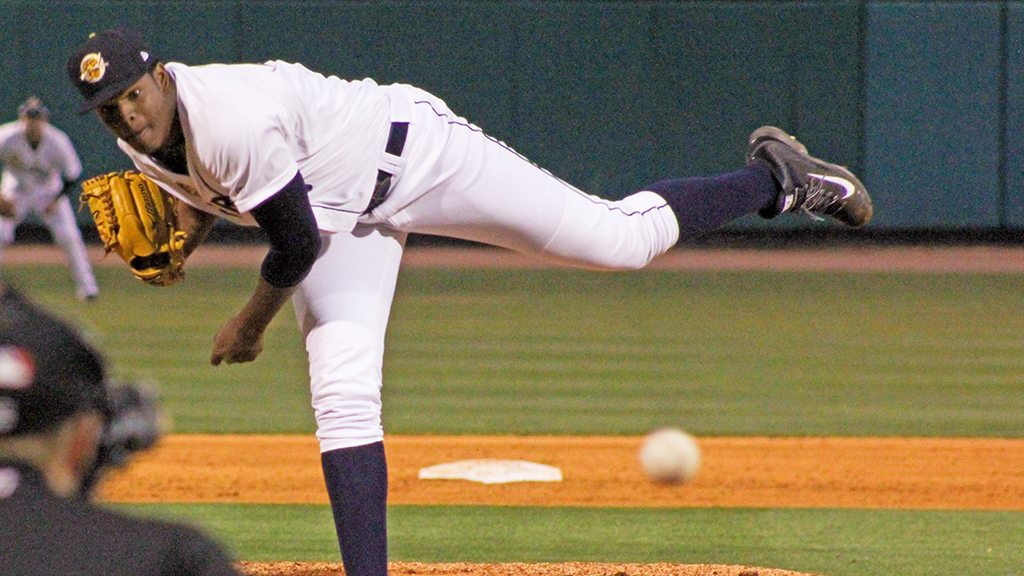 GREENVILLE, S.C. — Trailing 2-1 with three outs to go in Sunday night’s series finale, the Charleston RiverDogs mounted a late comeback and beat the Greenville Drive 3-2 at Fluor Field at the West End. The RiverDogs split the series with the Drive two games apiece and they finish the seven-game road trip with a 4-3 record.

Alexander Palma and Brandon Thomas started the top of the ninth with consecutive walks. Then, Gosuke Katoh laid down a sacrifice bunt, but the pitcher Jamie Callahan (0-4) threw the ball away trying to get Katoh out at first. Palma scored, Thomas moved up to third, and Katoh advanced to second.

After a Ryan Lindemuth walk chased Callahan from the game, Connor Spencer hit a sacrifice fly against the new pitcher Ryan Harris to score Thomas. With the sac fly, Charleston (23-20) had their first lead of the night 3-2.

Rony Bautista (2-0) set down the Drive (25-18) in order in the bottom of the ninth. The RiverDogs’ right fielder Palma provided a web gem with a sliding catch in foul territory for the second out of the inning.

Greenville scored both of their runs in the bottom of the fourth. Derek Miller led off the frame with a walk, advanced to second on a Justin Kamplain wild pitch, and scored on a ground ball to center field by Rafael Devers. The grounder rolled under Devyn Bolasky’s glove and went all the way to the warning track in dead center. Devers flew around the bases and scored Greenville’s second run.

Aggressive baserunning plated the first run for the RiverDogs in the sixth inning. With runners on first and third with nobody out, Dustin Fowler took off from first. Greenville catcher Jordan Procyshen threw Fowler out at second base, but Angel Aguilar came home to score on Procyshen’s throw.

With the win, the RiverDogs are now two games behind the Drive in the SAL Southern Division. This is the final time the two teams meet in the first half of the season.

COMING UP: The RiverDogs return home to The Joe for a three-game series against the Rome beginning Monday at 6:35 p.m. Charleston will send RHP David Palladino (3-2, 2.76 ERA) to the mound against RHP Max Povse (2-1, 4.15 ERA) for the Braves. You can watch the game on MiLB.tv or listen to the action on “The Big Talker” 1250 WTMA, WTMA.com, and RiverDogs.com.

The series begins on Memorial Day so naturally, red, white and blue will be this game’s theme. The RiverDogs honor those who have served and are serving our country by featuring classic Memorial Day barbecue games like cornhole, water balloon toss and an All-American apple pie eating contest. The RiverDogs’ players and staff all appreciate the hard work and dedication of the men and women who serve in the U.S. Armed Forces. Before the National Anthem is performed, we will have a moment of silence for those who have served and are serving overseas. Every Monday at The Joe is also Coors Monday Night Baseball. Visit the Ashley View Pub for $1 hot dogs and $1 draft beers. After the game, there will be a postgame fireworks display over the scenic Ashley River.