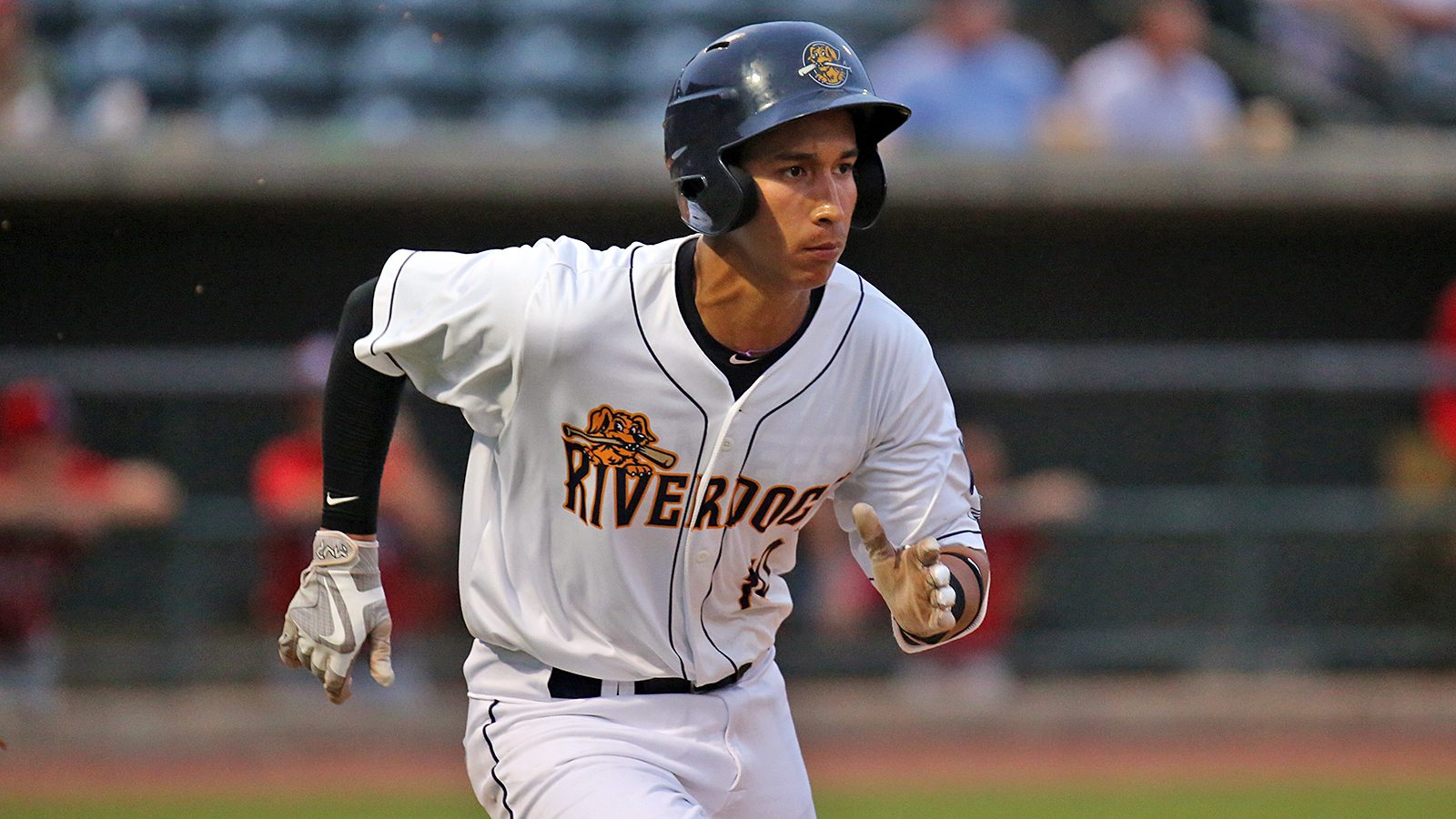 The Charleston RiverDogs rallied back from a 4-1 deficit to defeat the Delmarva Shorebirds 7-5 Sunday night at Joe Riley Park behind a career-high four RBI night from the second baseman Oswaldo Cabrera.

The Shorebirds jumped on top quickly in the first inning. Ryan McKenna beat the throw from shortstop Hoy Park to open the game with a single off RiverDogs starter, Adonis Rosa. Jake Ring followed with a home run down the left field line that barely cleared the wall and dinged the bottom of the foul pole to make it 2-0 Birds.

Estevan Florial answered right back leading off the bottom of the first with a home run that hit the scoreboard in left field to make it 2-1 Birds.

Delmarva would tack on runs in the third and fourth to make it 4-1. In the third, Daniel Fajardo singled to left to bring in Gerrion Grim to make the score 3-1. In the fourth, Ring would homer again to make it 4-1 with a home run to center field.

The RiverDogs would put together a rally in the fifth starting with leadoff hitter Carlos Vidal‘s bunt single placed between Delmarva starter Travis Seabrooke and first baseman Preston Palmeiro. Leonardo Molina then drew a walk. Eduardo Navas flew out to the right fielder bringing up Florial. Florial singled to right to plate Vidal for his second RBI and make it 4-2 Delmarva. Cabrera stepped to the plate and hit a towering home run over the left field wall for a three-run home run and a 5-4 RiverDogs lead.

The Shorebirds answered back in the eight when Ring (4-for-5, 3 RBI, 3 R) doubled off Dogs reliever Kolton Mahoney over centerfielder Florial’s head with one out. Chris Clare singled Ring in to tie the game at five with a dribbler that found the hole between second baseman Cabrera and first baseman Wagner.

In the bottom half of the eighth, Brandon Wagner started off the inning singling to right field off Birds reliever Jhon Peluffo. Vidal followed him with another single to left. Molina then puts down a bunt to try and advance the runners to second and third. Peluffo fielded the ball and fired to third base, but Collin Woody was unable to make the catch and Wagner came around to score to make it 6-5 RiverDogs. Eduardo Navas then put down a bunt trying to sacrifice the runners which resulted in a bunt single to load up the bases once again. After Florial struck out, Cabrera drove in his fourth RBI with a sacrifice fly to left field to score Vidal and make it 7-5 Dogs.

“Some small ball. We had the leadoff guy get on, hit and run with Vidal, it was successful. We sac bunted twice, one of them turned into a run on the error. Navas got down a great bunt on that, and then Cabrera drives home the run on the sac fly. Sometimes you gotta play small ball and it worked out for us tonight,” said RiverDogs manager Pat Osborn.

Kolton Mahoney (BS 2, W 1-2, 1.04 ERA) held the Birds to one run in three innings pitched. He struck out four, allowing one walk and three hits. He worked himself into bases loaded, no out jam in the seventh, but pitched out of it by striking out Fajardo and Frank Crinella, then inducing a groundout to second base from Alejandro Juvier. “Kolton threw the ball well. He had a jam shot base hit that got through, the tying run scored on that. But he got out of a bases loaded no outs jam without giving up a run. Anytime you do that, you’re doing a heck of a job,” Osborn said.

Anyelo Gomez (S 7, 1.93 ERA) came into the game in the ninth to close it out. He struck out Grim to start the inning but ran into some trouble by walking Preston Palmeiro and then allowing Fajardo to single to put runners on first and second. Gomez extinguished the threat by blowing away Crinella with a 96 MPH fastball and then closed it out with a 97 MPH fastball to strikeout Juvier. “They had a chance, tying run on base, but it’s a good feeling going to Gomez in the ninth. Yesterday, he was unavailable. Tonight, we had him, and he’s tough,” Osborn said.

The RiverDogs have taken two of the first three games of the four-game set against the Shorebirds. The series and homestand finale is Monday night at Joe Riley Park. The RiverDogs improve to 15-16 on the season with the win, and the Shorebirds drop to 14-16 with the loss.