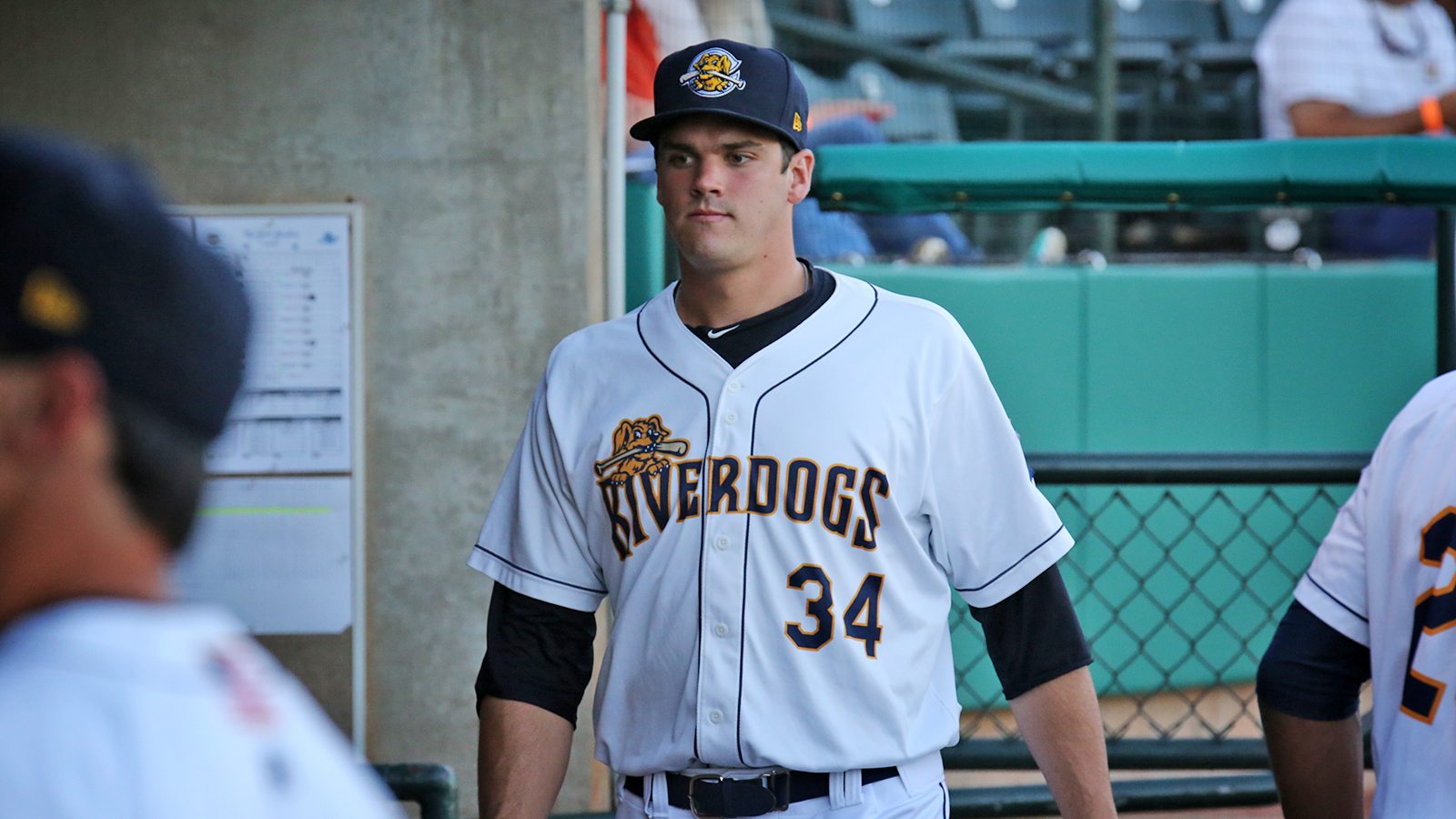 Feature Sized – Charleston RiverDogs pitcher Garrett Mundell in the dugout during a game against the Lakewood BlueClaws at Joseph P. Riley, Jr. Park in Charleston, SC on Tuesday, May 2, 2017. (Martin Griff)

The Charleston RiverDogs defeated the Augusta GreenJackets 5-3 Friday night at Joe Riley Park to even up their four game series. David Sosebee earned the win in relief of RiverDogs starter Nick Nelson while Melvin Adon took the loss for the GreenJackets.

The Dogs jumped out on top in the bottom of the second inning. Blake Rutherford reached on an error by shortstop Brandon Van Horn who charged a ground ball that slipped under his glove. Adon threw the ball away trying to pick off Rutherford allowing him to advance all the way to third. Donny Sands drove home Rutherford with a sacrifice fly to left field to give the Dogs a 1-0 lead. After Isiah Gilliam lined out to right field, Brandon Wagner drew a walk. Carlos Vidal followed that up with a ground ball single through the right side of the infield. Rightfielder Sandro Fabian threw the ball away after fielding the ball allowing Wagner to go to third and Vidal to second. Oswaldo Cabrera lofted a single to right field to bring home Wagner and Vidal and give Charleston a 3-0 lead.

In the top of the fourth, Augusta fought back with two runs of their own. After Nelson retired Frandy De La Rosa and Shawon Dunston Jr., Manuel Geraldo walked. That set the stage for the strangest play of the night. Ryan Kirby drilled a ball that appeared to hit off the right field scoreboard for a home run, but the umpires ruled the ball hit the wall and was in play. Geraldo scored on the play and Kirby ended up on third as a triple. Jackets manager Carlos Valderrama argued the call to no avail and was thrown out. Van Horn singled in Kirby and the GreenJackets cut the Dogs lead to 3-2.

“From where I stand, it’s tough especially when it gets up into the light of that video board. The way our outfielders played it. It looked like a home run. We say something in baseball that the ball never lies, and they get the run anyways. So it worked out for them,” RiverDogs manager Patrick Osborn said of the play.

The Jackets would tie up the game in the top of the fifth when Nelson hit Fabian with a pitch and Beltre served a single into right. De La Rosa followed with another single to right off RiverDogs reliever David Sosebee to load the bases. Geraldo tied up the game at three with a ground out to second baseman Angel Aguilar who went to second base to get the force out, but brought home Fabian for an RBI. “I thought he threw the ball really well, probably the best start since the injury, since the hamstring injury. The start prior to the injury was really, really good. That looked like that start. I think that the delay there when they had the discrepancy on the home run call, I think that came into play for him. I think he was out there for about a good five to almost ten minutes without pitching. He threw the ball really well. Good, powerful fastball. Good breaking ball. He threw some nice changeups tonight,” Osborn said of Nelson’s start.

Charleston would take the lead for good in the sixth. Rutherford walked and Donny Sands singled. Rutherford advanced to third on Sands single, but Sands was thrown out trying to advance to second on the play. Gilliam then ripped a triple down the right field line into the corner that drove Rutherford in to give the Dogs a 4-3 lead and chasing starter Melvin Adon (L, 0-4, 4.56 ERA) out of the game. Wagner then hit a ball through the right side of the drawn in infield off reliever Sandro Cabrera to bring in Gilliam and give the Dogs a 5-3 lead.

“Prior to this game, we had an inside scoop on the pitcher today. He’s probably the hardest thrower thus far during the season and just our hitting coach told us to get it ready early and expect the fastball and don’t miss it. We took that aspect during the whole game,” Gilliam said of the RiverDogs approach to facing Adon.

Sosebee (W, 2-1, 3.55 ERA) pitched four innings allowing just one hit and striking out five batters to earn the win. Garrett Mundell (S, 3, 2.87 ERA) picked up his third save of the season with a perfect ninth, striking out two of the three batters he faced. “Tremendous job, (Sosebee) came in bases loaded, nobody out, and gave up one run and cruised from there on out. Great job by Sose and great job by Mundell and Nick Nelson gave us a nice start, good team effort,” Osborn said.

The RiverDogs get a chance to get back to .500 on the season and are at 20-21 after the win. Augusta drops to 13-26 on the season. The season series is now tied at four games a piece. The two teams take the field at 6:05 PM tomorrow night at Joe Riley Park for the third game of their four game series.