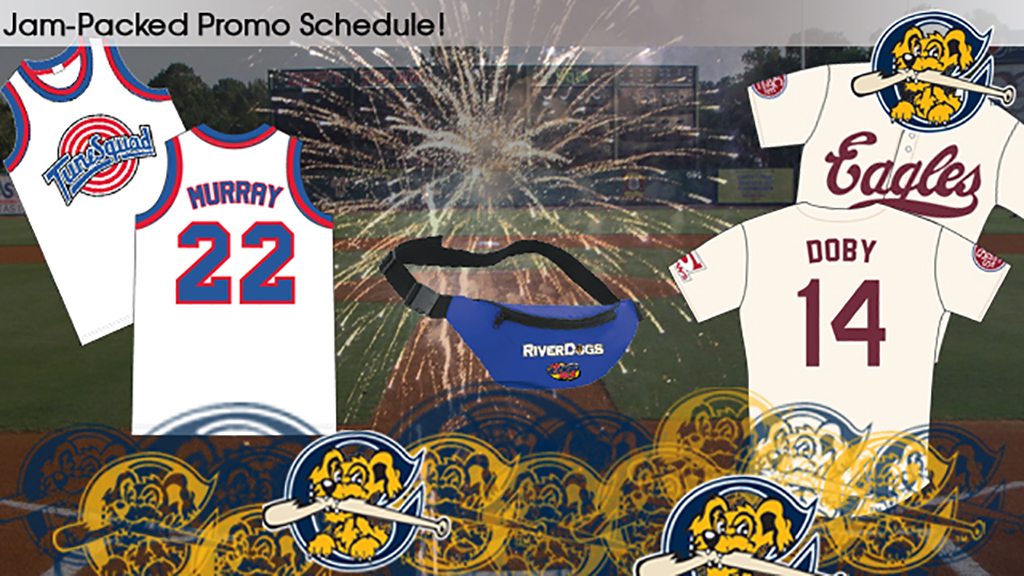 CHARLESTON, SC – The Charleston RiverDogs’ promotional schedule is historically highlighted by unique promotions, desired giveaways, explosive fireworks and special nights, and the 2015 version is no exception.

Headlined by Bobble Boobs giveaway, which is the RiverDogs’ matchless way of bringing awareness to breast cancer, and the special “Shoes for Joe” night that honors Greenville native Shoeless Joe Jackson, the 2015 Charleston RiverDogs promotional schedule has a little something for everyone and a lot of fun for all.

Another spectacular highlight of the promotions calendar is the Bill Murray replica “Tune Squad” jersey giveaway on April 25.

The season gets underway with Opening Night, April 9, when the Lexington Legends come to Joseph P. Riley, Jr. Park to begin a seven-game homestand. The Opening Night festivities feature an extended postgame fireworks display and fans will receive free magnet schedules that are sponsored by SC 811.

“As our fans have come to expect, we have a fun-filled slate of promotions and theme-nights,” said General Manager Dave Echols. “There will never be a dull time at the ball park this year.

“We’ve increased the number of postgame fireworks nights, our giveaways are of better quality, and we’ve added a few more wrinkles that should make everyone smile as they enter and depart from Riley Park.”

Fans are encouraged to visit www.RiverDogs.com, or call the Box Office at 843/577-DOGS (3647) for tickets and additional information. If you can’t make the games, remember that RiverDogs baseball can be heard throughout the season on the flagship radio home, WTMA 1250AM.