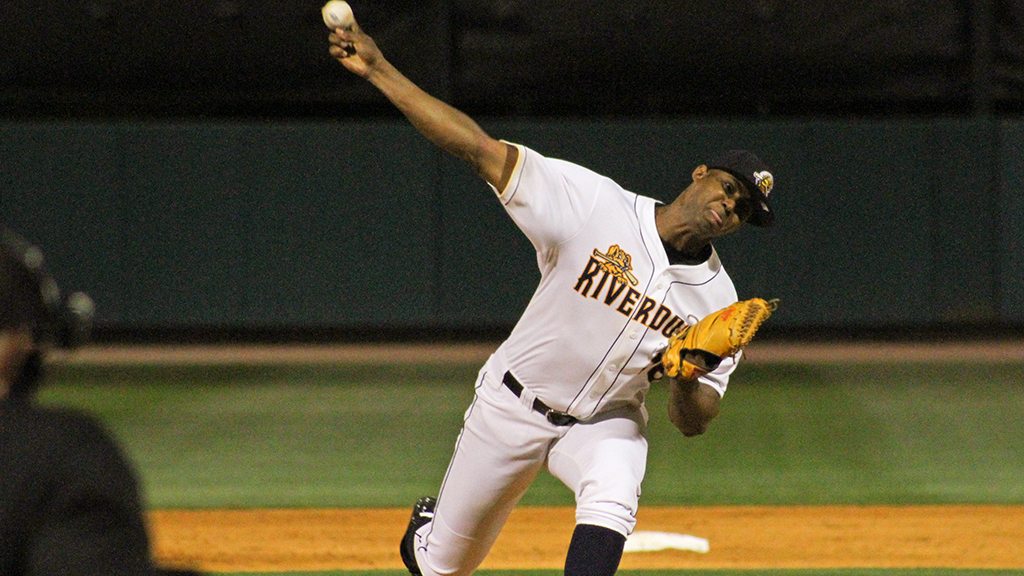 Right-handed pitcher Domingo Acevedo got the start, throwing his fastball in the high-90s (Jerry Coli)

In front of a crowd just north of 6,400 people the Charleston RiverDogs walked off with the Opening Day victory over the Columbia Fireflies at Joseph P. Riley Ballpark.

Acevedo, was touched for 3 runs in the top of the fourth inning when he experienced a dip in velocity and the Fireflies’ hitters were able to put the bat on the ball.    He threw throwing 3 2/3 innings allowing 3 runs on 6 hits and striking out 5 of the 18 batters he faced while throwing 51 out of the 73 pitches he threw for strikes.  Early in the game he was hitting the high-90s on the radar gun but experienced a dip later in the game.

Taking over for Domingo in the fourth inning was Travis Hissong.  Hissong allowed 1 run on 1 hit and 2 walks, striking ut 2 batters in 2 1/3 innings of work before James Reeves took the mound in the sixth inning.  Reeves would complete the game, throwing 3 shutout innings allowing just 1 hit and a walk while striking out 2 batters.

The RiverDogs got 1 run in the bottom of the fifth inning, Kendall Coleman walked to start off the inning and then moved to second on a 2-out walk by Jeff Hendrix.  Hoy Jun Park was then hit by the pitch to load the bases before Trey Amburgey worked the walk to force home a run and earn the only RiverDogs RBI of the game.

Charleston would make the game interesting in the ninth inning, plating 2 runs.  Kendall Coleman and Angel Aguilar drew back-to-back walks to bring up Eduardo Navas.  Navas grounded a single to right field to bring home Coleman and send Aguilar to third.  Hoy Jun Park then worked a walk to load the bases for Trey Amburgey who earned a walk with the bases loaded for the second time in the game, bringing home Aguilar.  That brought up Chris Gittens.  With a full count on Gittens, Fireflies pitcher Johnny Magliozzi would attempt to pick off Eduardo Navas but Navas would score and tie the game stealing home while Hoy Jun Park scored the winning run on a throwing error by the pitcher to give the RiverDogs the victory, James Reeves was named the winning pitcher.

Outfielder Trey Amburgey had 2 RBI’s in the game, both coming on bases loaded walks while Jeff Hendrix, Jhalan Jackson, Kyle Holder and Eduardo Navas had the 4 Charleston base hits.  In total Amburgey walked 3 times in the game and id not strike out.  Tomorrow night these two teams will meet again with Will Carter scheduled to make the start for the RiverDogs.