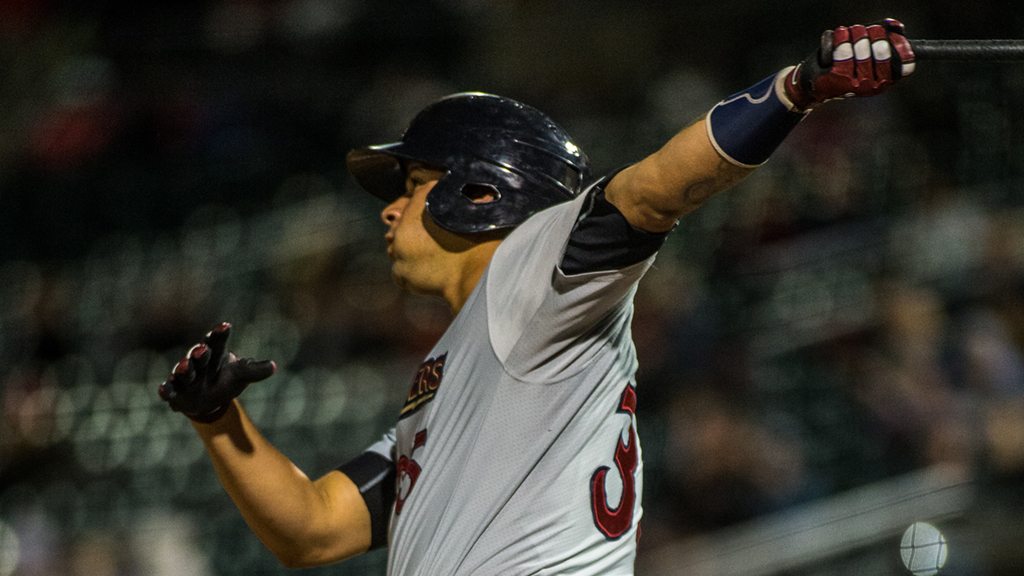 Gary Sanchez's homered in his first at-bat after returning from injury Tuesday. (Photo by Cheryl Pursell)

INDIANAPOLIS, IND – In at-bat that never should have happened, Gary Sanchez delivered the clutch hit that made all the difference as the SWB RailRiders (Triple-A/New York Yankees) beat the Indianapolis Indians (Pittsburgh Pirates) at Victory Field on Saturday night, 7-3. The RailRiders (25-19) have won eight of 10 and guaranteed themselves a winning road trip, while the Indians (21-20) have lost the season series between the clubs.

Down 2-0 with two men on base and two outs in the third, Aaron Judge grounded a ball to shortstop Gift Ngoepe. The subsequent flip to second base arrived in plenty of time to force out Ben Gamel, but second baseman Alen Hanson errantly missed his stomp of second base to load the bases. Sanchez, the next man up, smashed a three-run double down the third-base line for a 3-2 SWB lead.

SWB starter Chad Green, who gave up a homer to Danny Ortiz and a bloop RBI single to Adam Frazier in the second, settled and then some. In his first start since his big-league debut on Monday, Green (3-3) retired the final 11 he faced and struck out seven over six innings for the win. He entered the game trailing only his Saturday-night counterpart, Chad Kuhl, for the IL lead in ERA.

Kuhl (3-1) surrendered a home run to Jake Cave leading off the fourth and gave up four runs (one earned) over his six frames. The University of Delaware alumnus suffered his first career Triple-A loss.

Indy would commit four more errors, all on the infield, as the RailRiders added an unearned run in the seventh and two more in the eighth. The only RBI on those scores was credited to Chris Parmelee.

Anthony Swarzak gave up one run on a Max Moroff homer over the final three innings for his fourth save overall and in as many outings.

The RailRiders return home for a short three-game series and homestand against the Louisville Bats (Cincinnati Reds) on Tuesday, May 24 at 6:35 p.m. The $2 Twosday features $2 lawn seats (walk-up only), $2 tacos and $2 tall boy beers. For tickets or more information, please call 570-969-BALL (2255) or visit swbrailriders.com.

Gary Sanchez’s timely double made for the RailRiders’ only hit in 12 tries with a man in scoring position.

Indianapolis was charged with five errors, all on the infield, making six of the seven runs unearned.

In 10 games with this year’s RailRiders, Jake Cave has gone 13-for-39 with eight extra-base hits, eight RBIs and nine runs scored, slashing .333/.350/.692/1.042 with just four strikeouts. He doubled, homered and scored twice on Saturday.

Pete Kozma walked, scored and stole his fourth base, but went 0-for-3 to lose a season-best seven-game hit streak.

The paid attendance of 13,900 made for the biggest crowd to see the RailRiders play this season.

In his first big-league start of the year, SWB alumnus Rob Refsnyder authored a 10-pitch at-bat that resulted in a two-run double during the Yankees’ 5-1 win at Oakland. He started in right field for the first time with the Yankees and finished 1-for-3.