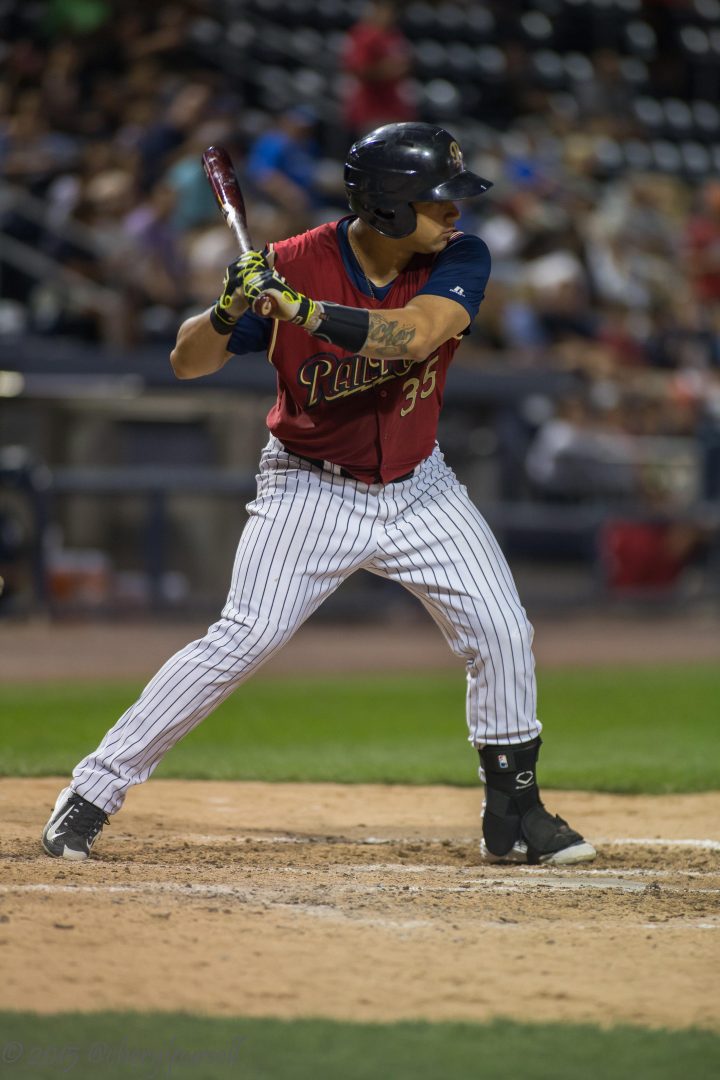 Gary Sanchez doubled on a four-hit night but his SWB RailRiders (Triple-A/New York Yankees) fell to the Syracuse Chiefs (Washington Nationals) at NBT Bank Stadium on Friday night, 4-3. SWB (8-7) has lost three in a row for the first time this season, while the Chiefs (7-8) played their league-high eighth one-run game and logged their league-best fifth such win.

Down 2-0, Sanchez got the RailRiders on the board with a third-inning single that scored Ben Gamel. That deficit turned into a lead in the fifth when Nick Swisher slammed a two-run homer to right field off of starter Taylor Hill.

In the bottom of that same frame, the Chiefs plated the game’s final runs on a two-run triple by Jason Martinson.

Reliever Abel De Los Santos (1-0) got the win in his Triple-A debut. SWB starter Chad Green (0-2) took the loss. He allowed four runs (two earned) on five hits and three walks over 4.2 innings, whiffing three. Trevor Gott worked around a pair of ninth-inning hits from Aaron Judge and Sanchez to log his first save.

The RailRiders return home for a three-game renewal of the IronRail Series against the Lehigh Valley IronPigs (Philadelphia Phillies) on Monday at 6:35 p.m. The $1 Monday promotion features $1 lawn seats (walk-up only), $1 hot dogs and canine dogs will be allowed entrance for just $1. For tickets or more information, please call 570-969-BALL (2255) or visit swbrailriders.com.

Gary Sanchez’s four hits tied a career-high mark now reached five times. Last season, he ended a 4-for-40 drought with a home run on Aug. 22, 2015 versus Rochester. The next night he went 4-for-4 with a pair of doubles and two runs scored. On Thursday night, he halted a 1-for-16 skid with a home run at home against Buffalo. He followed that tonight with a 4-for-5 showing that saw him double twice, drive in a run and score a run.

Eight of Sanchez’s 11 hits on the young year have gone for extra bases: five doubles, one triple, two homers.

Rob Refsnyder went 1-for-3 with two walks and notched a pair of steals.

Reliever Conor Mullee tossed a scoreless and hitless eighth inning. He also issued a full-count two-out walk to Brian Goodwin, the first free pass he has issued at Triple-A. He entered the plate appearance with 16 strikeouts against no walks over 10.1 innings at the minors’ highest level.

The RailRiders went 2-for-14 with men in scoring position, stranding 12.

On Saturday, the RailRiders will attempt to avoid their first four-game losing skid since dropping four in a row from July 8-11, 2015. That run started with a pair of losses to Syracuse and concluded with successive setbacks at Buffalo. This current three-game skid began with two home losses to Buffalo, and continued with a road setback at Syracuse.