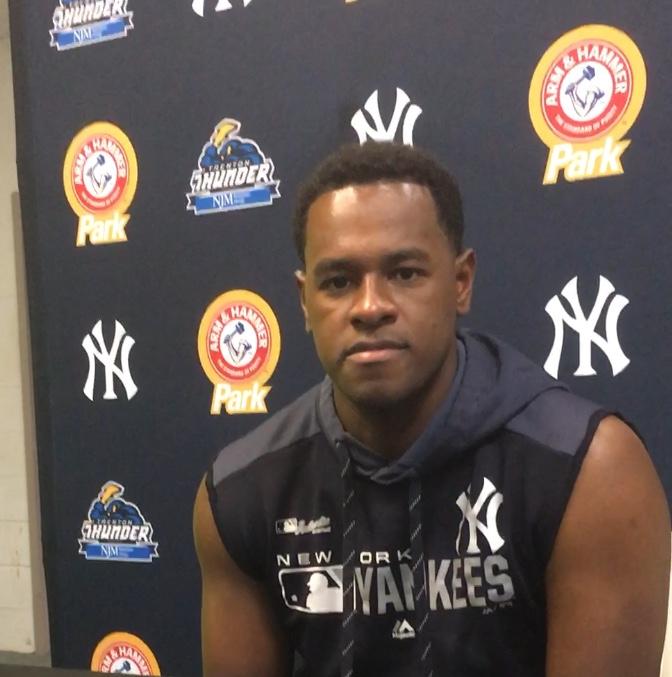 TRENTON – On a cool 60-degree night with autumn-like wind gusting through the misty rain falling at ARM & HAMMER Park, rehabbing Yankees ace Luis Severino took the ball for Trenton with a chance to send the Thunder to their third Eastern League championship series in the last four seasons. It is the exact scenario that the organization hopes will play out in the Bronx in the coming weeks as they envision Severino making a return from a season long absence to bolster their pitching staff for an extended postseason run.

The 25-year old Severino, who was making his second and possibly final rehab appearance after missing all season due to right rotator cuff inflammation and a right lat injury, tossed exactly 50 pitches (37 strikes) over three-plus innings in the series clinching 12-2 victory over the Reading Fightin’ Phils. Severino then tossed five additional pitches in the bullpen after being removed in the top of the fourth inning.

The right-hander showcased elite velocity, sitting 94-96 MPH with his heater and flashed 97 on multiple occasions; he allowed five hits and one earned run (a solo homer to Darick Hall in the second inning). He fanned five batters and did not issue a walk.

“I feel good, way better than the first time,” admitted Severino. “I think that my presence and my momentum on the mound – I felt like myself and everything was good.”

Severino added, “I think in the first outing I was trying to do too much. All of the things that have been talked about like the tipping or commanding my fastball – I tried to put everything into that outing and it was too much. Today I went out there and focused on one thing at a time.”

Yankees manager Aaron Boone stated earlier in the day when addressing the media from Boston that if all went well for Severino during his start, there was “a chance” that he could rejoin the team in the days ahead.

“I feel good and if they need me, I would definitely go,” Severino said. “That is for them to decide, but for me I feel ready, I felt good today. Everything was sharp —breaking ball, except for that changeup homer, but whatever. We can fix that.”

Severino added, “What I was looking for today, it was there. The break of my secondary pitches and my fastball command, so I feel that I’m ready to help my team out there.”

After Matt Wivinis completed the fourth inning that Severino had started, rehabbing reliever Dellin Betances jogged out of the right field bullpen for his first game action of 2019. The 31-year old hurler had been out of action with a right shoulder impingement that was diagnosed during spring training after his diminished velocity drew concern from the organization.

In his one inning of action, Betances tossed 19 pitches (11 strikes) and flashed velocity that sat 92-93 MPH. While he did not approach his career fastball velocity average of 97.9, this outing was comparable to a first spring training outing.

“That’s the hardest that I have thrown this year; I wasn’t like that in spring,” Betances said. “For me, it always takes a little bit, so the more I pitch, the better it will be. I think today was a good step.”

Betances worked into a full-count against the first man he faced, Jack Conley, before plunking him with a 94-mph fastball. The 6-foot-8 righty then balked him over to second but promptly induced a liner to short and fanned Phillies highly-touted prospect Mickey Moniak with his patented breaking ball. Betances would issue another walk but escaped any damage by generating a comebacker from Hall to escape the frame. 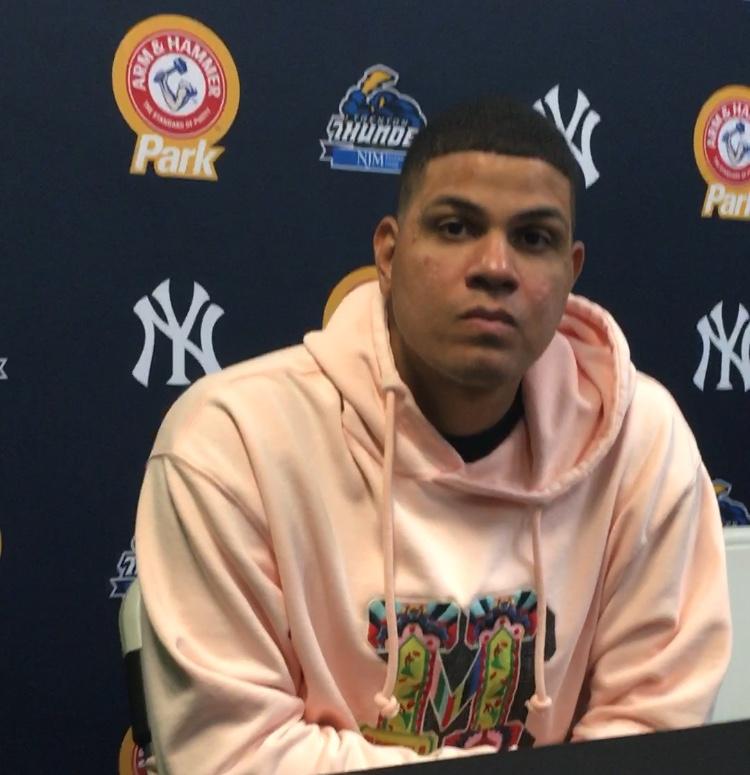 “It’s good to finally be back on a mound pitching in a real game,” said Betances. “Obviously, I haven’t done it since spring, so it was good. First one, I got myself in a situation. I balked, so that means I’m in form.”

While it has not been planned out specifically because of the uncertainty of Triple-A Scranton’s postseason fate, Betances said he expects to pitch in Trenton again next week.

Perhaps the most impactful rehabber of Friday night’s trio was infielder Thairo Estrada, who batted second and play second base for five innings. Estrada, who has been on the injured list since Aug. 18 with a right hamstring strain went 3-for-3 (double and two singles) with a walk and tied a franchise postseason record with 5 RBI on the night.

“Thairo Estrada – this kid is some kind of baseball player,” said Thunder Manager Pat Osborn. “The New York Yankees are lucky to have him. I have always thought so much of Thairo.”

Osborn said that Estrada would join Scranton on Saturday because the Yankees want him to play everyday and having secured an ELCS berth on Friday, the Thunder are not slated to play again until Tuesday.