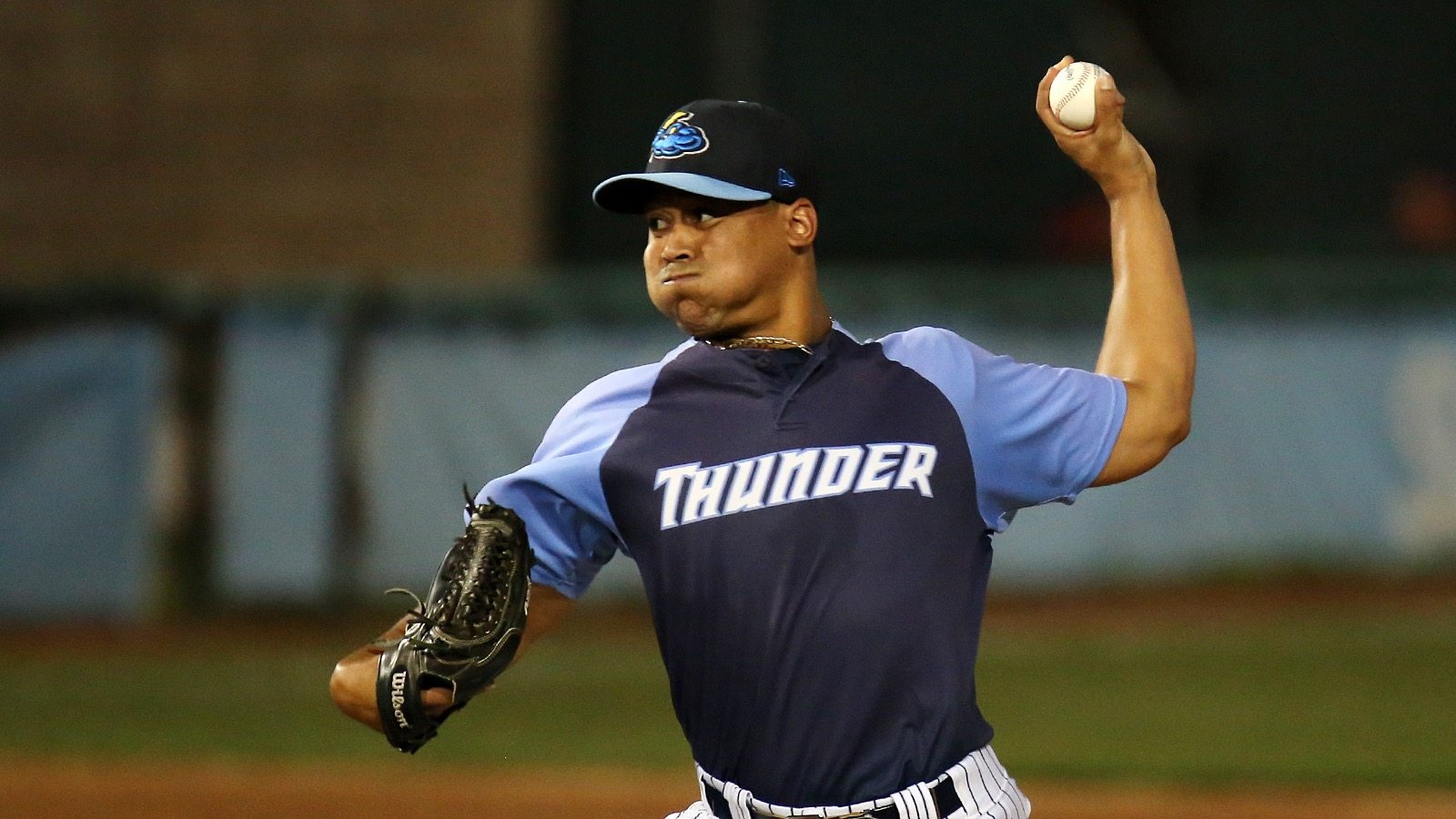 TRENTON, NJ – Justus Sheffield, in his second day with the Double-A Trenton Thunder, got up from his locker and took a deep breath Saturday.

“This last month has been a real whirlwind,” the 20-year-old left-handed native of Tullahoma, Tenn., said. “It really went so fast, going from my old team (the Lynchburg Hillcats) to a new team (the Tampa Yankees) and then getting called up to Double-A.

“We had a rainout (Thursday) and I didn’t throw, and then I got the call. I got a flight and had no idea when I was going to pitch. Then I woke up the next morning (Friday) and was told I was going t0 throw. I had to get ‘locked in’ now.”

Sheffield, who throws a fastball that sits at 93 and can reach 96, a plus-plus curve that is his out pitch and a changeup he has excellent feel for, came to the Yankees system July 31 in the Andrew Miller deal with righty relievers Ben Heller and J.P. Feyereisen, now a Thunder teammate, and outfielder Clint Frazier.

He is 10-6, 3.09 in 25 starts with Lynchburg, Tampa and now the Thunder. His strikeout/walk ratio is an excellent 129-53. His start vs. powerful Reading Friday, in which he threw four innings, recorded nine strikeouts, allowed two hits, three walks and an unearned run, was a baseball test of fire.

Sheffield threw 80 pitches, 49 strikes and got a chance to familiarize himself with Reading’s lineup before the Eastern League Division Series, which opens Wednesday in Trenton.

“He really showed some great stuff,” said Thunder manager Bobby Mitchell. “He overthrew a bit. Having a bit 0f nerves is certainly understandable in a first start at this level.”

Sheffield agreed nerves were affecting him.

“I really had no clue who I was pitching against,” said Sheffield. “They told me later. For the first few innings, I felt like the ball was flying out of my hand. Then I settled down and started to hit my spots.

“I had a lot of deep counts, which helped push up my pitch count, but I was pleased with what I did, especially after I found out about some of the hitters I faced and what they had done. All I try to do, no matter who is in the box, is compete and get outs.’

He saw first-hand how the Thunder, which is an outstanding 86-54 heading into Sunday evening play, compete and pick up each other Friday night, as the bullpen shut down the Fightin’ Phils and home runs by outfielder Dustin Fowler and first baseman Mike Ford brought Trenton a 2-1 victory.

“It was the way to start with a new team,” Sheffield said.

The Yankees were impressed with what the 5-foot-10 Sheffield, who was signed by Cleveland scout Chuck Bartlett to a bonus of $1.6 million, impressed the Yankees in his five Tampa starts, in which he went 3-1, 1.73 in 26 innings, with his ability to throw strikes with all three pitches. He is still working to be more consistent with his command.

He was a key part of that Miller trade, and got the “official” call from Yankees general manager Brian Cashman that welcomed him to the Yankees organization.

“It really was awesome,” he said.

Now, if the Thunder can somehow get by Reading in the best-of-five Eastern League Division Series, and Akron qualifies and gets to the Eastern League Championship Series, Sheffield will likely face several former Lynchburg teammates who are now playing with the RubberDucks.

“I heard several of the guys were promoted,” Sheffield said. “That would be interesting.”

Meanwhile, Sheffield knows what he has to do to stay successful on the mound, at any level.

“Just keep the ball down,” he said.