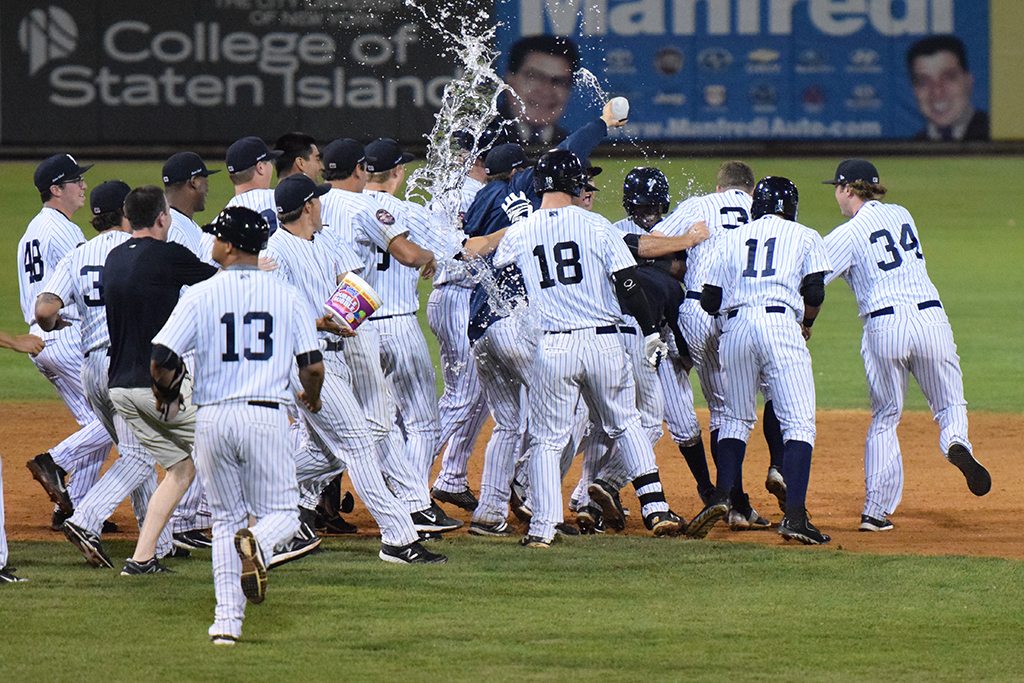 Will the Staten Island Yankees be celebrating once again? (Robert M Pimpsner)

With their victory Sunday evening the West Virginia Black Bears advanced to the New York – Penn League Championship series against the Staten Island Yankees.  The Black Bears are in their first season while the Yankees are making their seventh trip to the finals.

When these two teams met in the regular season it was late July and the Yankees were in the middle of a long six-game road trip that just saw Staten Island being swept by the Mahoney Valley Scrappers.  When they pulled into West Virginia on July 23 the Baby Bombers were a different team.  Matt Borens and Yoel Espinal were in the starting rotation, outfielder Trey Amburgey had yet to be promoted and infielder Kevin Cornelius was just getting his first taste of Short Season-A.  At the time of their first meeting the Staten Island Yankees were hitting just .244 for the season while their pitching had a combined 3.25 ERA.

Fast forward to now.  Outfielders Zack Zehner and Jeff Hendrix have been the top of the order 1-2 punch the Yankees lacked for most of the season.  Shortstop Kyle Holder was moved down to a more appropriate spot in the lineup while Trey Amburgey, Junior Valera, Thairo Estrada and Kevin Cornelius became a formidable middle of the lineup.  Catcher Eduardo de Oleo became a key contributor towards the end of the season, after struggling to hit during the first part of the season.

On the mound Domingo Acevedo has put early struggles behind him to become one of the top pitchers in the entire league.  New York Yankees first round pick James Kaprielian and second round pick Jeff Degano have joined the team and impressed.  Right-hander Kolton Mahoney has been equally as impressive, pitching back-to-back 7 inning games to end his regular season while Luis Cedeno continued to be one of the most consistent starters the Yankees ever had.

Suffice to say the Staten Island Yankees team making the trip to Morgantown, West Virginia on Monday night is a different team than the one that did so in late June.  The Yankees have been the top hitting team in the playoffs thus far with a combined team average of .318, 27 hits over 85 at bats across 2 games.  The Black Bears have managed to hit just .200 as a team with 19 hits over 95 bat bats across 3 games.  Yankees batters have hit more doubles (6) and homeruns (2) than any other team in the post-season.

The top 3 hitters this post season are all in the Yankees lineup, while a fourth sits tied for fifth in the playoffs.  Shortstop Thairo Estrada leads the way with a .600 average, Brandon Wagner is next hitting .500 while Eduardo de Oleo is hitting .444.

On the pitching front West Virginia posted a 1.38 team ERA with 26 strikeouts over 26 innings pitched.  Staten Island on the other hand has a post-season team ERA over 3.15 with 15 strikeouts over 20 innings pitched.  The Yanks allowed fewer walks and a lower WHIP.  The Black Bears will be facing a trio of starting pitchers that they have not seen and 3 of the Staten Island Yankees hurlers to boot.

Kolton Mahoney will get the ball tonight in his first post-season appearance. His last time out was on September 6 when he threw 7 shutout innings against the Brooklyn Cyclones.  That game was the second consecutive game he threw 7 innings.

Game 2 starter James Kaprielian was nothing short of magnificent in his last outing to open the 2015 New York-Penn League Playoffs.  The New York Yankees top pick pitched a career high 6 innings, allowing a run all while throwing just 68 total pitches.

If the series goes to a game 3 West Virginia will face off against Domingo Acevedo.  The hard throwing right-hander who has impressed many this season and was recently named the Short Season pitcher of the year.  Acevedo earned the win that advanced Staten Island to the championship round in his last outing.  He pitched 6 innings of 1-run ball while striking out 4, throwing 84 pitches.

Coming into the post-season the West Virginia Black Bears had a better record but due to the Staten Island Yankees being a division winner and the Black Bears the wild card, the Yankees will have home field advantage.  On Tuesday night West Virginia will be making their first trip ever to the big apple; having never played underneath the lights of New York City and in a ballpark that has twice the capacity.  Could that factor in?  Only time will tell.

One thing is for sure, the Staten Island Yankees have history on their side, they have never lost in the championship series.