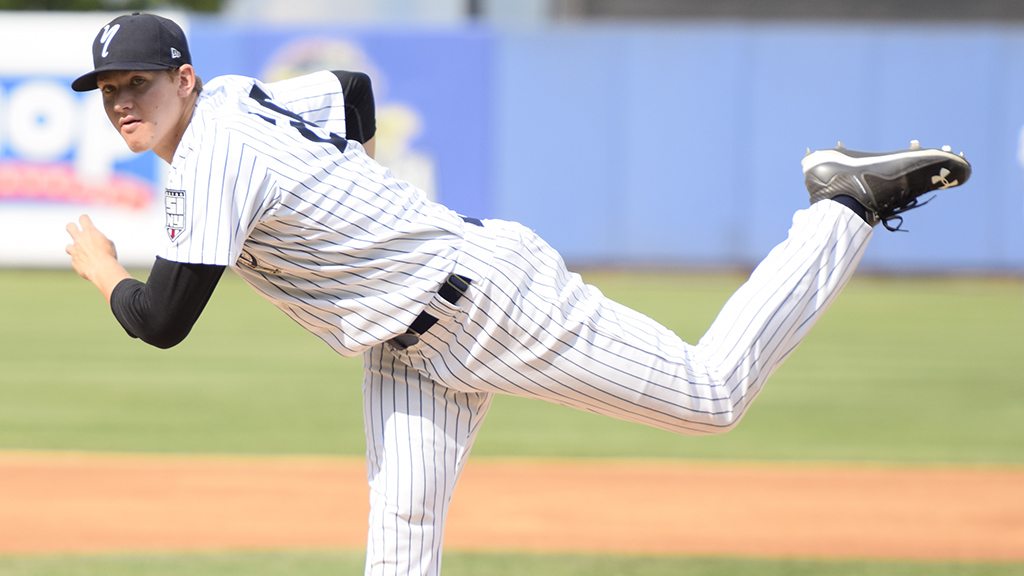 LOWELL, MA – The Staten Island Yankees completed a 3-game sweep of the Lowell Spinners on Sunday thanks to their solid pitching staff and timely hitting. For the third consecutive game the Yankees starter was impressive, this time second round pick Jeff Degano threw 3 shutout innings in his second start for the Baby Bombers.

Degano was making his second start for Staten Island and his first start on the road.  He was solid on the hill allowing just 1 hit and 1 walk to the Spinners while striking out a career high 4 batters.  Overall he threw 46 pitches with 29 of them for strikes.  Jeff did not factor in the decision but was impressive as he lowered his season ERA to 3.38 with the Baby Bombers.

Taking over for Jeff Degano on the mound in the fourth inning was right-hander Yoel Espinal.  Espinal allowed a hit and 2 walks in his 2 innings of work, striking out 2 Lowell hitters in the process.  Taking over in the sixth inning for the Baby Bombers was Will Carter who went on to earn the win, his first as a professional.  Carter pitched 3 no-hit innings with the only base runner to reach against him to do so via a fielding error.  Out of the 10 batters he faced struck out 2 of them while throwing just 36 pitches.

The Staten Island Yankees took the lead in the top of the seventh inning with Trey Amburgey starting it off with a sharp line drive to left field for a leadoff triple.  After a ground out Eduardo de Oleo would send a ground ball into left for a RBI single, bringing home Amburgey for the first run of the game.  Drew Bridges then sent a soft line drive to the third baseman that he beat out for an infield single and putting men at first and second with 1-out. Jeff Hendrix then grounded into a force out at second base with Bridges being called out on the play and Hendrix reaching safely thanks to a throwing error that also allowed de Oleo to score.

Staten Island was not done scoring as they added 2 more runs in the top of the eighth inning.  Thairo Estrada started the inning off with ground ball single to center, moved to third on 2 consecutive ground outs before scoring on an infield single to short by Trey Amburgey.  Amburgey then stole second, putting him in position to score on a line drive single to centerfield by Ryan Krill.

Trey Amburgey has continued his hot hitting since turning prop with 3 hits and 2 runs scored in the game pushing his batting average to .500 since joining Staten Island. Thairo Estrada and Ryan Krill each had 2 hits in the game while Eduardo de Oleo and Drew Bridges rounding out the rest of the Yankees offense.

On Monday night the Staten Island Yankees return home to start a 5 game series with the Aberdeen Ironbirds that features back-to-back double headers on Tuesday and Wednesday.