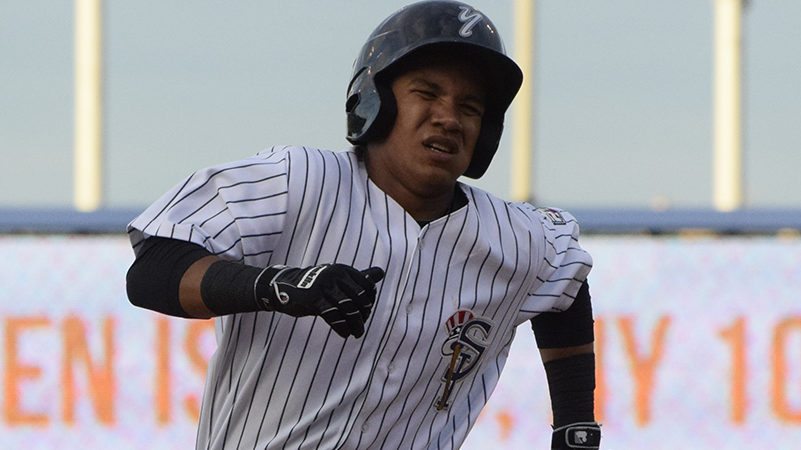 Thairo Estrada rounding the bases when he injured himself in 2014.

STATEN ISLAND, NY – The Staten Island Yankees fell to the Hudson Valley Renegades in a Fourth of July contest at the Richmond County Bank Ballpark.

Justin Kamplain got the start for the Baby Bombers, the young lefty pitched only two innings allowing just a hit and a walk while striking out two in his fourth appearance of the season.  He has yet to allow a run in his professional career.

The Staten Island Yankees were the first to get on the board, plating a run in the bottom of the third.  With two outs Thairo Estrada singled on a fly ball to right and then came home on a RBI double to center field by Chris Breen.  While running in between second and third Estrada tweaked his leg, causing him to leave the game.

Dillon McNamara was next on the hill for the Yankees.  The Staten Island native threw four shutout innings, allowing just two hits and a walk while striking out four batters.  He was followed by left-hander Ethan Carnes who did not allow a run in his lone inning of work.  Andury Acevedo was next tossing an inning and allowed the tying run on one hit.

Jose Pena relieved Acevedo and earned the loss, allowing three runs on two walks and a hit by pitch in two-thirds of an inning.  Matt Wotherspoon closed the game tossing just a third of an inning allowing a hit.

Tonight these two teams will meet again as the Staten Island Yankees will travel to Fishkill, NY.  Jordan Foley is scheduled to make the start for the Baby Bombers.