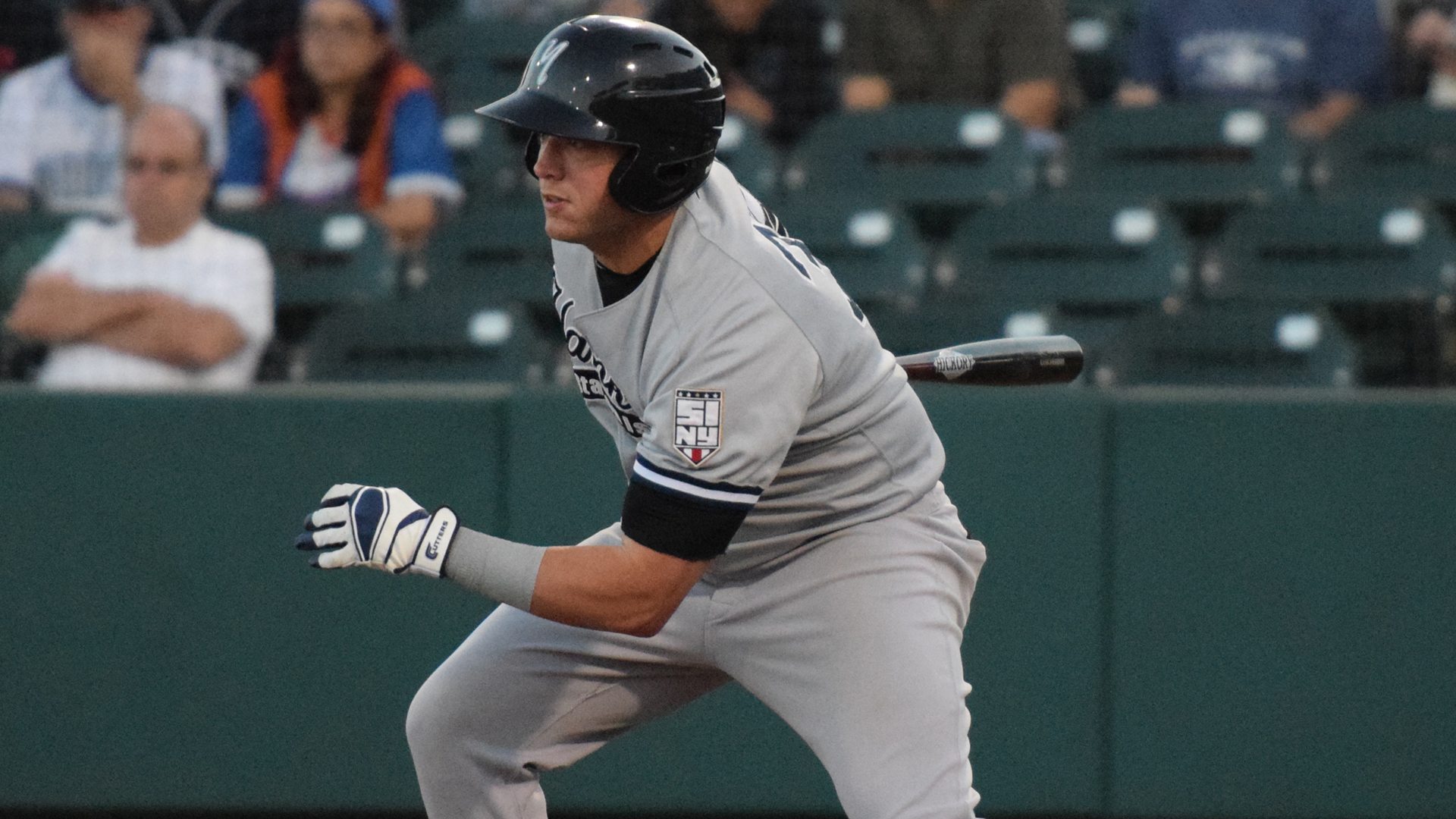 After a long over-night bus ride the Staten Island Yankees made it to Burlington, Vermont to open up their first road trip of the season with a 3-game set against the Vermont Lake Monsters.  However the pitching struggled and Staten Island fell to Vermont, 8-6.

The Yankees would strike first, plating their first run in the top of the first inning.  With 2-outs, Mandy Alvarez reached base on a fielding error by Vermont first baseman Miguel Mercedes.  That brought up Kane Sweeney who took a 1-1 pitch to centerfield for a RBI triple, plating Alvarez.

Staten Island added another run to their lead in the top of the third inning.  Ricardo Ferreira singled on a ground bacll to second, moved to second on a ground out by Nick Solak and then to third on a ground out by Mandy Alvarez.  That put him in position to score on a line drive single by Kane Sweeney, his second hit of the night and second RBI of the game.  Timmy Robinson and Drew Bridges then earned back-to-back walks to load the bases but Chris Godinez struck out swinging to end the threat.

Staten Island Yankees starter Anyelo Gomez got into trouble in the bottom of the fourth inning, allowing back-to-back singles to put men at first and second with no outs.  Gomez then walked JaVon Shelby to load the bases and issued a walk to Sean Murphy to force home a run.  With the bases loaded Gomez struck out Eli White swinging before Nate Mondou singled on a ground ball to centerfield to bring home Mercedes and tie the game.

David Sosebee came into the game to replace Gomez with the bases loaded and hit Steven Pallares with a hit to force home another run, giving Vermont a 3-2 lead.  Luis Barrera then lined a single to right field to bring home Murphy and Mondou.

The Yankees would go down in the top of the fifth inning without putting up a threat, though Kane Sweeney did walk to reach base for the third time in the game.  Sosebee came back out for the bottom of the fifth and continued to struggle, allowing a single and a double to give Vermont a 6-2 lead.  He then walked the next batter to put 2-men on base and no outs.  A wild pitch then moved both runners up 90-feet.  A fielder’s choice erased the lead runner but allowed Vermont to get runners at first and third, in position to score on a ground out.  After 5 innings the Lake Monsters earned a 7-2 lead over the McNamara Division leading Yankees.

Justin Kamplain took over on the mound for the bottom of the sixth inning.  Luis Barrera struck out to start the inning but reached on a wild pitch.  James Terrell III then singled to runners on the corners.  Jhonny Rodriguez then flew out to right field.  Miguel Mercedes then earned the RBI on a single to right field.

Staten Island plated their third run in the top of the seventh inning.  With 1-out Nick Solak and Mandy Alvarez hit back-to-back singles to bring up Kane Sweeney.   Sweeney then singled to load the bases, setting up the Yankees to score on a ground out by Timmy Robinson.

In the top of the eighth inning the Baby Bombers managed to plate three runs but were unable to tie the game.  With 1-out Kendall Coleman walked, Radley Haddad was hit-by-a-pitch and Ricardo Ferreira singled to load the bases.  Nick Solak then cleared the bases when on the third pitch of the at bat he lined a double to right field, bringing the Yankees within 2-runs.  But that was all they were able to get as the score remained 8-6.

Anyelo Gomez took the loss after being charged with 5 runs, 4 earned, in 3 1/3 innings of work.  He struck out 5 batters and walked 2 while giving up 4 hits.  David Sosebee was charged with 2 runs, 1 earned in 1 2/3 innings, allowing 3 hits and 1 walk.  Justin Kamplain allowed 1 run on 2 hits and struck out 2 in 3 innings.

On the offensive side Kane Sweeney lead the Yankees by going 3-for-4 with 2 RBIs and a walk.  Ricardo Ferreira and Nick Solak each recorded 2 hits apiece while Mandy Alvarez, and Kendal Coleman each had a hit.

On Sunday Yankees prospect Austin DeCarr is expected to make his 2016 season debut after sitting out all of 2015.  He is making his return from Tommy John surgery.