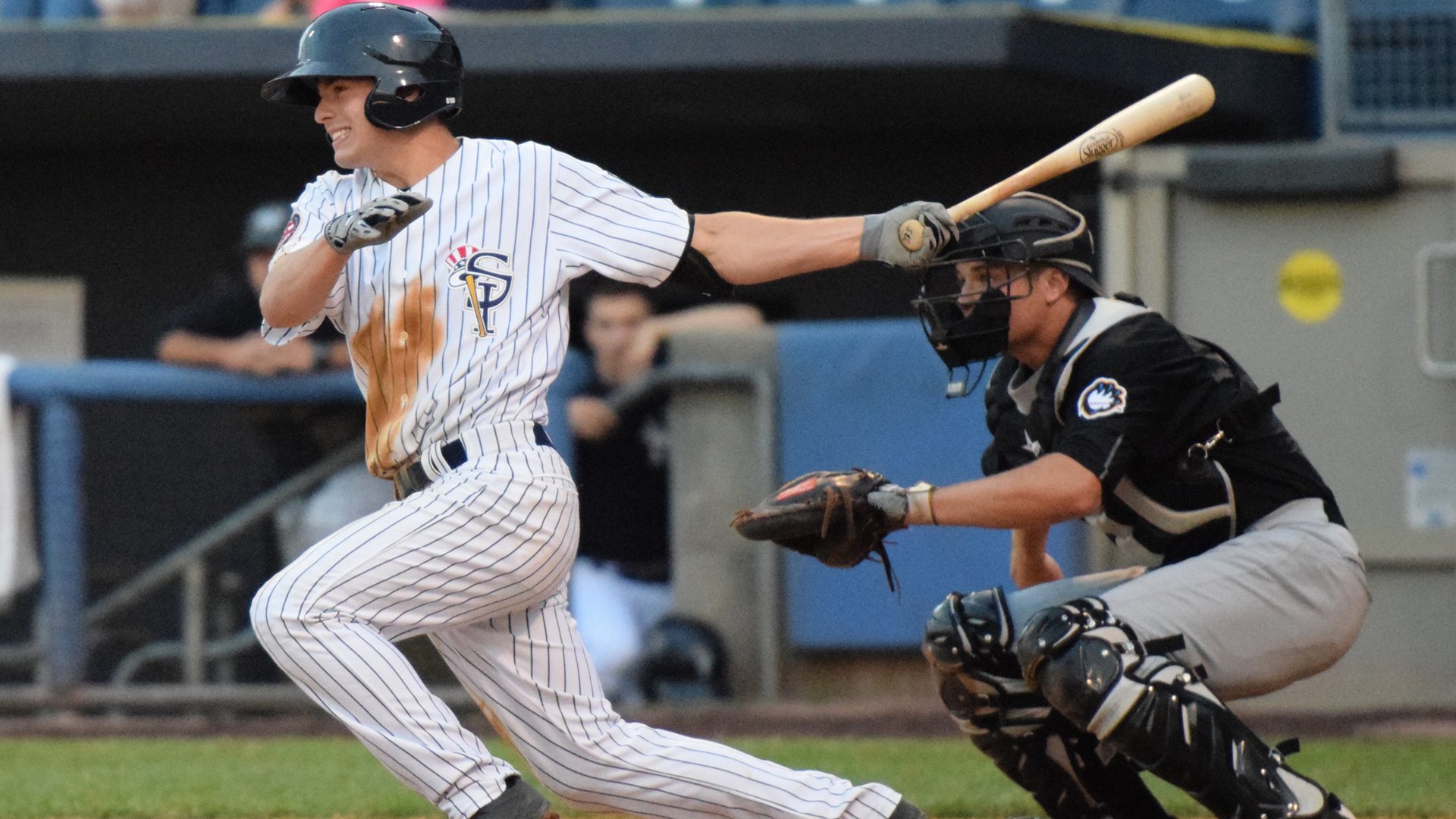 Nick Solak, the Yankees 2nd RD pick, got the go-ahead RBI on his first professional hit in the seventh inning of a game against the West Virginia Black Bears on June 23, 2016. (Robert M. Pimpsner/RMP Sports Media, Inc.)

It took 11 hits and 6 walks but the Staten Island Yankees were finally able to get their first victory over the West Virginia Black Bears effectively ending West Virginia’s undefeated streak.  Making his professional debut in the game was the New York Yankees second round pick Nick Solak who was impressive in the field and went 1-for-4 at the plate with a walk.

Staten Island jumped out to an early lead in the game in the bottom of the first inning.  Ricardo Ferreira got started off with a double to center field before Nick Solak walked.  Jose Rosario then just narrowly missed a homerun that bounced off the left field wall, bringing home Ferreira and moving Solak to third for a double.  Drew Bridges then lined a single into right field to bring home Solak, moving Rosario to third.  With runners at the corners Dom Thompson-Williams grounded into a double play to bring home Jose.

West Virginia would touch Yankees starter Adonis Rosa for 1 run in the top of the third inning but Rosa pitched himself out of a bases load jam to hold the Black Bears to just 1 run.  After getting a quick ground out Adonis hit Tyler Leffler with a pitch, walked Albert Baur and then hit Will Craig.  Jordan George then singled home Leffler but a pop out to short and strike out got Rosa out of the jam and limited the damage to just 1 run.

The Black Bears responded in the top of the fifth inning with an additional run off of Adonis Rosa when with 1-out he gave up back-to-back doubles.  Rosa would finish the game after 5 innings, allowing 2 runs on 5 hits and 3 walks while striking out 5 batters.  He was followed by reliever Brooks Kriske who was touched for 2 runs in 1 2/3 innings on 2 hits.   Those 2 runs came in the top of the seventh inning.  Relieving Kriske was David Palladino who earned the win in 1 1/3 innings.  He struck out 3 batters, hitting as high as 97 MPH on the radar gun and allowed just 1 hit.

Staten Island took the lead for good in the game in the bottom half of the seventh.  Ricardo Ferreira singled to center, stole second and moved to third on a pass ball, putting him in position to score on Nick Solak’s first professional base hit.  Nick Solak then stole second and moved to third on a wild pitch before Jose Rosario walked.  After a pitching change Rosario stole second.  Drew Bridges then walked to bring up Dom Thompson-Williams who hit an RBI single to right field.  With the bases still loaded Timmy Robinson walked and Chris Godinez then hit a sacrifice fly to right field.

The Yankees added two more runs in the eighth inning.  Ricardo Ferreira walked but was erased after Nick Solak grounded into a force out at second.  Solak then went to third on a single by Jose Rosario.  Rosario then stole second base on a wild pitch that allowed Solak to score. The wild pitch also allowed Jose to move into third, putting him in position to score on a double by Drew Bridges.  The scoring ended there but with now 10 runs in the game Staten Island was firmly in the lead.

Eduardo Rivera took over on the mound for the Yankees in the ninth inning and pitched a shutout inning, allowing 2 hits and finishing the win.  Rivera hit as high as 95 MPH with his fastball.  At the plate several Yankees had good nights with Ricardo Ferreira, Jose Rosario, Drew Bridges, and Dom Thompson-Williams each having 2 hits apiece.  Nick Solak, Timmy Robinson and Dalton Blaser each had a hit.  Bridges had 2 RBIs in the game, while Solak and Rosario each scored 3 times.

On Friday night the Yankees look to take the series with Drew Finley scheduled to make the start and Josh Roeder to come in relief.