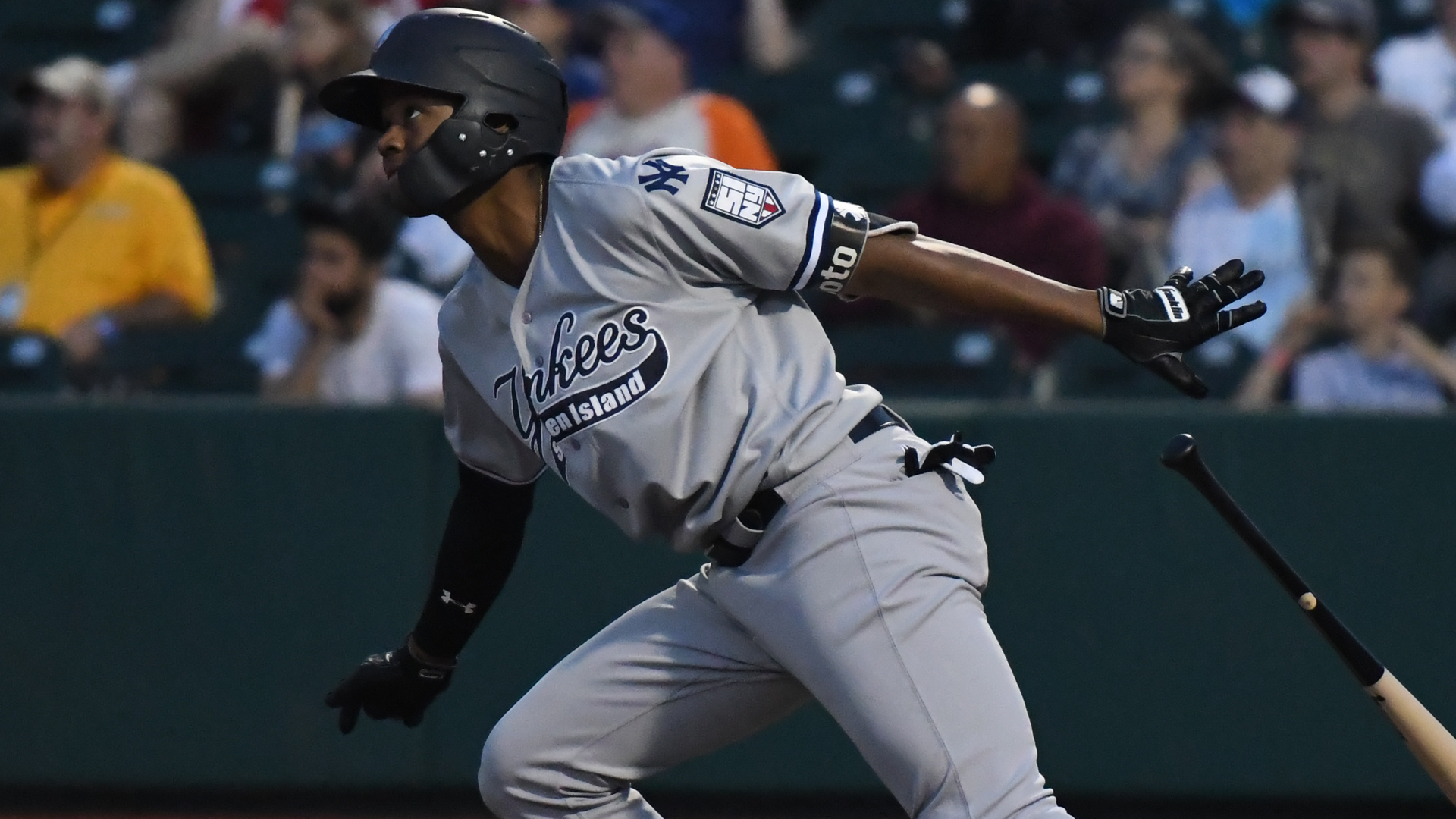 Outfielder Junior Soto collected the only base hit of the night for the Yankees. (Robert M. Pimpsner/Pinstriped Prospects)

As is tradition, the Staten Island Yankees and Brooklyn Cyclones are playing a home-and-home series to begin the season. Tonight, the Yanks visited their NYC rival, to open up the road part of their schedule. The crowd was indeed ready to go crazy, especially after the local mermaid parade.

Alex Mauricio got the start for the Staten Island Yankees. Mauricio let the first batter reach base on a cue shot down the third baseline. This runner would not be an issue, as the next batter grounded into a 6-4-3 Double Play. The inning then ended on a five-pitch strikeout. 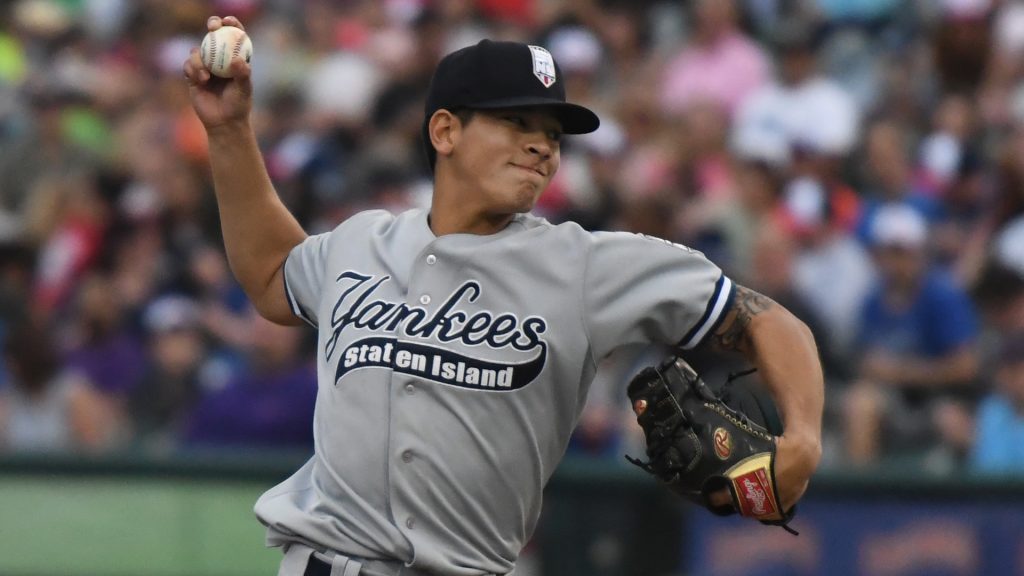 Alex Mauricio got the start for the Yankees but took the loss as they fell to the Cyclones. (Robert M. Pimpsner/Pinstriped Prospects)

Mauricio began the bottom of the second without too much issue, getting a strikeout and a flyout. He started to get in trouble, when Brooklyn first baseman Jose Brizuela, hit a double to the left-field corner, that left fielder Canaan Smith was not able to catch. The next batter brought in the first run of the game, on a single. The rally was short-lived, with the third out being a liner to second. Mauricio had only a 10-pitch inning in the first. The Cyclones hitters became more patient and raised Mauricio’s pitch-count to 35 after two innings. The Yankees were down at this point 1-0.

The Yankees were aggressive in the top of the third, trying to get that run back. In the 7-pitch inning, there were three very hard hit balls to right or right center.

“I thought we hit some balls hard,” said Yankees manager Lino Diaz, “and they were caught. But it was the same approach as always. We are aggressive. When we get our pitches, we are going to swing at it”.

Mauricio had a relatively uneventful bottom of the third, getting a 1-2-3 inning, on a groundout to short, and an unassisted put out by first baseman Eric Wagaman, and a fly ball to left field.

The Cyclones starting pitcher continued to control the Yankees offense, with another 1-2-3 inning. Through 4 innings, the Cyclones pitcher was at 39 pitches. 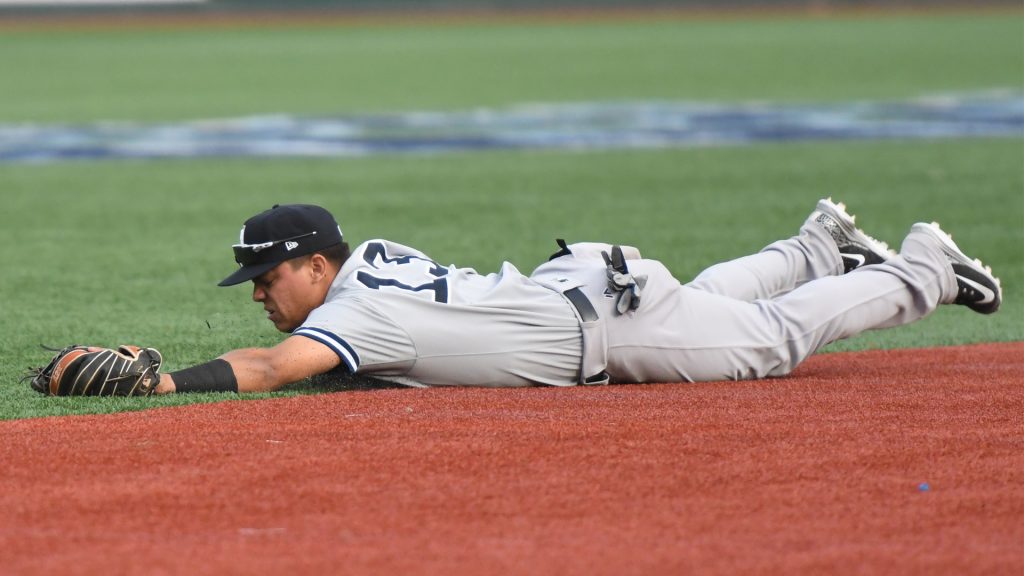 Mauricio pitched another 1-2-3 inning. However, it was not easy. After getting a groundout to short for the first out, it took 11 pitches to get the second out. There were a lot of inside fastballs that were fouled off, just to the foul side of the first baseman, Eric Wagaman. Another 7-pitch at-bat was needed to end the inning, a ground out to third. This was a 24-pitch 1-2-3 inning. Mauricio was not efficient this inning but got the job done.

The Yankees finally had a baserunner in the top of the 4th, after a lead-off walk by Junior Soto. To continue with the offensive trend of the game, Eric Wagaman popped out to center on the first pitch. The next batter wasn’t much better, as Andres Chaparro flew out to left. Catcher Ryan Lidge did get to a full count, before grounding out to the pitcher for the last out. The Brooklyn pitcher had not given up a hit at this point.

Alex Mauricio got in trouble early in the 4th inning, giving up a lead-off triple to the right-center field gap. He was able to get the next batter to strikeout looking, but then the wheels unraveled. The Cyclones would get consecutive singles, bringing in the second run. Mauricio left after 4.1 innings, giving up four runs (all earned), six hits, and four strikeouts. In his 87 pitches, 56 of them were for strikes. Mauricio attacked the zone, using his fastball that was around 95mph. There were some questionable calls that did not go his way, which led to some of his ineffectiveness. Reliever Drew Finley replaced Mauricio. 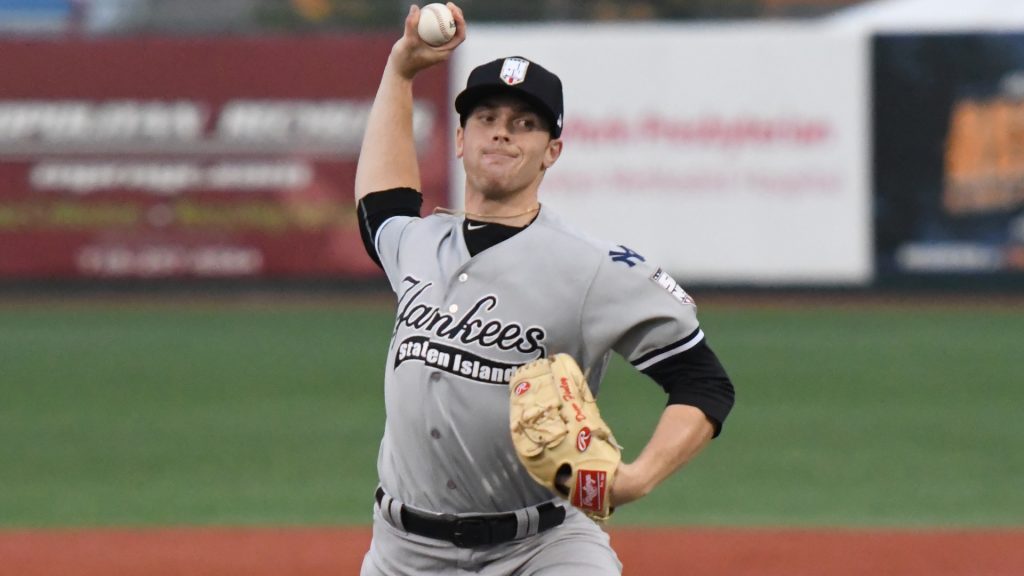 In Finley’s return to the Staten Island Yankees, he showed a bit of wildness, walking his first batter. Things only got worse when former Yankee prospect Kendall Coleman came to the plate. After reaching a 2-1 count, Coleman connected on a Grand Slam to Right Field, letting the two inherited runners score. Finley calmed down, getting the next two batters to fly out and ground out respectively. However, the damage was already done. The Yankees now trailed 6-0, still without registering a hit.

Frederick Cuevas led-off for the Yankees in the sixth, and provided some life with a walk. Unfortunately, the Brooklyn starter would only need four more pitches to get out of the inning, inducing a fly out to right, and a 6-4-3 double play. Through six innings, the Brooklyn pitcher did not allow a hit, matching what Matt Sauer did to Brooklyn the night before. The Cyclone pitcher was also extremely economical, only needing 65 pitches through six innings.

Drew Finley appeared to have calmed down, striking out the first batter of the sixth on three pitches. The ineffectiveness came back, after giving up a 1-out triple to the Cyclones third baseman. After striking out the next batter, Finley gave up an RBI single. Finley was then pulled from the game, pitching 1.1 innings, giving up three runs (all earned), three hits, and striking out 2. 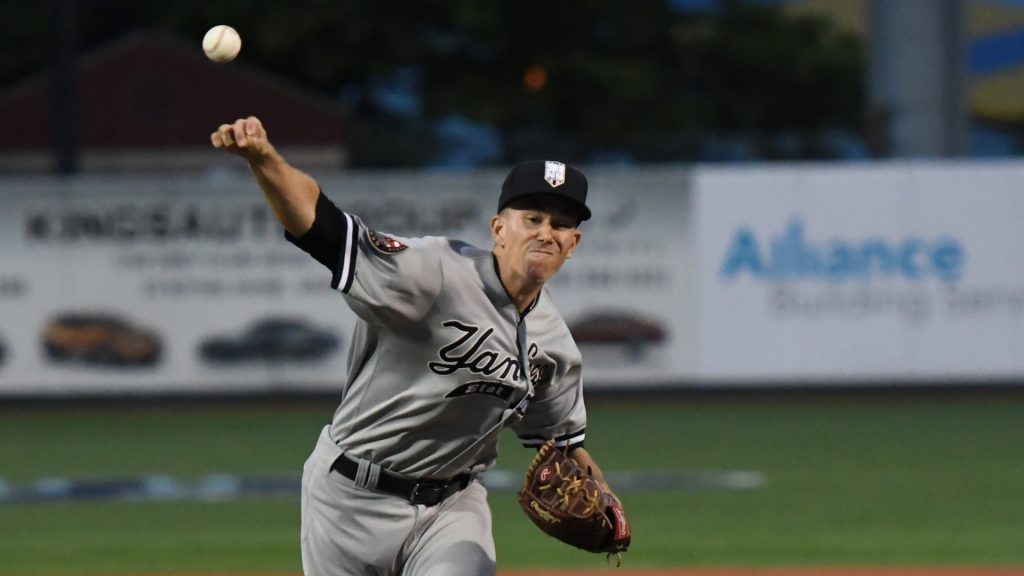 Christian Morris was the only Yankees pitcher not to give up a run. (Robert M. Pimpsner/Pinstriped Prospects)

Christian Morris relieved Drew Finley in the sixth, giving up a first-pitch single, then striking out the next batter to end the inning. Morris would pitch the seventh and eighth innings as well, halting the scoring for the rest of the night.

To the Yankees benefit, the Brooklyn starter Briam Campusano was taken out after six no-hit innings.

“It has been a long time. I haven’t seen that,” said Diaz about seeing opposing team starters go six hitless innings in consecutive games.  “But it’s a good thing,” he added, “It means that there is good competition on both sides.”

The no-hit bid was finally broken up in the top of the seventh inning. On a 1-1 count, Junior Soto hit a double to center field. Unfortunately, he was stranded at second after first baseman Eric Wagaman struck out swinging to end the seventh.

Christian Morris was hit hard in the eighth inning but didn’t crack. Giving up a lead-off double to left field, the Yankees Righty reliever got the next three batters. The third out was a screaming line drive to dead center that Junior Soto was able to catch up to before it went to the wall.

The Yankees did get another baserunner in the eighth inning after Andres Chaparro reached on an error. The rest of the night offensively was uneventful. To end the game, the Yankees only had one hit and four baserunners, over nine shutout innings. The Yankees will look to take the series from Brooklyn tomorrow afternoon.

Ricardo Ferreira was out of the lineup but remained on the field as the first base coach. He was replaced in right field by last night’s homerun hitter Fredrick Cuevas. Andy Diaz made his first appearance of the season, as tonight’s Designated Hitter.

Right-Handed Pitcher Paul Young was assigned to AA-Trenton prior to the game.

On opening night, the star of the game was starting pitching Matt Sauer, who threw six no-hit innings. In most cases, Cyclones Starter Briam Campusano would have been the star, as he no-hit the Staten Island Yankees tonight for six innings. However, there was some drama at the ballpark tonight. This was the first game that Kendall Coleman played against the Staten Island Yankees. It was also Coleman’s Grand Slam that broke the game open. This is why it is clear that Coleman is the star of the game.

The Designated Hitter for the Cyclones tonight was former Yankees prospect Kendall Coleman. He is now the first player to be on the roster for both the Staten Island Yankees and the Brooklyn Cyclones.

The Staten Island Yankees will finish off the three-game series with Brooklyn tomorrow, at Richmond County Bank Ballpark. Game time is at 1 pm, with gates opening an hour before first pitch.