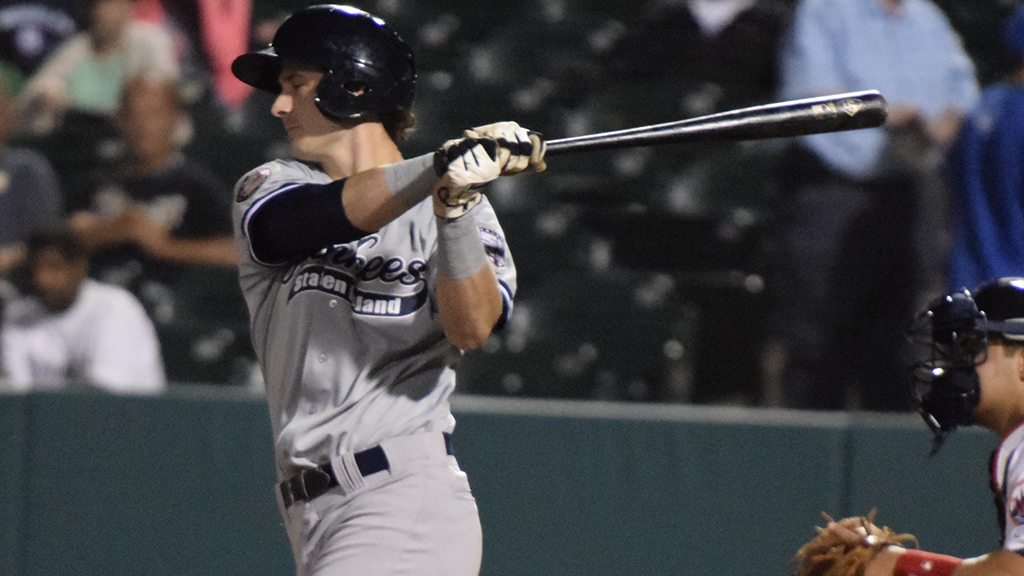 BROOKLYN, NY – The Staten Island Yankees maintained their half a game lead in the McNamara Division after defeating the rival Brooklyn Cyclones 7-3 at MCU Park in Brooklyn.  The Baby Bombers lead the division with a slim .5 game lead over the Aberdeen IronBirds and a 1.5 game lead over the Hudson Valley Renegades.

Staten Island started off the scoring in the top of the third inning.  Eduardo de Oleo lined a sharp double to left field to open the inning off then moved to third on a ground out by Kyle Holder to the second baseman.  Zack Zehner then earned the first RBI of the game with a soft line drive single to right field.  Jeff Hendrix placed a perfect bunt just in front of the plate that allowed him to reach first base and move Zehner over to second.  Ryan Krill flew out to right field, allowing Zack to go to third before Jeff Hendrix stole second base.  Kevin Cornelius then lined a single to center to bring home Zehner and Hendrix and give the Yankees a 3-0 lead.

Ethan Carnes earned his third win of the season after throwing 83 pitches over 5 innings of work.  He allowed 3 runs one 6 hits and 2 walks while striking out 3 batters.

Ryan Krill made an absolute amazing play in the in the bottom of the second inning diving at full extension into foul territory to catch a line drive by Pedro Perez and tagging the base to get out Hengelbert Rojas.

After Brooklyn tied the game in the bottom of the fourth Staten Island would come back to played another 3 runs in the top of the fourth inning.  Thairo Estrada walked and then moved to third on a double by Jhalan Jackson.  After a strike out by Eduardo de Oleo Kyle Holder walked to load the bases.  Zack Zehner then lined a single to left field to bring home Estrada and Jackson while moving Holder to third.  Jeff Hendrix was next at the plate and he struck out swinging while Holder and Zehner pull off a double steal with Zehner safe at second and Holder stealing home successfully.

In the top of the sixth the Yankees added one more run after Eduardo de Oleo tripled on a line drive to centerfield and then scored on a throwing error by the Cyclones shortstop trying to get him out at third.

Sunday afternoon the Staten Island Yankees will look to continue their winning ways as they send Kolton Mahoney to the mound.  If the Baby Bombers win and the Aberdeen IronBirds lose the Yankees will clinch the McNamara Division.