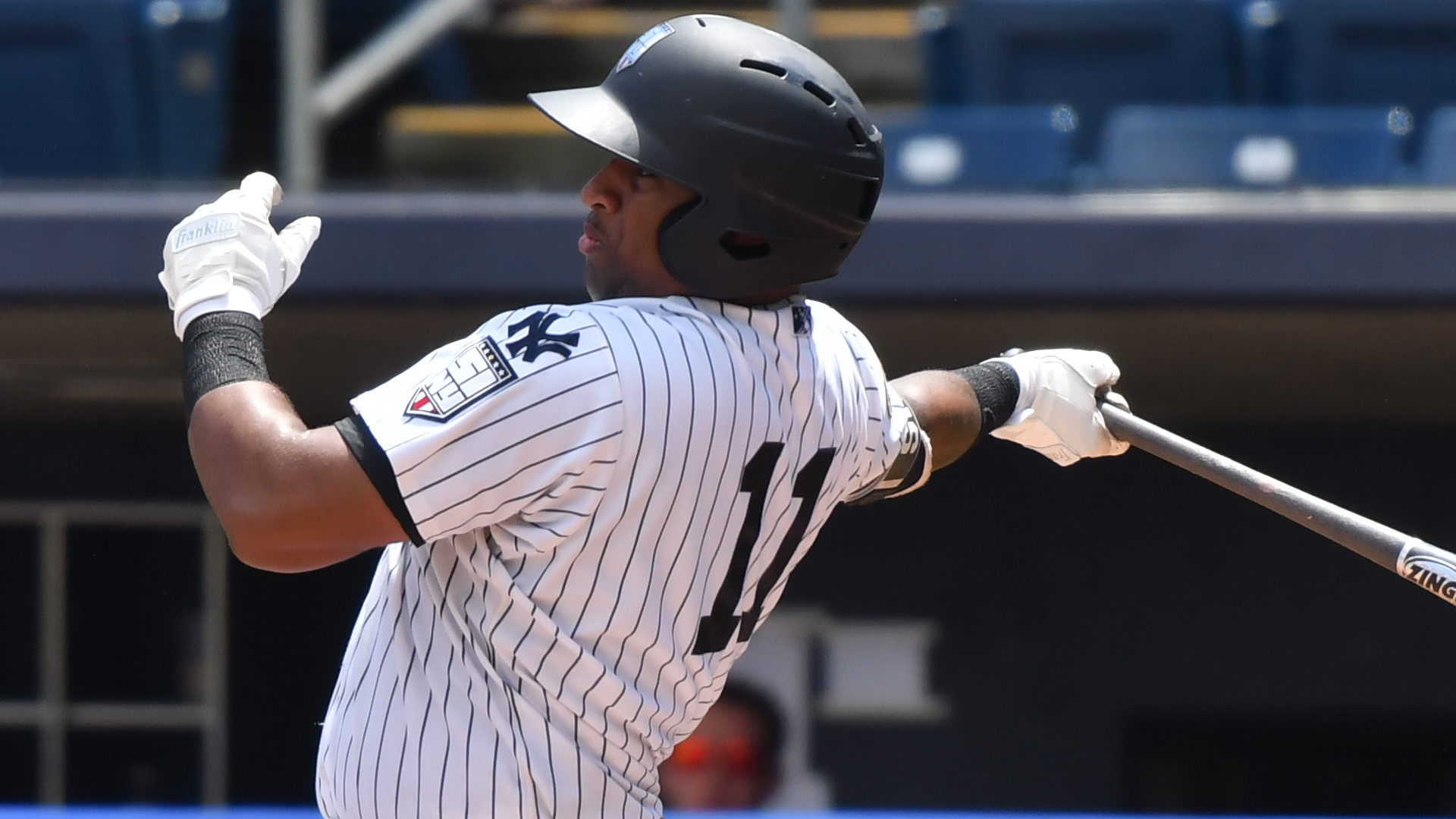 Canaan Smith watches as he hits his second home run of the year over the right-field fence. (Robert M. Pimpsner/Pinstriped Prospects)

After going 19-9 in the month of July, the Staten Island Yankees (24-20) started August on a good note as they avoided being swept by the Aberdeen Ironbirds (18-25) with an 8-3 win. They had a scoring surge in the second inning and Juan De Paula (1-1) went the longest he has had in any outing this year.

“I think they did a great job,” said manager Lino Diaz about the offense. Some at-bats I can recall were tremendous when [Canaan] Smith hit the home run and after when he got the single, they were very good at-bats. The other at-bat I can go back to is [Eduardo] Torrealba battling his butt off and he’s been battling a lot offensively. To me, those guys did a really good job.”

Andres Chaparro began the bottom of the second by drawing a walk. Three batters later, after a Miguel Flames single, Eduardo Torrealba got the Yankees on the board with a base hit to left center. Torrealba went 2-for-3 with a pair of RBIs (9,10).

Later in the inning, after Ricardo Ferreira drew his second walk in as many innings, Canaan Smith crushed a three-run home run over the wall in right to put Staten Island ahead 4-0. It was Smith’s second home run of the year.

The four runs would be all that De Paula would need as he did not allow a run in the first five innings. His fastball was around 92-93 miles-per-hour and topped out at 96 to go with his curveball.

Aberdeen would find a way to score against him in the top of the sixth. Willy Yahn would pick up a one-out double and later score on a Nick Horvath RBI single. After a double by Cody Roberts, Irving Ortega’s sacrifice fly cut the lead to 4-2. Then, Luke Ringhofer made it a one-run game with an RBI single.

That single would end De Paula’s afternoon. He went 5.2 innings, allowed three runs on eight hits, struck out five, and walked two on 93 pitches (59 strikes). Despite the rough sixth inning, there were positives to take from the right-hander’s start.

“It was outstanding, His effort was great today. He competed, he got in trouble a little bit. When he did, he kind of sat back. One of the things he’s working on is when things start going a little fast, he sits back, breathes, and gets back into the moment. He did a really good job at that today. I thought he gave us a great effort and did a really good job today,” said Diaz.

Brooks Kriske got the final out of the sixth via a groundout by Milton Ramos and he would end up finishing the game for Staten Island. In 3.1 innings of work, he allowed one hit and struck out a batter as he got his third save of the year. It is the most innings Kriske has pitched in any game of his professional career.

“He attacked. He threw strikes. He never backed down. He only had 38 pitches, which is great. He stayed composed. Once he got one out, he went back at it. To get three innings with a low pitch count, it was great.”

The Yankees would add two crucial insurance runs in the seventh and they would do it with some small-ball. Andy Diaz came in the ga,e to pinch-run for Flames after his one-out single. He would steal second and come around to score on an RBI double by Torrealba. Smith would extend the lead to 6-3 with a base hit to right for his fourth RBI of the day.

Kyle Gray would add to the lead in the eighth with a home run of his own. With Junior Soto on first (single) and two outs, the second baseman hit a two-run home run to right for his second of the season.

Gray Fenter ended up getting the loss for Aberdeen. He went three innings, gave up four runs on three hits, struck out six batters, and walked four.

Star Of The Game: Today’s star of the game goes to left fielder Canaan Smith. Smith had a ten-pitch at-bat in the first that led to a walk. He had the three-run home run in the second and then added a key insurance run with an RBI single in the seventh.

The four RBIs for Smith tie a season-high that he had on July 4 against the Hudson Valley Renegades. He came back on July 25 after being out since that 4th of July game due to a quadriceps injury. Diaz talked about how the outfielder showed good patience at the plate:

“What I liked today is he stayed within himself. He stayed composed, which is a great thing. He battled through his at-bat and he was able to have success. He found his pitch and he drove it. That’s a credit to him and a credit to the work he’s put in.”

Next Game: The Staten Island Yankees will begin a three-game series on Thursday night against the Connecticut Tigers. First pitch is at 7:05 p.m ET at Richmond County Bank Ballpark at St. George. Carson Lance (1-3, 4.97 ERA) will start for Connecticut against Rodney Hutchison (1-0, 1.64) for Staten Island.

Back on June 28-30, Staten Island was swept by Connecticut and lost all three games by one run. Since then, the Yankees have turned it around and are in the lead of the Wild Card standings:

“We had a tough series with them. I think right now our guys are competing good. We are going to give them a good series this time around,” said Diaz.