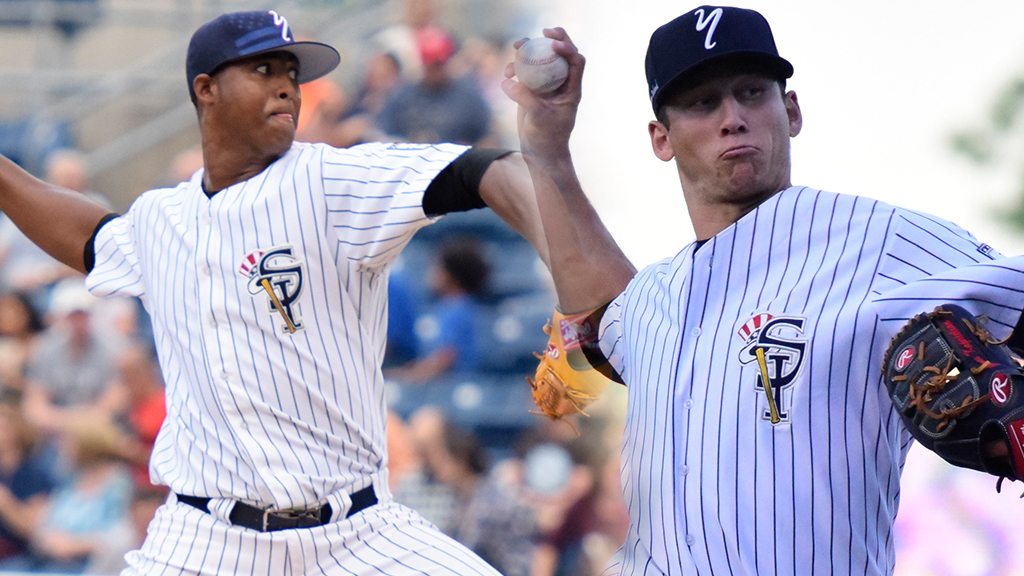 For the tenth time in team history the Staten Island Yankees will be playing post season baseball as on Monday they clinched their 8th McNamara Division title.  This Wednesday night the Baby Bombers open the NY-Penn League playoffs as they face off against the Tri-City Valley Cats in game one of the semi-finals.  The Yankees are heading into the playoffs with a 4-game winning streak that started with a victory over the Valley Cats in their final regular series meeting.

Getting the start for the Baby Bombers on Wednesday night will be 2015 New York Yankees top draft pick James Kaprielian.  Kaprielian was 0-1 with a 2.00 ERA for Staten Island across 3 starts, pitching 9 innings and striking out 12 batters.  His last start came on September 3 when he threw 3 2/3 shutout innings against the Valley Cats, allowing 2 hits and throwing a total of 64 pitches.  During that start, he topped out at 94 MPH with his fastball, but at times this season he has hit 96 MPH.

In game two of the series the Yankees and Valley Cats will head north to Troy, NY where Domingo Acevedo will get the start for Staten Island.  Acevedo has been one of the most impressive prospects on the team with a fastball that routinely goes into the triple digits once or twice per start.  At one point Domingo hit 103 MPH with his fastball.  He owns a 3-0 record with a 1.81 ERA across 12 starts, throwing 49 2/3 innings and striking out 54 batters.  Last time out Acevedo threw 6 shutout innings allowing just 2 hits to the Valley Cats enroute to his third win of the season.

If the series goes three games Luis Cedeno will get the start for the Staten Island Yankees.  Cedeno has a 5-3 record this season with a 2.73 ERA, throwing 66 innings and striking out 51 batters.  He has been one of the most consistent pitchers in the rotation for the Baby Bombers mixing a low-90s fastball with solid off speed pitches.  In his last time out he threw 5 2/3 innings allowing 4 runs, 1 earned, on 7 hits and striking out 7 batters.

If need be the Yankees will have starters Ethan Carnes, Derek Callahan and Kolton Mahoney available in the bullpen.  Mahoney has thrown back-to-back 7 inning starts to end the season, the first Staten Island pitcher to throw 7 innings since 2012.  But with lights out relievers Michael Schaub and Jonny Drozd they likely won’t need to tap into the extra depth.

At the plate the Baby Bombers will be led by Trey Amburgey in right field.  Amburgey hit .367 with 6 doubles, 2 triples and 5 homeruns in 21 games since being promoted.  He stole 7 bases this season and played mostly right field.  Regular right fielder Jhalan Jackson is battling a hamstring injury and is day-to-day.

Designated hitter Junior Valera hit .305 for the Yankees with 57 hits in 187 at bats over 51 games.  Valera has 7 triples, 13 doubles and 32 RBIs for Staten Island and possess excellent speed on the bases.  Third baseman Kevin Cornelius hit .304 this season and is one of the best defensive players on the team.

Defensively the Staten Island Yankees will have one of the better teams with first round pick Kyle Holder at short, Thairo Estrada at second, Jeff Hendrix in center, and Zack Zehner in left.  Holder has been hitting well to end the season, hitting over .300 in his last 13 games but easily one of the best defensive shortstops in the league.