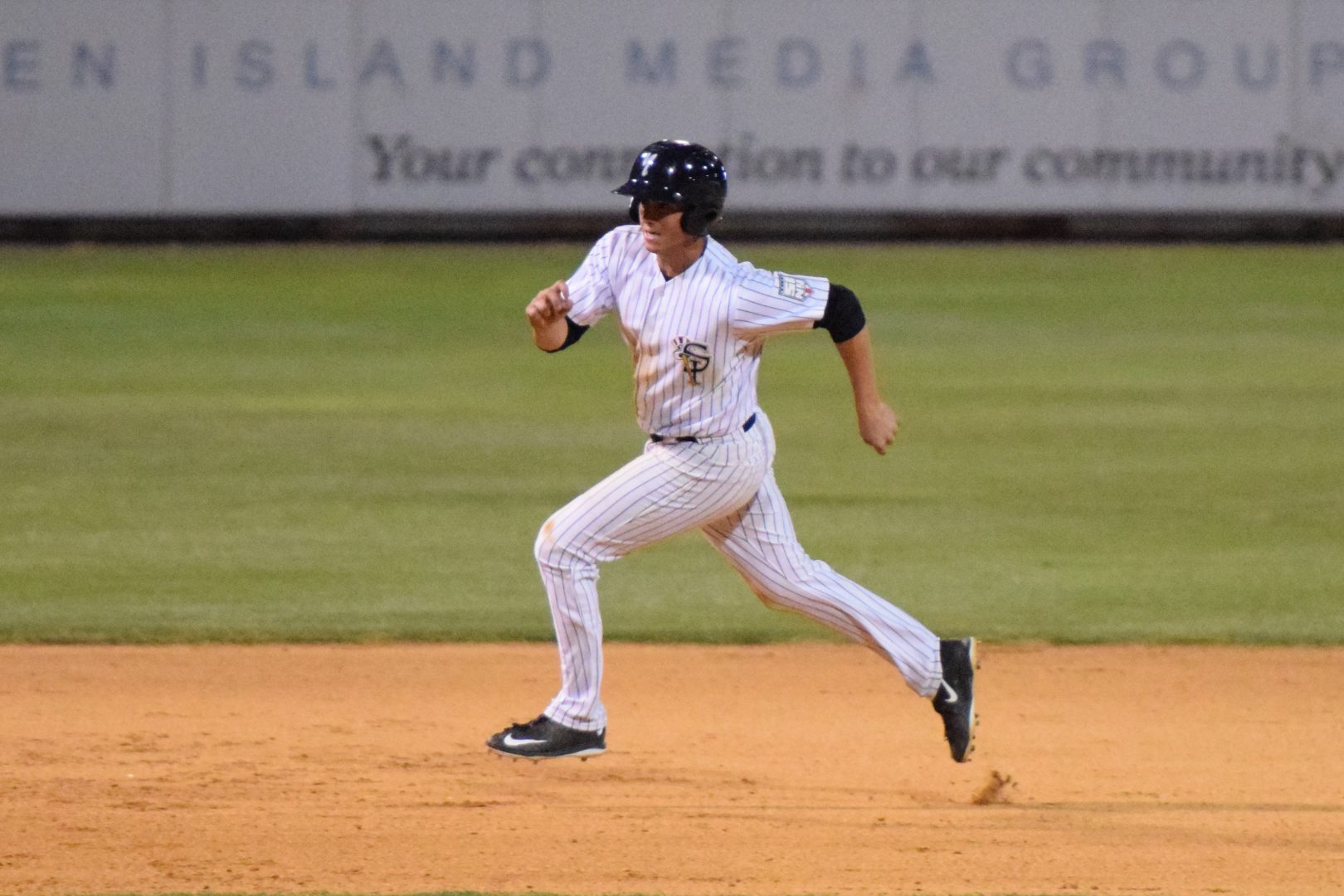 Mandy Alvarez running to third base in the sixth inning in a game for the Staten Island Yankees. (Robert M. Pimpsner)

At 5:00pm on Saturday night, the Staten Island Yankees and Vermont Lake Monsters resumed a game that had been suspended the night before.  At 12:55am on Sunday morning those two teams completed the second game of the scheduled doubleheader.  Almost 8 full hours of minor league baseball.

Anyelo Gomez originally started the game, going 1 inning before the rain caused the suspension on Friday night.  On Saturday he was replaced by Kolton Mahoney, who earned the win pitching 6 innings, allowing 1 run on 4 hits and 2 walks while striking out 10 batters, a career high.  In the eighth inning, Taylor Widener came in, earning the save with 2 shutout innings allowing a walk and striking out 3 batters.

Luis Torrens was the original catcher, starting the game on Friday night but when they resumed play he was replaced by Radley Haddad.  The reason why is Torrens was at the hospital to get checked out after being hit the night before.  But after a few innings gone by he returned and was cleared to play.

In the second game, Austin DeCarr got the start, making his second of the season.  DeCarr is currently rehabbing as he returns from Tommy John surgery that cost him all of 2015.  He was touched for 4 runs on 5 hits and 3 walks over 3 2/3 innings, he also struck out 4 batters.

David Sosebee was next and he threw 1 1/3 innings of shutout baseball before Claudio Custodio came in.  Custodio was touched for 2 runs on 3 hits and 2 walks before being lifted for David Palladino.  Palladino pitched 5 innings out of the bullpen, allowing 1 run on 1 hit and 1 walk and striking out 6 batters, hitting as high as 95 MPH on the radar gun.

Mandy Alvarez had a game, going 5-for-8 with 2 runs scored and an RBI, he accounted for half of Staten Island’s total hits in the game.  Luis Torrens had 2 hits before being lifted for a pinch runner.  The second game went a total of 4 hours and 54 minutes, ending just before the NY-Penn League curfew of 1:00am.

On Sunday these two teams meet up again in the rubber game of the series.  Freicer Perez is the scheduled starter for the Yankees, he will be making his third start of the season.