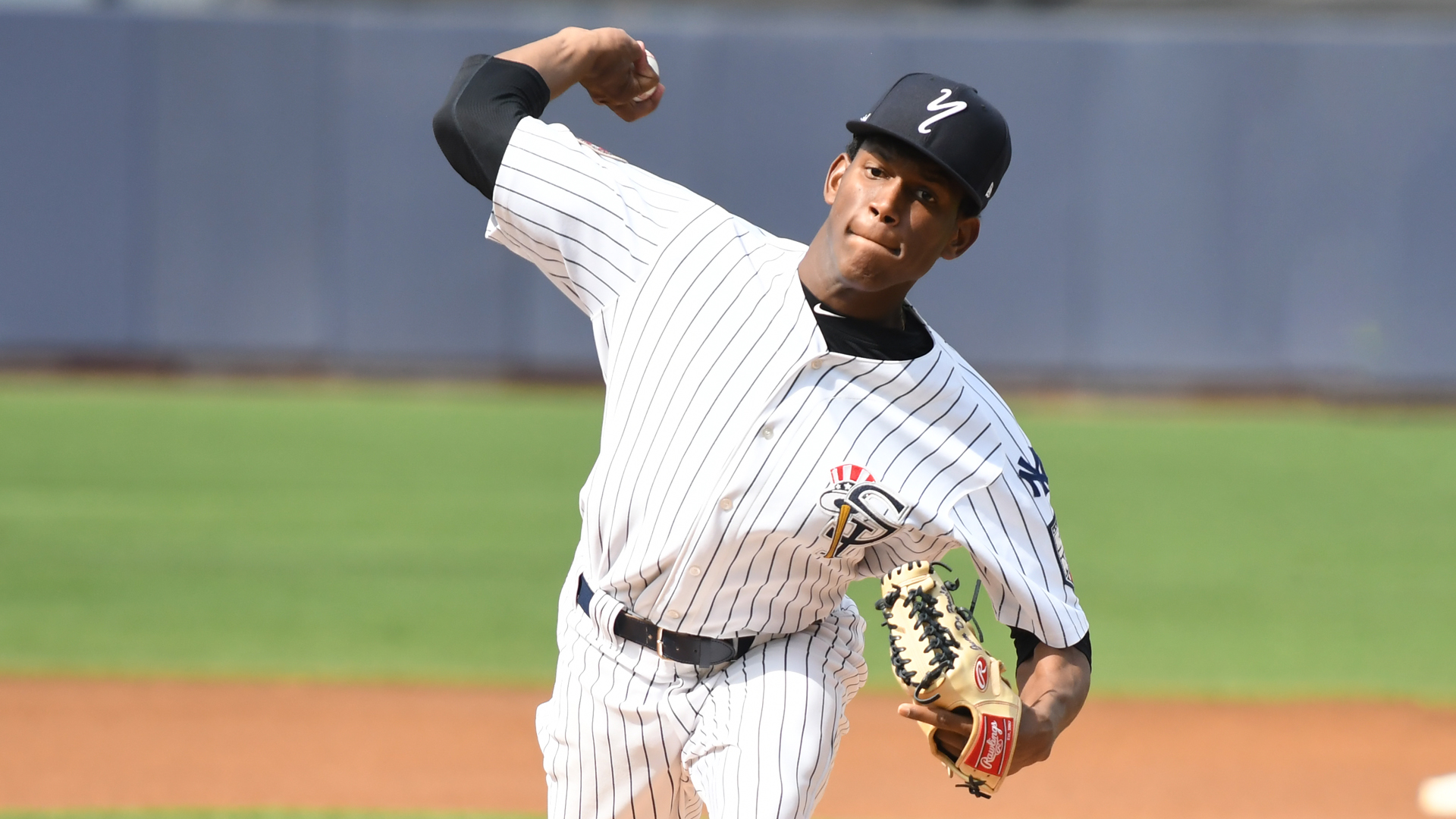 For six innings, it appeared that the main story for the Staten Island Yankees (3-7) was going to be the dominance of Roansy Contreras on the mound as he left after six innings with a 2-0 lead. However, the bullpen was unable to keep the Tri-City Valleycats (6-4) off the scoreboard. Tri-City scored three runs in the seventh and two runs in the eighth in route to a 5-2 win.

In the early portion of the season, the Staten Island bullpen has been a strength for the team, but it was not on Sunday afternoon as Abel Duarte (0-1), and Daniel Alvarez combined to give up all five runs.

“It’s one of those things that happen. It’s frustrating, and it’s a tough loss no doubt about it,” replied Staten Island Yankees manager Lino Diaz.

As for Contreras, he was dominant on the mound with a fastball that was around 92-94 miles per hour to go with his curveball and changeup. He went six innings, gave up no runs on two hits, struck out ten batters (four swinging), and walked one on 85 pitches (52 strikes) in the no-decision.

“He was incredible. His fastball was good. His curveball was good. You know that it is good when the players from the other team come up to you and say oh my god, he’s nasty. Yeah, he had a good night. He commanded his pitches and he did an excellent job,” said Diaz.

The one inning where Contreras ran into a little bit of trouble was in the top of the third. After hitting Ricardo Rodriguez with a pitch and walking Seth Beer with one out, he got Emmanuel Valdez into a 3-6-3 double play. That turned what appeared to be a long inning into a 17-pitch inning (most in any inning in this game).  He gave up one hit after that point.

“He’s got the ability to do that at anytime with the quality of his stuff. To execute some pitches right there, he had the hitters off balance and to get that double play, it was a big momentum swing for him”, replied pitching coach Travis Phelps.

Staten Island gave him some run support in the bottom of the fifth. After not having a hit in the first four innings, first baseman Eric Wagaman hit a solo home run to right to give the Yankees a 1-0 lead. It was his first home run of the season and something that Diaz hopes will jump-start his season.

“I think it was huge especially going the other way when he’s been out front a lot. He hit a fastball middle away well. It was a good thing for him, and hopefully, it gives him a jumpstart.”

Later in the inning, the Yankees mounted a two-out rally as they picked up their second run. Alex Junior drew a walk (sixth this season) and Jesus Bastidas singled to center. That set the stage for Kyle Gray.

After Gray flew out with bases loaded in the third, he picked up his first professional RBI on a base hit to right. However, he was thrown out at second to end the inning.  He’s had good at-bats to start the year, and he finally got a result from it.

“I like his approach. I like the way he goes about his business, and we expect a lot of good things from him.”

Once Contreras’ day was done, Duarte made his Staten Island debut in the seventh, and he left without recording an out. An error by Andres Chaparro and Gilberto Celestino being hit by a pitch started the inning. Then, Juan Pineda tied the game with a two-run double down the left field line.

After a single by Carlos Machado, the Yankees went to the bullpen and brought in Alvarez. While Alvarez minimized the damage, a double play by Alex Holderbach allowed Tri-City to take a 3-2 lead.

Alvarez’s struggles would continue in the eighth when Seth Beer led off the inning with a solo shot to right, his fourth of the year and third in the last two games. The Valleycats would later add an insurance run on a sacrifice fly by Celestino. The right-hander went three innings, allowed two runs on three hits, and struck out two.

The Yankees had a chance to come back in the bottom of the ninth. Ryan Lidge and Junior drew walks, and those were sandwiched by a Frederick Cuevas single (all with two outs). But, Bastidas struck out looking to end the game.

They were 1-for-7 as a team with runners in scoring position despite putting good two-out rallies together. Diaz mentioned that a key for this team going forward is to square up the fastball when it comes to the hitters:

“We missed that fastball. You miss that fastball a couple of times and now you are behind in the count getting those breaking balls. When you get the fastball, you have to be able to square it and that’s what we need to get better at. Once we square it, we will start doing some damage.”

The star of today’s game has to be Staten Island starter, Roansy Contreras. He reached a career-high in innings pitched (6) and strikeouts (10). With 17 strikeouts in two starts to begin the season, the 18-year-old right-hander is off to a good start in the New-York Penn League. Plus, he never threw more than 17 pitches in an innings, so his efficiency was key to a quality start.

The sixth inning was not easy for Contreras when you consider he had never pitched that far in a game before. However, he only allowed the one hit (single by Beer).

“He was pretty strong until the sixth. When he went out for the inning, the stuff was creeping up in the zone and flattening out. But, he did a fantastic job battling and getting through it pretty easily.”

The Staten Island Yankees will be back in action tomorrow night when they host Tri-City at the Richmond County Bank Ballpark at St. George. First pitch is set for 7:05 p.m ET. Juan De Paula (0-0, 1.93 ERA) is scheduled to start for Staten Island.