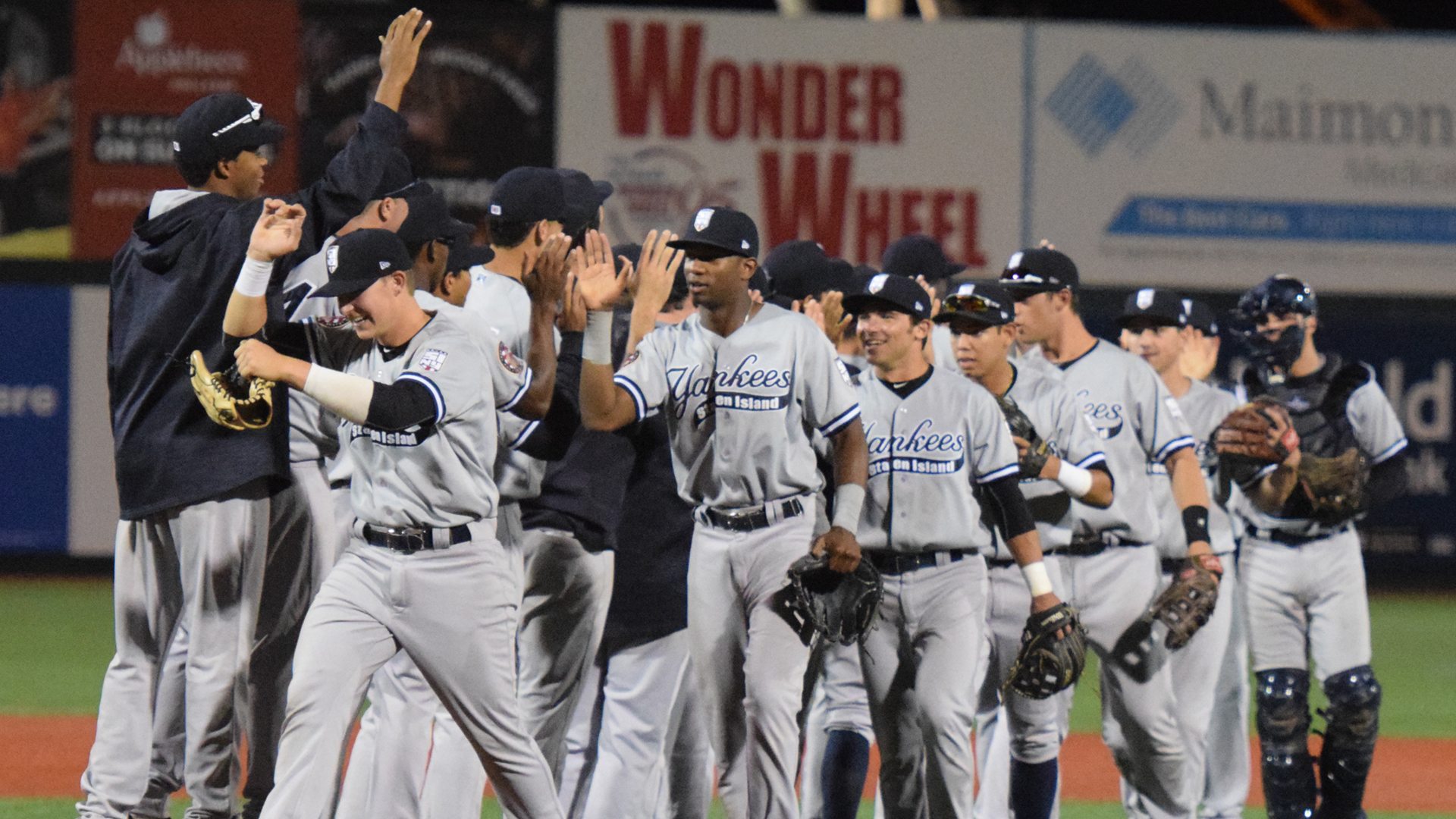 The Staten Island Yankees celebrate on the field after their win over the Cyclones. (Robert M. Pimpsner)

The Staten Island Yankees and Brooklyn Cyclones began their first game of the 2016 season on June 17, 2016 and then ended it on June 18, 2016.  After 5 hours and 39 minutes and 20 innings of baseball, the Yankees were victorious.

Adonis Rosa got the start for the Baby Bombers, the 21-year old out of Santiago, Dominican Republic was making his first appearance in Class-A.  He pitched six strong innings for Staten Island, allowing 2 runs on 3 hits.  He struck out 6 batters and did not walk any.

The win is the Yankees seventh consecutive victory over the Cyclones at MCU Park, their last loss at the Ballpark in Coney Island was on August 31, 2014.  It is also just the third time in franchise history that they won their first game in the season, the other two times were also against Brooklyn in 2006 and 2013.

The first run of the ballgame came in the first inning when Emmanuel Zabala homered on a big fly ball to left field.  The score remained 1-0 until the top of the fourth inning when Kane Sweeney singled and scored on a double to left by Mandy Alvarez.  Alvarez then moved to third on a single by Dalton Blaser before a sacrifice fly to right field by Kendall Coleman brought him home, giving Staten Island a 2-1 lead.

Brooklyn plated the tying run in the bottom of the fourth with 2 outs thanks to a double by Brandon Brosher and a triple by Darryl Knight.  That is where the score would remain until the top of the 20th inning.

David Sosebee took over on the mound for the Yankees in the seventh inning, allowing 1 hit and 3 walks in 1 2/3 innings before Justin Kamplain took over in the eighth.  Kamplain went on to strike out 4  in 2 1/3 innings, giving way for Michael Schaub.  Schaub had a strong game in long relief, striking out 3 batters while allowing just 1 walk and 1 hit in 4 shutout innings of work.

Eduardo Rivera took over in the bottom of the fifteenth inning.  After 3 innings, 2 walks, 2 strikes out and a hit he was done.  Claudio Custodio, the former infielder, then took over in the bottom of the 18th inning.  Custodio earned the win after striking out 3 batters and allowing a hit over 3 shutout innings.  The pitching staff combined for 19 strikeouts in the game, a new Staten Island Yankees record.

At the plated the Baby Bombers were led by Dalton Blaser who went 4-for-6 with 2 walks.  Manny Alvarez went 3-for-8 with a double, RBI, walk and a run scored while Luis Torrens went 2-for-5.  Ricardo Ferreira, Chris Godinez, Kane Sweeney and Danienger Perez each had 1 hit.

The Yankees lineup combined for 22 strikeouts, which is also a new franchise record.

Saturday night these two teams will meet up once again to conclude this 2-game home-and-home series with Brooklyn.  Right-handed pitcher Drew Finley will get the start.