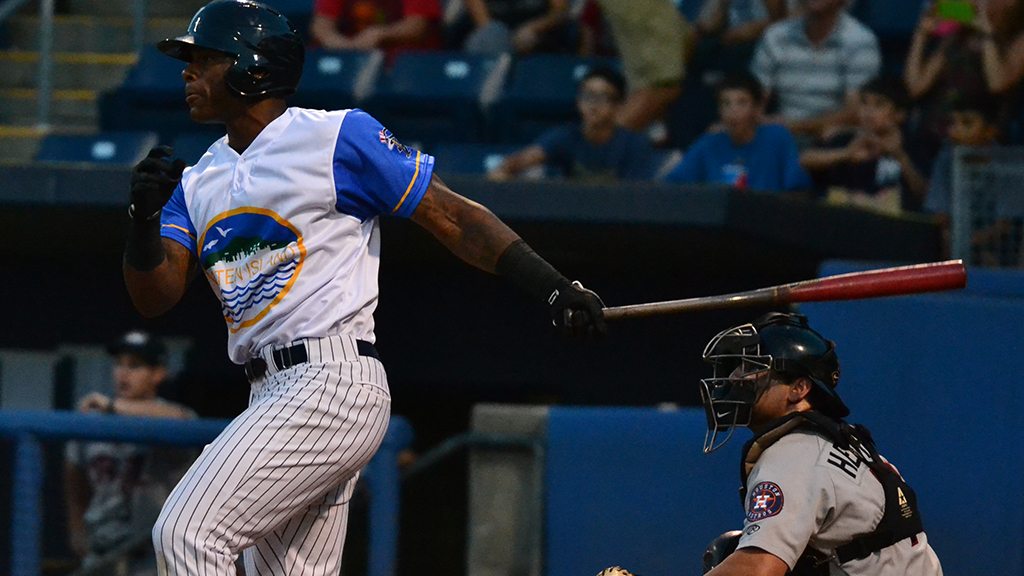 Jhalan Jackson was 2-for-4 with 5 RBIs in the game. (Robert M Pimpsner)

STATEN ISLAND, NY – The Staten Island Yankees maintain their slim lead over the Aberdeen IronBirds and Hudson Valley Renegades after a victory on Fan Appreciation Night.  The Baby Bombers wore special jerseys modeled after the borough flag as the team played their last home game of the regular season.

The Staten Island Yankees struck first, plating 2 runs in the bottom of the second inning.  Kevin Cornelius singled to center and then scored on a triple by Junior Valera.  Valera collided with the Tri-City third baseman, getting hit in the head but stayed in the game.  Jhalan Jackson then lined a single to center to bring home Valera and give Staten Island the 2-0 lead.

Luis Cedeno earned the win as he pitched 5 2/3 innings, allowing 4 runs, 1 earned, on 8 hits and walk while striking out 7 of the 25 batters he faced.  Cedeno threw 91 pitches, 63 for strikes and was consistency in the low-90s throughout the ballgame.

Michael Schaub came into the game in relief of Cedeno in the sixth inning going 2 1/3 innings allowing 3 hits and striking out 2.

Staten Island added some needed insurance in the bottom of the eighth inning.  Kevin Cornelius started it off with a ground ball single to center then moved to second on a sacrifice bunt by Thairo Estrada.  After a Jeff Hendrix came in as a pinch runner the Valley Cats would intentionally walk Junior Valera to pitch to Jhalan Jackson.  Jackson then sent a fly ball to left field for a 2-RBI triple.  Ryan Krill then hit a shot that went by the Valley Cats first baseman, causing him to lose his glove, to bring home Jackson and added another run.

Alex Bisacca came into the game to pitch the ninth but struggled.  He only threw 1/3 of an inning before being lifted for Jonny Drozd after allowing the bases to be loaded with 1 out.  Drozd then was lifted after allowing all 3 inherited runners score after 1/3 of an inning.  Travis Hissong took over on the mound and struck out the only batter he faced to earn the save.

Saturday night the Staten Island Yankees will travel over the bridge to take on the Brooklyn Cyclones in the final series of the season.  Left-handed pitcher Ethan Carnes will get the start for Staten Island.

Jhalan Jackson was 2-for-4 with 5 RBIs in the game. (Robert M Pimpsner)