Slade Heathcott Ready to Make His Mark in 2015

Slade Heathcott with the Trenton Thunder in 2014 (Rand Greenblatt)

Slade Heathcott has endured a challenging start to his professional baseball career. A vast list of injuries has derailed his journey to the Major Leagues since being selected by the New York Yankees in the first round of the 2009 draft, and it came to a head last season when he appeared in just nine games for the Double-A Trenton Thunder due to season-ending knee surgery.

But now, in what he says is the baseball shape of his life, he’s ready to make his impact felt and his presence known.

“I have a saying that we cannot truly enjoy the summit unless we have looked up from the valley below. I believe that I have been through all this so that I can truly grasp and soak up the magnificence of playing in the big leagues.”

His recovery process this offseason was an unpleasant adventure that could have thwarted his big-league dreams. He credits a friend with helping him shift his focus and enter Spring Training at his peak.

The 24-year-old outfielder’s return to the diamond has been positive thus far in Spring Training. In 12 at-bats, he’s hitting .500 with one home run and four runs batted in for the Yankees. Adding three walks and two stolen bases, he boasts a team-high .600 on-base percentage. Though the sample size is small, it’s proof of what he could be capable of with more time.

The key for the left-handed Heathcott is staying healthy. His intense playing style has led to several injuries that have hampered his development and progress toward reaching the Major Leagues.

Still, what he has been able to show in three full seasons in the minors is a promising sign for the Texarkana, Texas native. In 444 plate appearance for the Double-A Trenton Thunder during the 2013 season, he hit .261/.327/.411 with 22 doubles, seven triples, eight home runs and 49 runs batted in.

“He was getting better at pitch selection when he got hurt in 2013,” former Thunder manager Tony Franklin told Pinstriped Prospects’ own Jed Weisberger in early March. “Like everyone, I’m really anxious to see what Slade does this season. If he can stay healthy, he has quite a package of talent.”

Heathcott will need to improve upon his plate discipline this coming season, as evidenced by his 107 strikeouts in 2013. But as Franklin pointed out, he had already made great improvements in his pitch selection at Trenton, and it showed in his production.

An avid fan of Louie Giglio’s sermons, faith has steered Heathcott’s path in life, both on and off the field. His relationship with Jesus Christ has provided him the strength to overcome early struggles with alcoholism and has guided him through the trials and tribulations he has faced throughout his baseball career.

“With all my injuries and especially this last one it finally sank in that this life and game is about a lot more than me,” Heathcott said. “I know God has a purpose for me, and I might not know what that is right now, but I do and will always know that if I work hard, respect everyone, and trust in His plan, He will handle the rest.”

With an important season ahead for Heathcott, he has already had a busy 2015. He re-signed a minor league deal with the Yankees on Jan. 5 and welcomed his first-born child to the world with wife Jessica shortly thereafter—an experience he says is the “most amazing feeling in the world.”

At this point, a successful campaign may be just another walk in the park for him. He would love nothing more than to make the Yankees proud of their decision to re-sign him this winter.

“I believe everything works out for the best in everyone’s interest every time,” he said. “I wanted to make it with the team that gave me a chance. I want to prove that those guys like Damon Oppenheimer were not wrong in drafting me. I am thankful for that opportunity this year.”

Heathcott will get his chance to do exactly that, likely with the Triple-A Scranton/Wilkes-Barre RailRiders as part of an outfield that could include fellow top prospects Mason Williams and Tyler Austin. 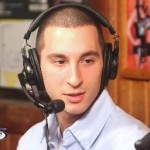