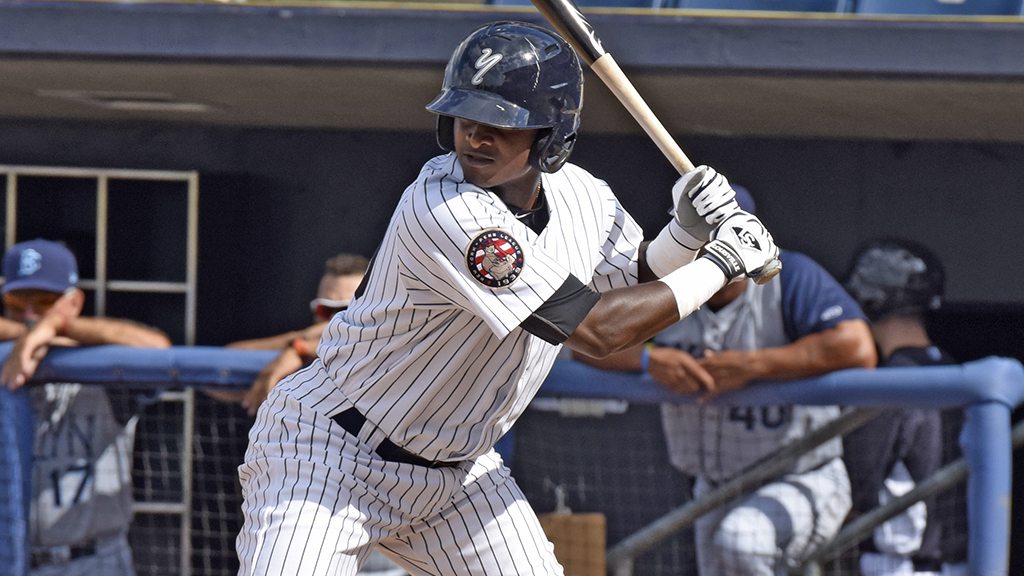 ABERDEEN, MD-It’s not exactly a “Midsummer” Classic, but still a pretty big honor for the up and coming players of the New York-Penn League.

One of the oldest professional baseball leagues in the nation celebrated its All-Star festivities on Tuesday night at Ripken Stadium in Aberdeen, Maryland, home of the Aberdeen IronBirds. Four members of the game’s South squad members donned pinstripes for the game, as the Staten Island Yankees were represented by four of their best players. CF Junior Valera (.320, 26 RBIs, 8 SBs) and SS Thairo Estrada (.311, 2 HR, 21 RBIs) each took the field, whole P Luis Cedeno (4-3, 2.92 ERA) pitched a scoreless inning. OF Jhalan Jackson (.264, 5 HR, 30 RBIs) was selected but did not play due to injury, but was in town to represent the team.

“It’s an awesome experience,” said Valera through translator and fellow South All-Star Daniel Arribas of West Virginia. “I’ve always wanted to play in an All-Star Game. I had a great time spending time with the best in the league from other teams.”

South squad manager Luis Pujols, whose IronBirds face off against Staten Island in a three game set that debuts with a doubleheader on Wednesday night (the first game of which will complete a suspended game from July 10), praised the Staten Island quartet after the contest.

“I hope they don’t play as well tomorrow,” the former Houston Astro said with a laugh. “But seriously, I really like those players. They have some real talent there in Staten Island.”

Though Jackson had to be to left out of the lineup, Valera was one of Pujols’s starting nine. He played five innings in centerfield, going 0-for-1 with a strikeout before being relieved for Williamsport’s Mark Laird.

Estrada would come off the bench to take over the shortstop role from hometown hero Ricardo Andujar. Estrada’s first at-bat likewise ended with a swinging strikeout, but he made solid contact on his second trip to the plate, with an athletic snag from Lowell 1B Josh Ockimey being the one thing that took away a hit. Estrada also impressed in the field, earning a putout on a fielder’s choice and later making a nice throwing out to nab the speedy Connecticut C Will Allen to end the top of the 7th inning.

“I had some great communication with the third baseman (Arribas),” said Estrada, speaking through the aforementioned prospect from the Pirates system. “I charged it hard, got a good jump on it and let my body take over from there.

Pitchers in the game were limited by the game’s unusual procedures, including a stipulation that they could only throw 25 pitches in the lone inning they were allowed to pitch (another quirk ended the game after 8.5 innings despite the “visiting” North squad owning a 4-2 lead, a lead they would keep to earn the win). This condition was meaningless to Staten Island thrower Luis Cedeno, who got through the 4th inning in just 16 pitches. In those 16, Cedeno allowed one hit, and also struck out the first batter he faced, Tri-City 3B Bobby Wernes.

“I was really nervous during the first at-bat,” said Cedeno, again through Arribas. “But the fastball began to work for me and once I got through it was pretty fun. I’m looking forward to going into the second half.”

Finally, Jackson did not play in the game, but was on hand to support his teammates and rep the pinstripes in Maryland. Jackson is on the 7 day disabled list, and is slated to return next week.

“I’m feeling all right,” said Jackson. “It feels to good to have people watching me and seeing what I’m doing. It’s an honor and a blessing.”

Pujols even jokingly expressed disappointment in that fact he was unable to use Jackson, who he planned to stick in the cleanup spot of the starting lineup.

“One of the guys I really wanted to use (in the lineup), was Jackson,” said Pujols. “I think the last time he was here he broke our scoreboard!”

With the All-Star celebrations now in the rearview mirror, the focus now returns the NYPL regular season, which begins with the Yankees in a bit of hole. Making up a game with the IronBirds that was postponed due to weather, they’ll start the top of the 5th down 2-1 to a team a mere game and a half behind them for McNamara division lead. However, the quartet of Staten Island’s finest are ready to accept the challenge and go into the final weeks of the regular season and face down their foes head-on.

“It’s awesome to have an opportunity like this,” said Valera. “But it’s a long season and you have to forget what you did the day before. Tomorrow is a new day, we have to show up and we have to prove ourselves every single day.”