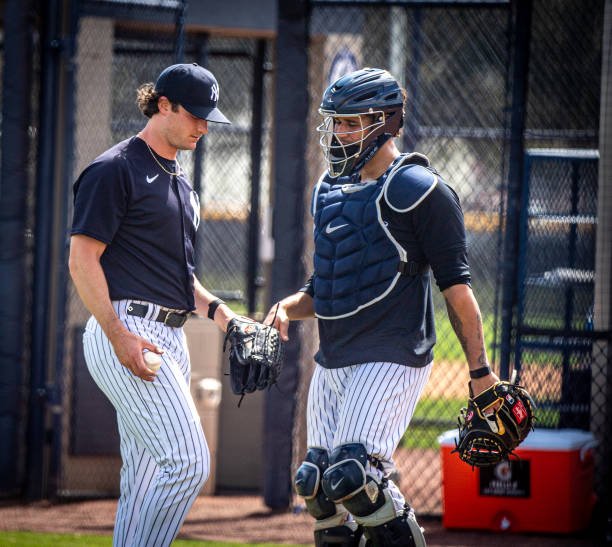 In his first start of the spring, Gerrit Cole shook off some rust to have a strong first inning of work. He allowed three singles, a walk, and one run, but struck out Jake Rogers on a good slider to leave the bases loaded. Cole got up to 99 MPH in his debut and got five swings-and-misses. Three of them were on his fastball, one on his slider, and one on his knuckle curve. While he had to labor through a bit with 28 pitches, he still executed his pitches well with 15 of those pitches going for strikes. Cole spoke to Meredith Marokovits in the third inning about his outing.

“Feeling good, I hit the pitch count because I couldn’t throw enough good pitches,” Cole said when asked what he takes away from his first outing of the spring. “I thought we shaped some good breaking balls and executed some good pitches. So today was a good day.”

Cole will continue to see an uptick in his pitch count as the spring moves forward. Yankees fans should be excited being able to see their ace pitcher for a full season.

To start off what will be one of the feel-good stories of the 2021 season, Jameson Taillon pitched in a game for the first time since 2019 with the Pittsburgh Pirates. Taillon has been through the wringer over the last several seasons. He is recently coming off his second Tommy John surgery which forced him to miss the 2020 season – his first Tommy John surgery was in 2014. The right-hander also missed the entire 2015 season after undergoing sports hernia surgery. Taillon was also hit in the head with a line drive during only his SIXTH career start in 2016. Then after making 25 starts in 2017, he was diagnosed with testicular cancer, which was the worst of all the health issues. It was particularly emotional for Taillon as he had lost both of his parents to cancer.

The former No. 2 overall draft pick officially beat cancer in 2018 and pitched phenomenally over the whole season. Flash forward to now, and Taillon will now look to replicate that 2018 season or at least come close. He joined the Yankees on January 24 when the Yankees acquired him for right-handers Miguel Yajure and Roansy Contreras, infielder Maikol Escotto and outfielder Canaan Smith. Yajure was the Yankees’ best prospect out of that bunch, as he was their No. 15 prospect according to MLB Pipeline. In his first outing of the spring, Taillon pitched a 1-2-3 inning while striking out one on just seven pitches. Five of the pitches were for strikes. His pitching arsenal featured five fastballs (reached 94 MPH), a curveball, and a slider. Taillon will likely be the Yankees’ No. 2 or No. 3 starter for the season.

After a very tough 2020 season, Gary Sanchez started off the spring nicely with a LONG home run in his second at-bat. The bomb went over the batter’s eye in center field. In his first at-bat of the day, Sanchez walked, so it was a great day. Sanchez’s Comeback Player of the Year candidacy starts now. The Yankee catcher seemed to be in his head a lot last year and starting the spring off the way he did should do loads for his confidence. Many eyes will be on him this season after he was benched in favor of Kyle Higashioka in the postseason. The Yankees will likely have a very short leash on him, if he struggles at all he may get benched again. Nevertheless, it was a great first game for Sanchez.

With the Yankees down 3-1 in the fifth inning, the former 12th round draft pick Chris Gittens blasted a grand slam. The first baseman/designated hitter was drafted by the Yankees back in 2014 and has been up-and-down their minor league ranks. 2019 was his best season, as he slashed .281/.393/.500 with 23 homers, 77 RBI, and 58 runs scored. Gittens will likely start the year in Triple-A Scranton/Wilkes-Barre and could either get the call to the show or get traded if he continues to play well. He is currently not on the 40-man roster, but could get added at some point.