State of the Yankees Farm System

It is a surprise to no one that the Yankees farm system is not what it once was.  Just a couple of years ago it was ranked at the very top of most lists, but thanks to prospect graduations and trades, the system is now considered by many to be in the middle of the pack.

One thing is for sure; the Yankees lack the number of impact prospects that they once had. Cornerstone pieces like Aaron Judge, Gary Sanchez, Miguel Andujar, and Gleyber Torres are now cemented in the major leagues.  That leaves just Estevan Florial from that group of crown jewels that remain in the minor league system.  However, when you look at the system as a whole, the Yankees remain one of the deepest systems in baseball.  We have heard that said before, but what does it mean? 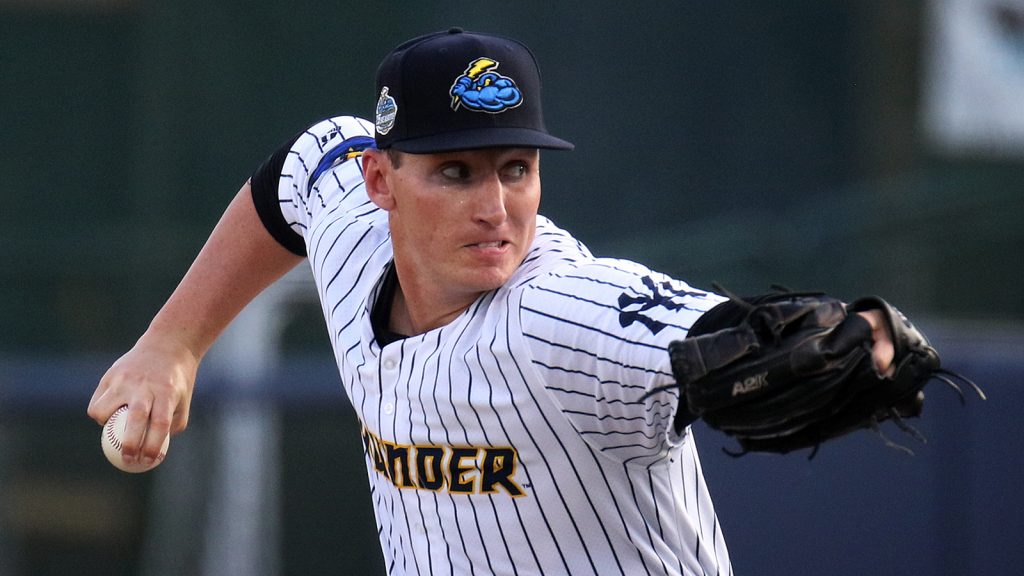 Fans have heard lots of talk about how deep the Yankees minor league system is.  Many misconstrued that for having a lot of impact potential All-Star talent in the system. What it really means is that the average player in the Yankees system has a higher floor than many in other systems.

Take for example a guy like Anyelo Gomez, who was just taken by the Red Sox in the minor league phase of the Rule 5 draft last week.  Gomez was on the Double-A reserve roster this past season after undergoing shoulder surgery.  He was an acceptable loss, but a potential quality bullpen arm that was taken in the major league phase of last year’s Rule 5 draft.  The Yankees have many arms just like that, and many prospects that have much higher ceilings. However, that does not negate the fact that the Red Sox acquired a potential bullpen arm that can contribute in the majors at some point in 2019.

That is what we mean when we talk about the depth in the Yankees farm system. There are many like Joe Harvey, who was recently added to the 40-man roster, who were not initially considered to be top-prospects, but have developed into quality pieces that will have something to contribute.

The Yankees depth is concentrated at certain positions, and admittedly a significant amount of it is at the lower levels of the system, much like it was in 2014 when Aaron Judge and Miguel Andujar were together in Class-A. 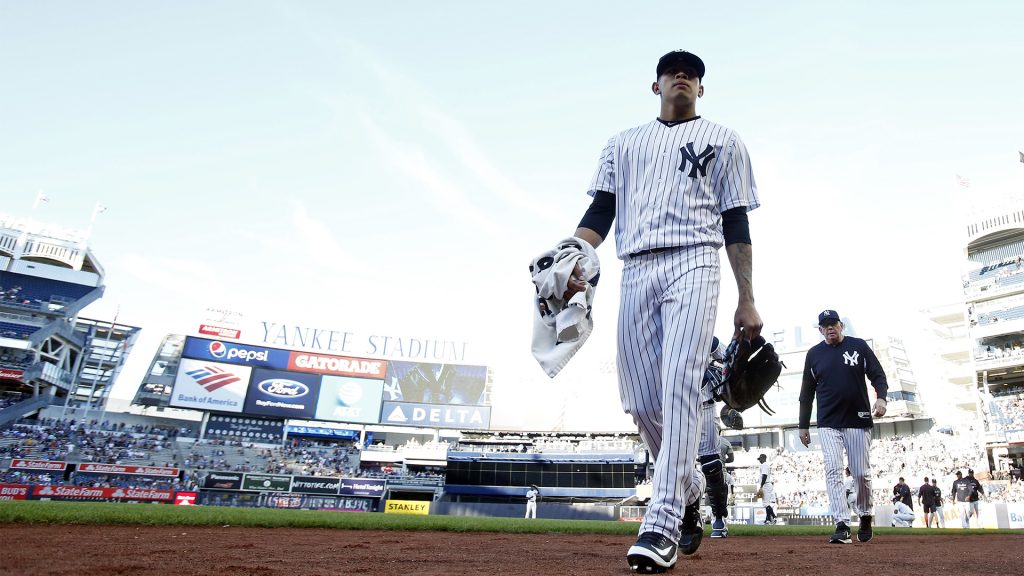 The majority of the Yankees depth comes on the mound.  The Bombers have long been known as an organization that develops quality pitching.  Current ace Luis Severino is a product of that developmental system, as was Jordan Montgomery, who came out of nowhere to win a major league job in 2017.  Others like Dellin Betances, Tommy Kahnle and Domingo German currently grace the 40-man roster.

Let’s not mistake this as saying the Yankees have had success in developing front-line starters outside of Severino. What they have succeeded in though, is bringing out the best in many pitchers who have gone on to have solid major league careers — Guys like Jose Quintana of the Chicago Cubs, Ian Kennedy of the Kansas City Royals, Mark Melancon of the San Francisco Giants, Mike Dunn of the Colorado Rockies, and more benefited from developing under the Yankees tutelage.

Even with success in launching many players major league careers in the past, the current state of pitching in the Yankees farm system is better than it has ever been.

Currently, the top pitcher in the Yankees farm system is none other than the Nicaragua-native, Jonathan Loaisiga.  The right-hander was inked as a minor league free agent that the Yankees took a gamble on and eventually added to the 40-man roster after less than 40 innings pitched in the minors. Behind Loaisiga is a group of up-and-coming prospects, most notably Mike King and Deivi Garcia, both of whom broke out in their own way in 2018.  Then there are guys like Roansy Contreras, Luis Medina, Clarke Schmidt, Matt Sauer, among others that are on the rise in the lower minors. Let us not forget about once highly-touted prospects Chance Adams and Domingo Acevedo, each of whom had suffered setbacks in 2018, but are looking to bounce back in 2019.

The Yankees have tremendous depth on the mound, but most of it is from the right-side. There are however, quite a few left-handers that should not be overlooked. Southpaw Nestor Cortes was taken in the Rule 5 draft in 2017 by Baltimore, but was returned to the Yankees with a few innings of MLB experience.  Stephen Tarpley made his MLB debut in 2018, and Phillip Diehl is knocking on the door.  Also, don’t sleep on Dalton Lehnen and Anderson Severino, whom Yankees fans could see emerge in 2019.

There are plenty of others throughout the system that are unknown to the casual fans, but are true sleeper prospects like Montgomery was in 2017.  These pitchers like Harold Cortijo, Adonis Rosa, Matt Wivinis, and Anderson Munoz are poised to make a statement in 2019.  Rosa and Wivinis are on the verge of being major league ready and could very well be up by the trade deadline. 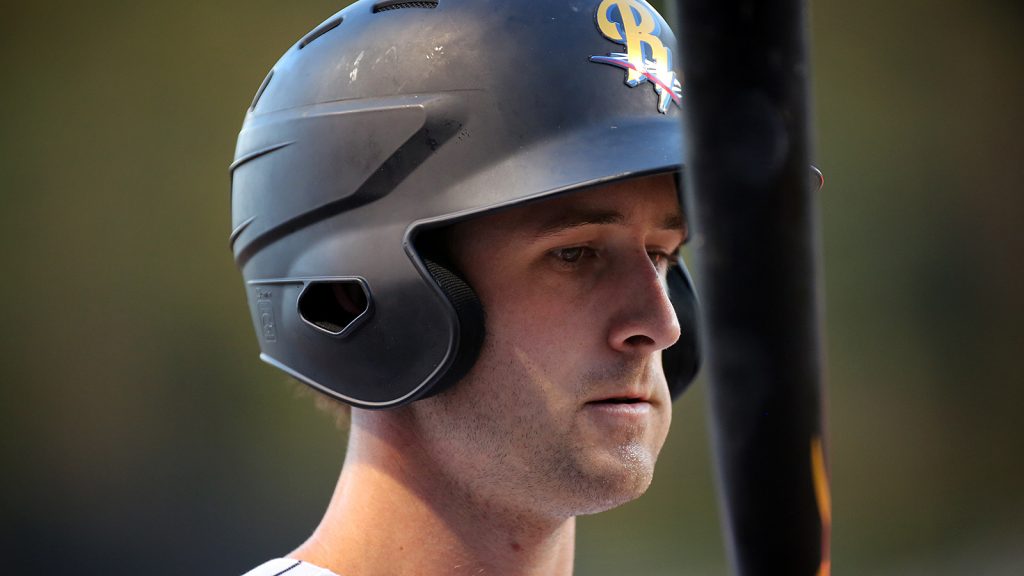 The Yankees outfield depth is one that not too many talk about.  While impact-level talent like Judge is not as prevalent in the upper levels, there are plenty of guys that have the ability to at least get a cup of coffee in the majors.

Florial is clearly the top-outfielder in the system and is a top-100 prospect that our own Paul Pagnato III believes is a true impact prospect the Yankees can use in centerfield sooner rather than later.  Moreover, I agree, Florial is a top-talent and a true five-tool guy that is destined to play centerfield in The Bronx, possibly taking over for Aaron Hicks once he hits free agency (or slides over to left field).

In the upper levels of the system, the Yankees have guys like Zack Zehner, Ben Ruta, and Trey Amburgey.  None of those above guys are big-name prospects that the casual fan would have heard of.  However, each of them has the profile of a potential fourth outfielder. Zehner is the closest one to the majors, having risen quickly through the system.  This past season he hit .270/.339/.459 in 119 games between Double-A and Triple-A.

Diego Castillo is a sleeper prospect in the infield that most fans do not know about. (Bryan Green)

Outside of the outfield, the Yankees have the most depth at the middle infield positions.  Yankees fans know of Tyler Wade, who has exhausted his prospect eligibility. Wade has yet to reach his potential in the major leagues and can get a chance to prove himself in 2019.

Behind Wade is Thairo Estrada, who pretty much lost most of the 2018 season after being shot in a robbery in his home country of Venezuela last winter. After having the bullet removed, he finally returned to game action in the Arizona Fall League where he showed flashes of the prospect that he was in 2017.

Kyle Holder, a defensive whiz, has battled injuries but has grown from a no-bat, all-glove prospect to a solid infielder who at worst is a utility player that can fill in at second base, shortstop, and third base.  Like Wade and Estrada, it is possible for Yankees fans to see Holder in the majors at some point in 2019.  Others like Gosuke Katoh and Hoy Jun Park are also in the upper levels of the system.

Diego Castillo is a middle infielder that does not get talked about, especially since he did not have as much fanfare as Wilkerman Garcia when he signed as part of the 2014 international free agent class.  However, Castillo has developed and leaped over Garcia on the prospect depth chart.  Castillo will likely open the 2019 season in Double-A.

Erik Swanson was dealt to the Mariners along with Dom Thompson-Williams and Justus Sheffield for James Paxton. (Martin Griff)

While many of the players that I have mentioned above could help the Yankees by actually playing for them, other prospects serve them in different ways.  One strategy the Yankees have employed in the most recent years was to trade depth pieces for bonus pool space in the international free agent market.  The other strategy is trading them for complimentary pieces at the major league level and in the upper minors.

Depth pieces like Dom Thompson-Williams and Erik Swanson were packaged together with Justus Sheffield for James Paxton.  During the season, the Yankees traded depth pieces like Abiatal Avelino and Juan De Paula to the Giants for Andrew McCutchen.

It says a lot about the strength of the system when the Yankees are able to use these extra pieces without taking as big a hit in their depth and still manage to get something usable back like the international bonus pool money or a top-of-the-line starter in Paxton.  While the system is not as deep in top-talent like it was just a short time ago, it is deep in other ways.  Many of the pieces in the farm system are still valuable; nothing can prove that more than the fact that the Yankees lost six prospects in the Rule 5 draft.

One thing is for certain, we have not returned to the days of a barren system that had no options to help the major league club.  Those days are firmly in the past.