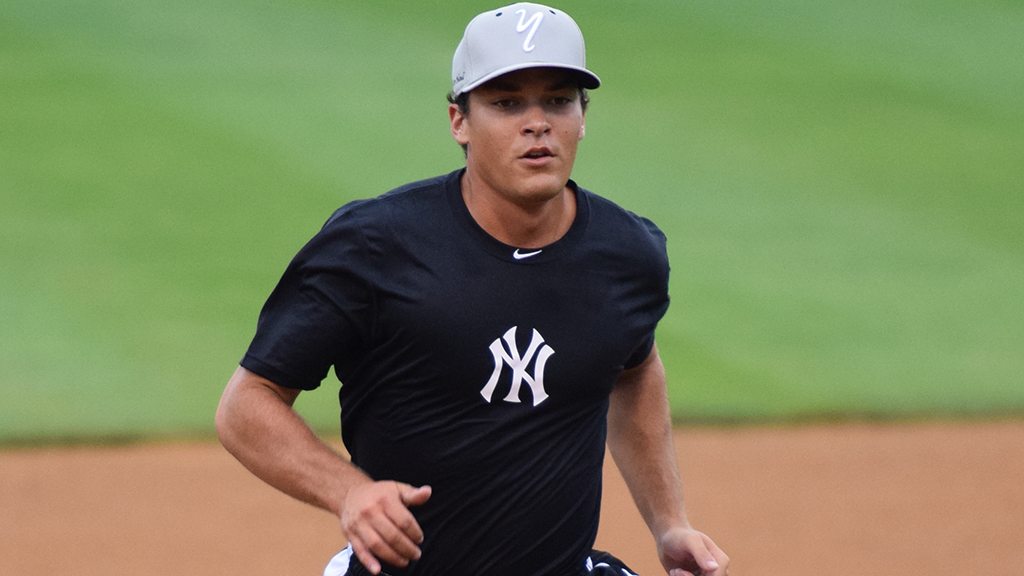 The Staten Island Yankees have a few things in common with their Bronx parent club. Both, for example, play in the New York City area and both share the nickname of Yankees.

Unfortunately, both are working on multi-season playoff droughts as well.

2014 continued an unwelcome trend that has struck Staten Island since their sixth, and most recent, NY-Penn League title in 2011. Despite sending four players to last year’s NY-Penn League All Star game, including returning IF/DH Ty McFarland, the Yankees missed out on the postseason for the third year in a row, just missing a winning record at 37-38.

Manager Mario Garza moved on after one season, and the Yankees brought in Pat Osborn to take over. Armed with a mostly new roster, it’s up to Osborn and a new cast of characters, including first round pick SS Kyle Holder, to ensure the Yankees are playing past Labor Day weekend.

Osborn announced that Derek Callahan had earned the opening night start against Brooklyn on Friday night. Callahan struggled in a couple of starts with Class A Advanced Tampa (0-2, 9.39 ERA), but impressed in 2014, spending a majority of the season in the Gulf Coast League before making a single start with Tampa. He ended the year at 1-0 with a 2.87 ERA, striking out 23 over 37 ⅔ innings. The former Gonzaga Bulldog is ready to take the hill. “I’m ready and real excited for it,” he said. “My plan is the same it’s always been…get ground balls, get strikeouts, and don’t let the moment get too big.”

Osborn also noted that Luis Cedeno and Matt Borens, both right handers, will start the next two games, the first of which will be on the road at MCU Park. Cedeno has gotten a full workload in already this season, having started nine games in Charleston of the South Atlantic League. He posted a 3-6 record with a respectable 3.52 ERA, but he showed major promise last season in the Gulf Coast League, striking 40 in a mere 35 innings. Borens, on the other hand, returns for another year of service in Staten Island. Last summer, he posted a 2-1 mark with a 3.89 ERA.

The Yankees added some arms in the middle rounds of the draft, many of whom will make their debuts coming out of Richmond County Savings Bank Park’s bullpen. Josh Roeder (21st Round) left Lincoln as Nebraska’s all-time saves leader. San Diego State product Mark Seyler (19th Round) was 5th in the Mountain West Conference in strikeouts with 78.

The prospects will have plenty to learn from new pitching coach Butch Henry. Perhaps best known for his memorable first career MLB hit, an inside the park home run as a rookie on the 1992 Houston Astros, Henry has made a name for himself as a coach. After some time in the Reds’ organization, he won an American Association of Baseball Independent Manager Award. Many players sang Henry’s praises before the season, saying that they’re read to work with the MLB vet.

Like He-Man, the Yankees rookie infielders have the power. In the 6th round, the Yankees took Brandon Wagner out of Howard College, bringing with him his .314 average and 49 RBIs (in 48 games). Three rounds later, the Yankees selected Ryan Krill out of Michigan State who kept plenty busy this baseball season in East Lansing, smacking 13 home runs and driving in 57 runs, marks that both ranked second in the Big Ten.

However, all eyes will be on Kyle Holder, a University of San Diego shortstop selected by the Yankees late in the 1st round at number 30, a compensatory pick for losing David Robertson to the Chicago White Sox. Holder’s spectacular offensive numbers, headlined by a .348 average, was enough to earn him the West Coast Conference Player of the Year award (not to mention put him in consideration for the Brooks Wallace Award, honoring college baseball’s best shortstop), but the 21 year old was considered to be the best fielder in the draft, possessing a glove that Yankees President of Scouting Damon Oppenheimer compared to Omar Vizquel. The first round pick knows why he was brought in.

“I was want to go out there and help my team win,” said Holder, who recently came to terms with the Yankees on a deal that included a $1.8 million signing bonus. “I’ll do whatever I can to make that happen, whether it’s getting a key hit, making a diving play in field, something like that.” If his one year with the Toreros is any indication, he’s more than capable of making that happen.

McFarland will return for his second year in the Staten Island pinstripes. For his first year in professional ball, McFarland had a very solid year, batting .278 with 40 runs driven in, the latter of which good enough for 5th in the NY-Penn League. Keeping warm in Tampa and Charleston prior to the commencement of Staten Island’s season the James Madison alum proved he could play any position in the infield last season, as he was one of Staten Island’s most durable players, having appeared in 62 games.

Rounding out the infield are Thairo Estrada and Drew Bridges. Estrada, another returnee, showed some speed last season, stealing 8 bases in 23 games. On the other hand, Bridges, selected out of high school in the 20th round of the 2013 draft, had 15 doubles in the Gulf Coast League last season.

Osborn announced that Eduardo de Oleo will handle catching duties. de Oleo was finally called up to the Single A ranks last season, driving in 41 runs after spending the first three years of his pro career between the Dominican and Gulf Coast Leagues.

More rookies will populate the outfield this season out on Staten Island. With their 4th round selection, the Yankees took Jeff Hendrix, who they believe will make a good outfield prospect. The Hendrix selection has drawn comparisons to Michael O’Neil, who was taken in the 3rd round of the 2013 draft and stole 42 bases for Charleston last season. Zack Zehner and Jhalan Jackson were also selected, and new hitting coach and former 1st round pick Eric Duncan is very eager to work with the duo.

With a new regime in and new talent, most notably a first round pick (which the team was deprived of last season), Staten Island could very well end their three year playoff drought. The excitement has spread through the island, as Friday’s opening night tilt with the rival Cyclones is sold out, leaving management to sell just standing room only tickets. The other date to look out for on Staten Island’s schedule is on August 8, when not only the Hudson Valley Renegades come to visit, but Game of Thrones mastermind George R.R. Martin as well. If the Yankees’ new drafted talent meshes well with the returning veterans, it put a grisly end to Staten Island’s playoff drought that Martin himself would be proud of.