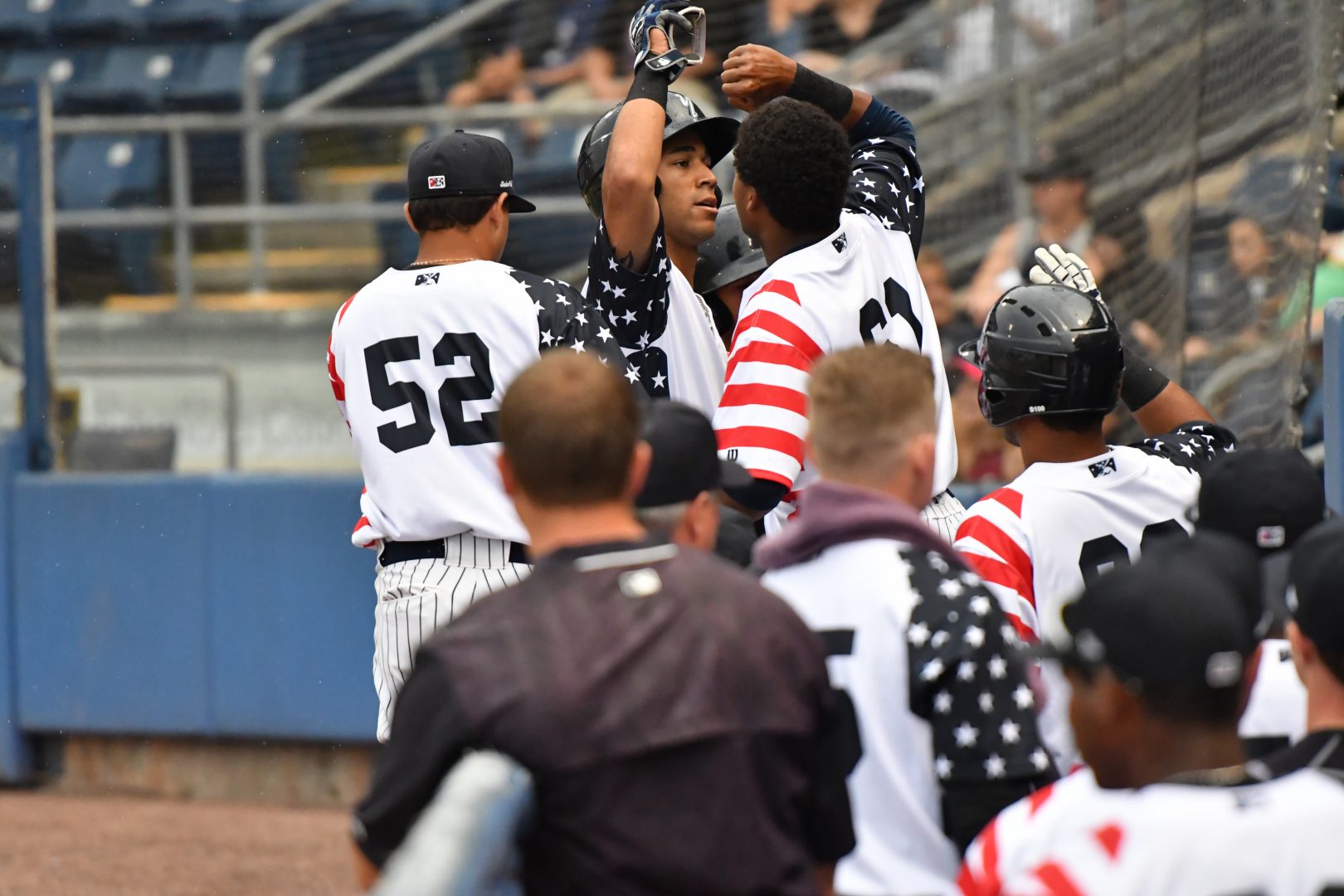 Dom Thompson-Williams celebrates after hitting a homerun for the first run of the game. (Robert M. Pimpsner)

STATEN ISLAND – The Yankees are on a winning streak again.

The win also clinched the series victory for the Yankees – improving their record in series’ on the season to 7-1-3.

“It’s a fun thing when you’re winning,” said Staten Island Manager Julio Mosquera. “That was a great game out there tonight. The boys played hard, everyone competed, the pitchers did a great job and there’s really nothing more that I could ask from them.”

Jio Orozco (1-0) took the ball for the Yankees in this game, making his Staten Island debut after getting the call from Pulaski, and he did not disappoint. The right-hander weaved his way through the Renegades’ lineup to put up 6 1/3 solid innings where he only gave up three hits, no runs, walked three, and fanned six. 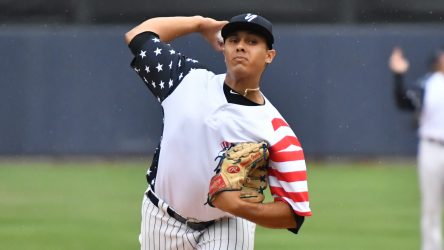 “I like what he showed me tonight,” Mosquera said about Orozco. “He attacks hitters. He doesn’t back down – which is a good thing. He’s got great stuff, and he was mixing his pitches and just attacking, attacking, attacking. Something we’ve been preaching here the whole year, so it was good to see him come in and do the same thing.”

“I felt good tonight. I felt like my command was there. You know, I lost focus on a couple of walks but other than that I had all of my pitches working and I just trusted my catcher and tried to hit his glove every time,” Orozco said after his outing. “My fastball was there, and I threw all three of my pitches for strikes which opened up the zone. I tried to work in and out and just hit my spot.”

Once again, the Staten Island offense did not provide much support, but they got all they needed in the second inning when center-fielder Dom Thompson-Williams went yard for the second straight game. The solo shot hit off the batter’s eye in straight-away center to give Staten Island the early lead that they would not relinquish. 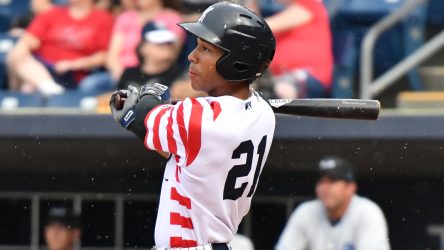 Dom Thompson-Williams connects for a homerun as the rain falls on July 22, 2017. (Robert M. Pimpsner)

“We know he has that power,” Mosquera said of Thompson-Williams. “He’s a strong kid. He’s been taking some good swings up there, so that was awesome to see.”

Josh Roeder came out of the bullpen in relief of Orozco and posted 3 1/3 stellar innings until he ran into trouble in the ninth when the Renegades put the tying runs in scoring position. But to that point, Roeder only surrendered two hits, did not walk anyone, and struck out three.

Eduardo Rivera got the nod to get the final out of the game and he quickly got the only batter he faced to pop-up in the infield to end the game.

“Roeder did a great job today and then Rivera came in and got that big out,” Mosquera said. “But we’ve been seeing this the whole year, the guys come in and they compete. Roeder was solid and he kept the game good for us, made sure we had a chance to win, and then Eddie closed the door.”

Manny Argomaniz added some breathing room for the Yankees with an RBI double in the sixth that scored Timmy Robinson.

The shutout is the fourth of the season for Staten Island. 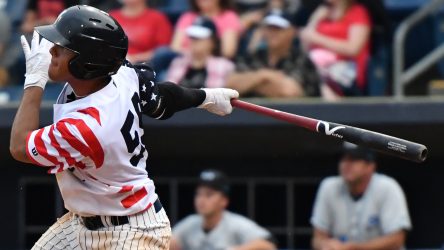 The Yankees will now look to keep their momentum rolling as they welcome Lowell to town on Sunday to open a three-game set. First pitch is set for 4 p.m.

“You can see the difference in how they’re playing now,” Mosquera said. “They’re hustling out there, running hard, taking the extra base, staying aggressive, and that’s how we want to play the game and they’re right back into it.”