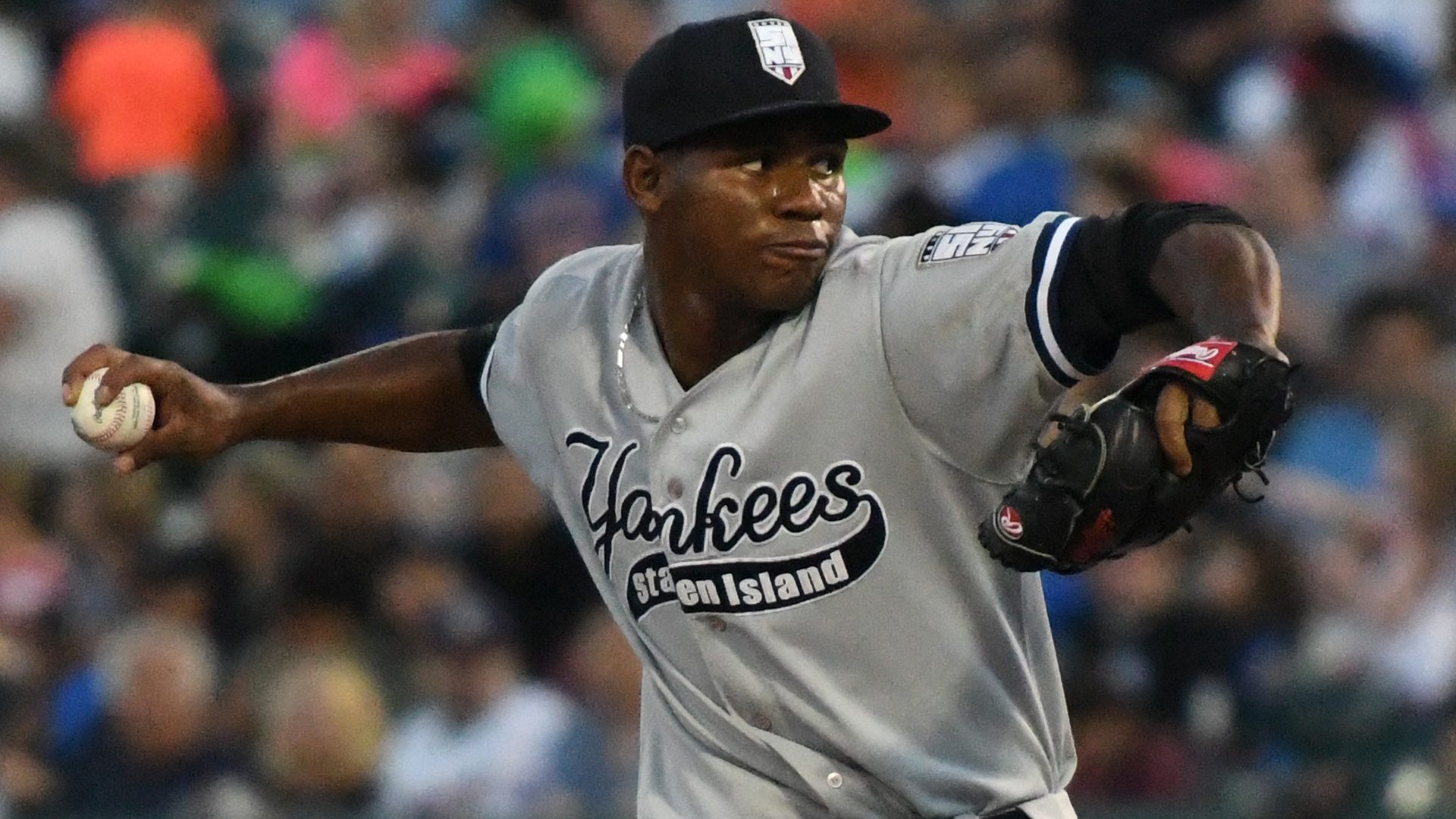 Ladies and gentlemen, Staten Island Yankees baseball is back.

After a rainout for the team’s home opener on Monday, the SI Yanks opened their season with a 7-4 victory over crosstown rivals Brooklyn Cyclones in front of a packed house at MCU Park on Tuesday night.

This was the Yankees (1-0) third opening day victory over the Cyclones (0-1) since 2007, and the first time ever that Staten Island has won consecutive opening days since the teams began this tradition in 2005.

“It feels pretty good to get the first one,” said first-year SI Yankees manager Julio Mosquera with a smile. “These boys did a pretty good job out there. Our pitchers did a hell of a job out there today, and I think our hitters got a couple of hits in the clutch – which helps a lot.”

“These boys have been working a lot down in extended spring so they were anxious to get out here, and I was excited for them. And they came out and did a real good job today.”

Making his New York-Penn League debut, Yankees’ starter Jorge Guzman (1-0) was sharp early – facing the minimum nine batters through the first three frames – and after some trouble in the fourth inning, he settled down again to turn in five solid innings where he surrendered three runs on three hits while fanning four and walking only two.

“He’s got electric stuff,” Mosquera said of his starter. “He’s one of the really good arms we have in this organization – if he’s not the best. And I thought he controlled himself very good tonight – he did get into that little jam, but he came out of it. He reached back, and made some pitches, and that’s what we want to see.”

“I just felt relaxed out there today,” Guzman said. “I didn’t feel any pressure, I felt good.”

“I’m happy with the way I pitched, but now I just need to keep working, and stay focused.”

On the other side, Brooklyn’s starter Jake Simon (0-1) struggled. The southpaw only lasted four innings as he he gave up three runs (all earned) on two hits and walked four.

“I think we did a good job of being patient (at the plate) early in the game,” Mosquera said of his offense. “We got some key walks, guys weren’t swinging at bad pitches, you know, for this being a group of young hitters it’s good to see.” 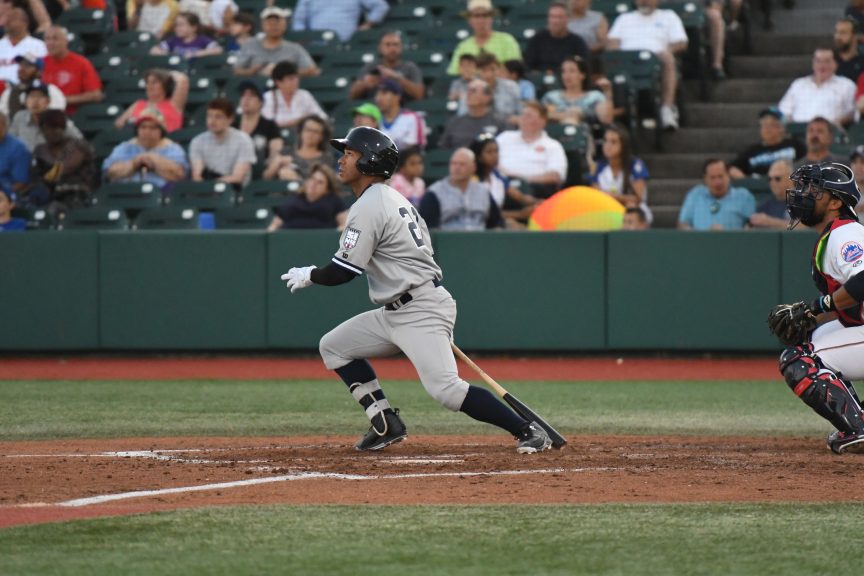 Staten Island got the scoring started in the third inning when centerfielder Dom Thompson-Williams ripped an RBI-double to the gap in center field.  The very next batter was second baseman Oswaldo Cabrera and he followed that up with a two-RBI single of his own.

The lead would not last though.

The Cyclones responded with three runs to tie the game at 3-3 in the top of the fourth inning – capitalizing on sloppy play by the Yankees. Brooklyn plated three runners off of just one hit. That was because of two walks, a fielder’s choice that did not result in an out, a hit batter, and a pair of errors in the inning.

“I thought (Guzman) picked up a little extra gear there and did a good job to get out of that inning,” Mosquera said. “I don’t think he really pressed at all, that’s just one of those things that’s going to happen.”

“He’s just got a little hiccup in there, and that’s a good thing. It’s a good thing to have early in the season too because he proved to us that he could get out of it.”

Staten Island would respond. Cyclones’ reliever Joe Napolitano (2IP, 2H, 4ER, 3BB, 2K) struggled with his command in the fifth inning, and the Yankees pounced. Staten Island scored four runs in the fifth to take a 7-3 lead on just one hit in the inning thanks to three walks, two passed balls, a wild pitch, and a balk from Napolitano.

However, that one hit was a rocket triple off the bat of first baseman Dalton Blaser that drove in two of the runs.

“We don’t really panic,” Mosquera said of his squad. “It was early in the game and these guys trust what they can do. They’re professionals and they know that in those situations you don’t just panic. You go right back in there and go get them.” 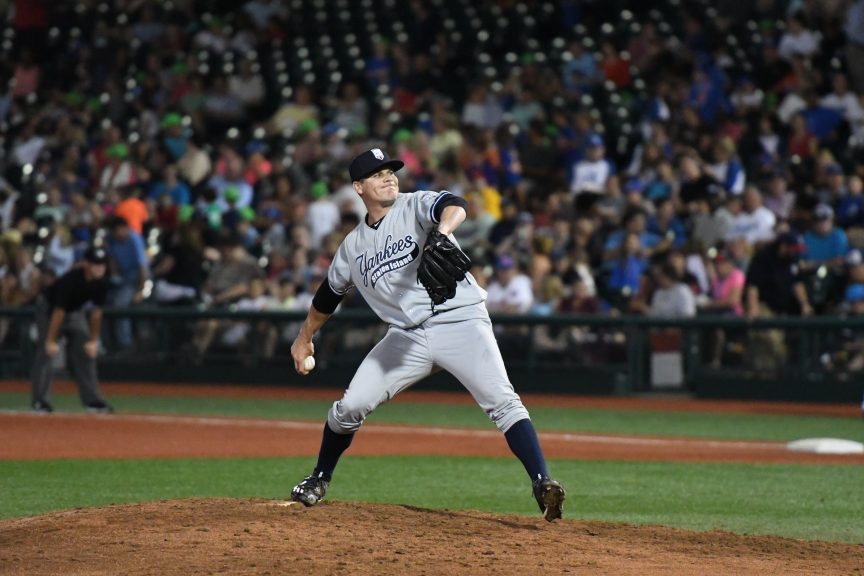 Branden Pinder came in to pitch for Staten Island in the sixth inning – his first rehab appearance since undergoing Tommy John surgery last year – and put together an okay outing.

“He’s throwing the ball a lot better,” Mosquera said of Pinder. “He was a little amped up in his first inning, you could tell he was excited. But that’s OK. It has been a long rehab for him.”

“But I thought he threw the ball OK. The main part is that he’s still healthy and he finished the game healthy. The outcome doesn’t really matter as much as how he comes out of it feeling, so if he’s still feeling good we can deal with whatever the outcome is.”

The Yankees will now head north to start a three-game set with the Hudson Valley Renegades at Dutchess Stadium in Fishkill, NY on Wednesday. First pitch is set for 7:05 p.m.

“I think these kids went out there today, and did their best, and they know there’s still things to fix, but we will get better and it’s just a good thing.”