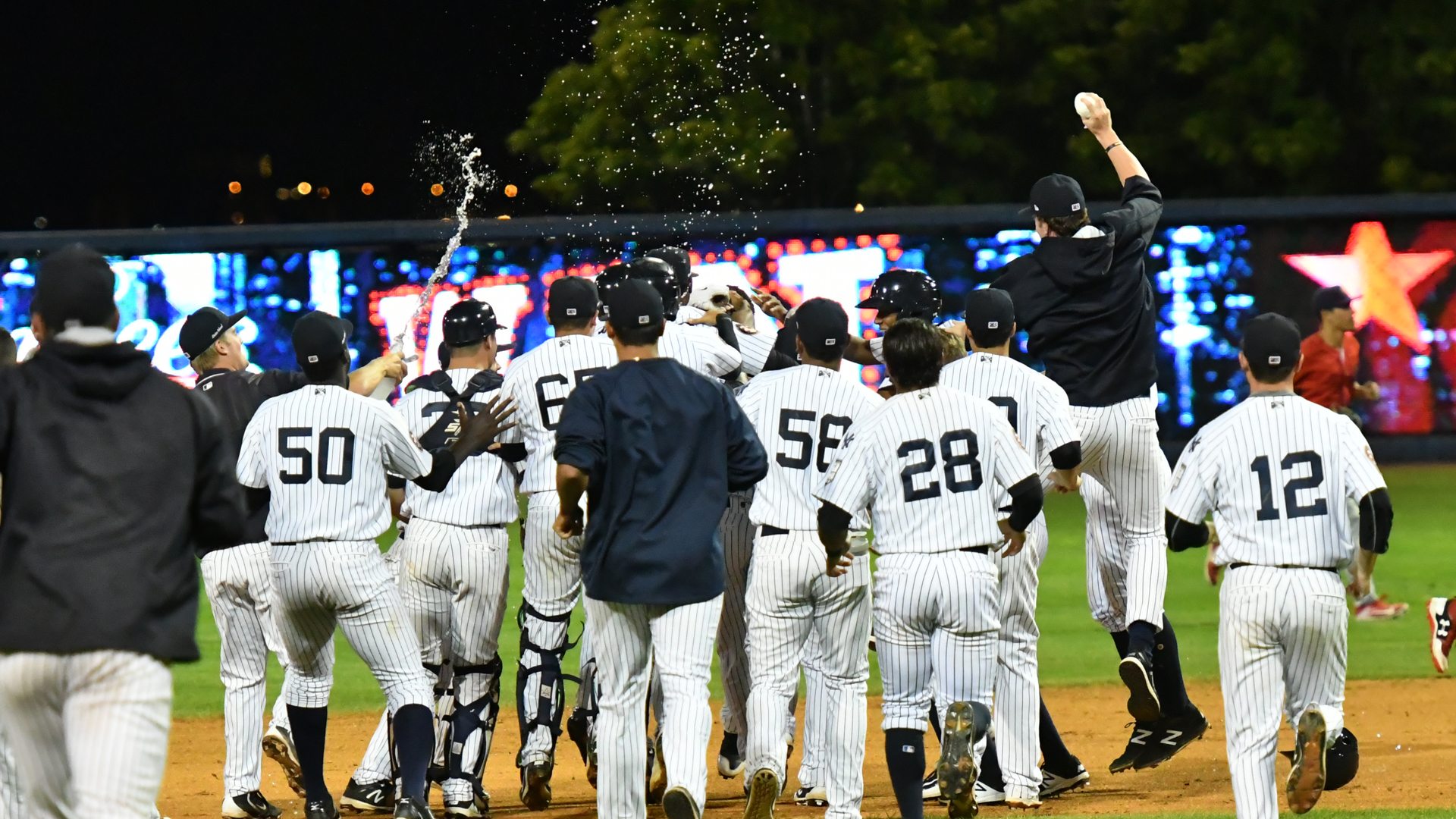 The Staten Island Yankees celebrate on the field after Wilkerman Garcia had a walk-off base hit against the Williamsport Crosscutters. (Robert M. Pimpsner)

STATEN ISLAND – The never-say-die Staten Island Yankees did it again.

After being no-hit for 5 1/3 innings, and trailing through most of the game on Tuesday night, the Yankees rallied late. In the bottom of the ninth inning, with one out and the bases loaded, leadoff hitter Wilkerman Garcia delivered a walk-off base hit to secure a 3-2 victory over the Williamsport Crosscutters (24-20) at home.

The win also kept Staten Island (28-19) atop the McNamara Division in the New York-Penn League. 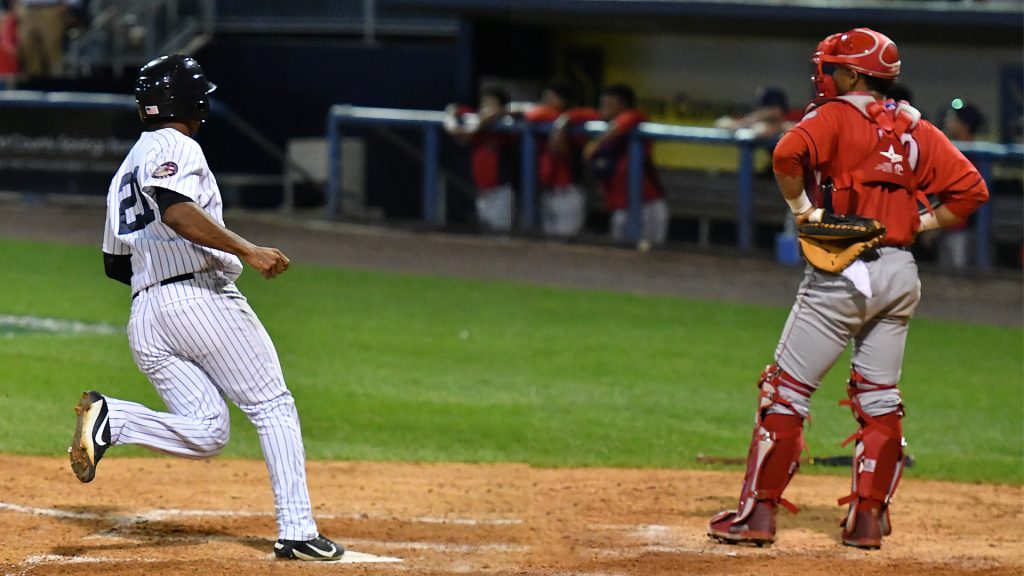 “These guys just don’t give up,” said Staten Island manager Julio Mosquera. “I mean, you gotta tip a cap to (Williamsport’s) starter, he kept us off the bases pretty much the whole game, but then the guys picked it up.

“It’s a good thing to see the boys get back to what they’ve been doing the whole year. It was fun.”

“I wasn’t really thinking about much heading to the plate. I was just hoping to get a good pitch and hit it,” said Garcia, who continued to round the bases with his hands in the air after the winning run crossed the plate. “I have no words to describe that moment. It was just so exciting.”

Jorge Guzman (3-2) took the ball for the Yankees, and he appeared to be unsettled early as gave up a walk and a base-hit to start the game. However, Guzman quickly settled down and left both of those runners stranded. 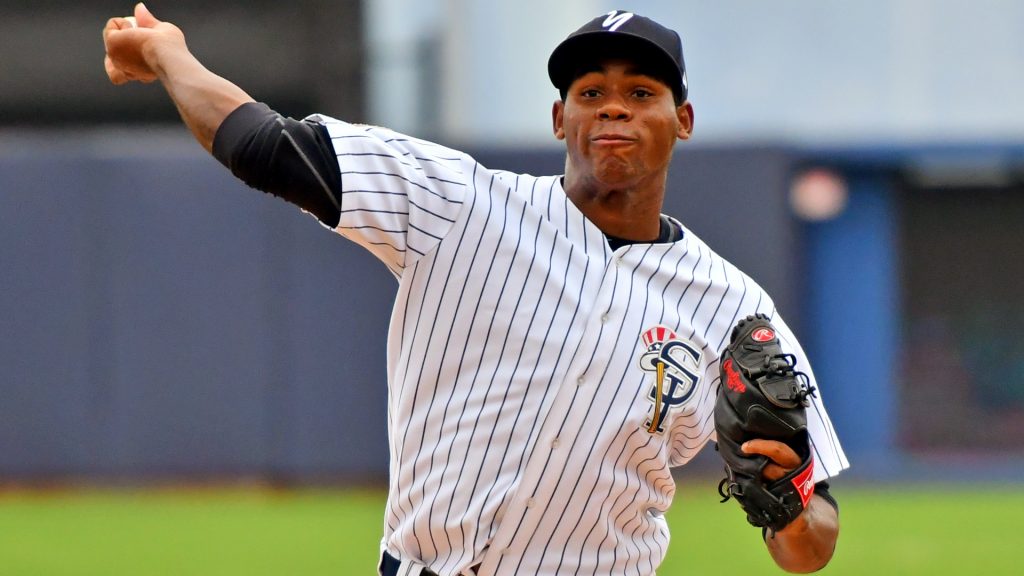 The imposing right-hander went five innings, scattered five hits, with one run (earned) while walking two and fanning eight. Guzman’s fastball sat in the 97-100mph range while touching 101 only twice. He also threw his change-up and curveball in the 85-91 range to keep hitters off-balance.

Josh Roeder came on in relief of Guzman to start the sixth, and the second pitch he threw was launched over the wall in right field to put the Crosscutters ahead 2-0. But, after that dinger, Roeder would settle in to supply 3 1/3 key innings of work as he did not give up another run, only two hits, walked one, and struck out four. 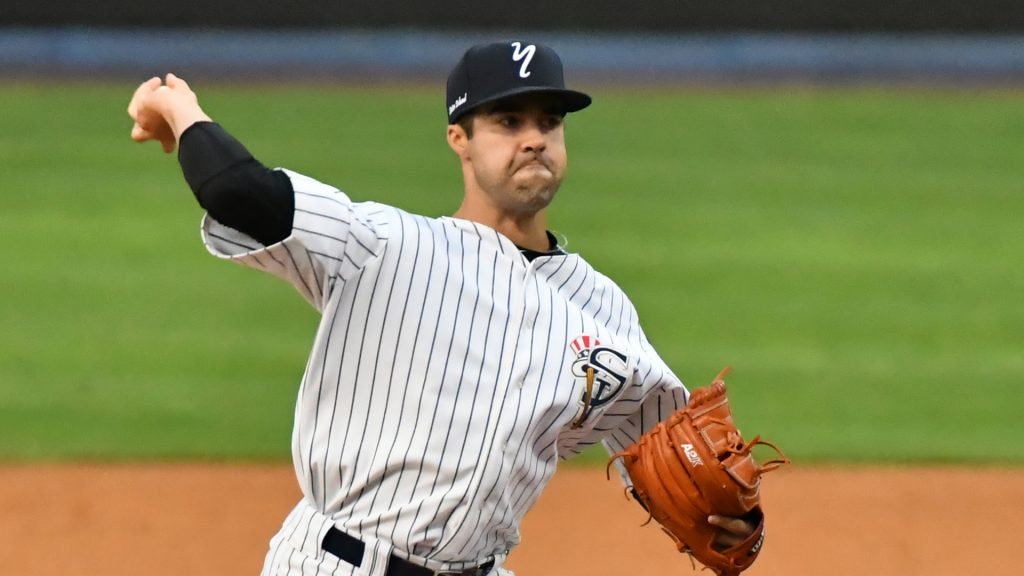 “One of the best things about a game like this is that I have to give a nod to our pitching staff, because they kept us in the game,” Mosquera said. “The game easily could have escalated, and we could have been down four or five runs, and then it really would have been tough. But that didn’t happen, and then the guys know that two runs, one run, we’re still in this one. The pitching staff gave us a chance to come back.

“What I saw from (Roeder) after [the home run] is what impressed me – he pitched, he competed. Look, you’re going to give up a home run here and there, but I was happy with him, and I told him that in the dugout. I said, ‘Tremendous job today, son. You kept us in the game.’ So that was great to see from him.”

It was Williamsport’s starter Kyle Young who dominated this game early on. The southpaw was perfect through 4 2/3 innings and did not give up a hit until the sixth.

“He kept us off balance with his off-speed pitches,” Mosquera said about Young. “He kept his fastball down and away, and he mixed in a breaking ball and a change-up, and he gave us a hard time today.”

But, in the sixth, Cesar Diaz got the first hit of the game for the Yankees with a single to right. Then, with two on and two outs, Kendall Coleman delivered with a base-hit back up the middle to tie the game up at two.

“That was a very important right there,” Mosquera said of Coleman’s two-out hit. “I told him (before the at-bat) look, they’re going to give you something to hit. And he had a great at-bat and got a base hit up the middle to tie the game, and things started rolling.”

That set the stage for Garcia’s late heroics. 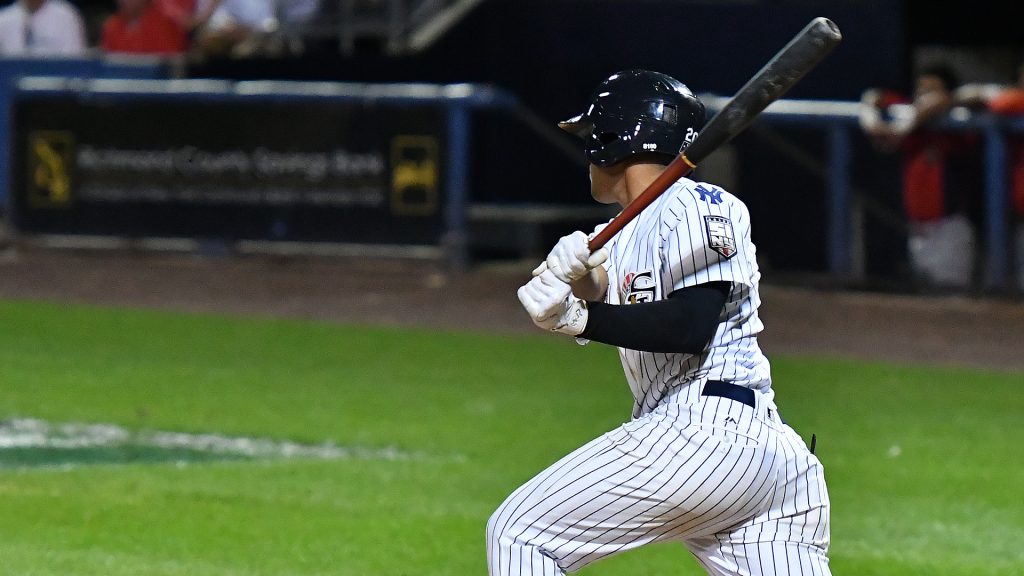 Wilkerman Garcia got the walk-off base hit with the bases loaded to give the Staten Island Yankees the victory. (Robert M. Pimpsner)

“I told (Garcia) in the dugout, you gotta be aggressive in this at-bat,” the Yankees manager said. “He’s gonna try to come in at you. He’s gonna try to blow a fastball by you right away, don’t miss it… And then he didn’t. He did his job.”

“This was a huge for us,” Garcia said, still smiling. “It kept us in first place. So now we just gotta keep playing well and do the best we can.”

The Yankees will continue their three-game set with Williamsport on Wednesday night. First pitch is set for 7 p.m.

Did you hear that?

When Julio Mosquera was asked about the reaction of the bench when Diaz broke up the no-hitter, he said: “The boys just started jumping in the dugout, and when I looked over I thought somebody had just won the PowerBall.

“So they got happy, and from there, things just started rolling.”