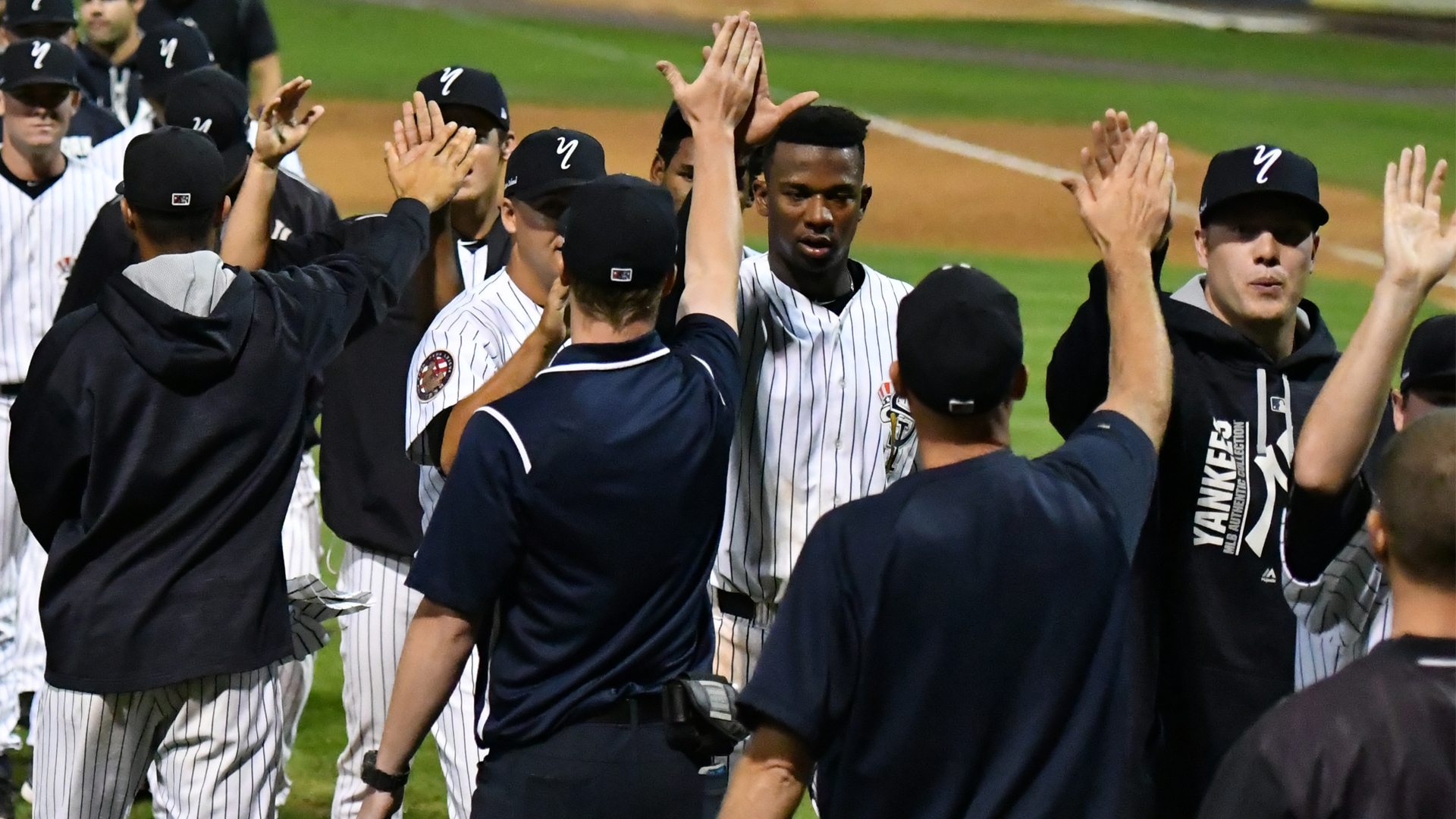 The Staten Island Yankees celebrate once again as they won in walk-off fashion for the second consecutive night. (Robert M. Pimpsner)

STATEN ISLAND, N.Y. – When the calendar shifted to August, the Staten Island Yankees suddenly found themselves in a pennant race within the McNamara Division.In the second game of their series against the Williamsport Crosscutters on Wednesday, Staten Island played an 11 inning affair that contained a taste of playoff baseball as Manny Argomaniz‘s fielder’s choice led to a 3-2 walk-off win.

“It’s good to walk away from a long game and get the win, especially after our pitchers did so well,” Argomaniz said. “You go up there trying to put together a good at-bat and put some hard balls in play and live with the results.” 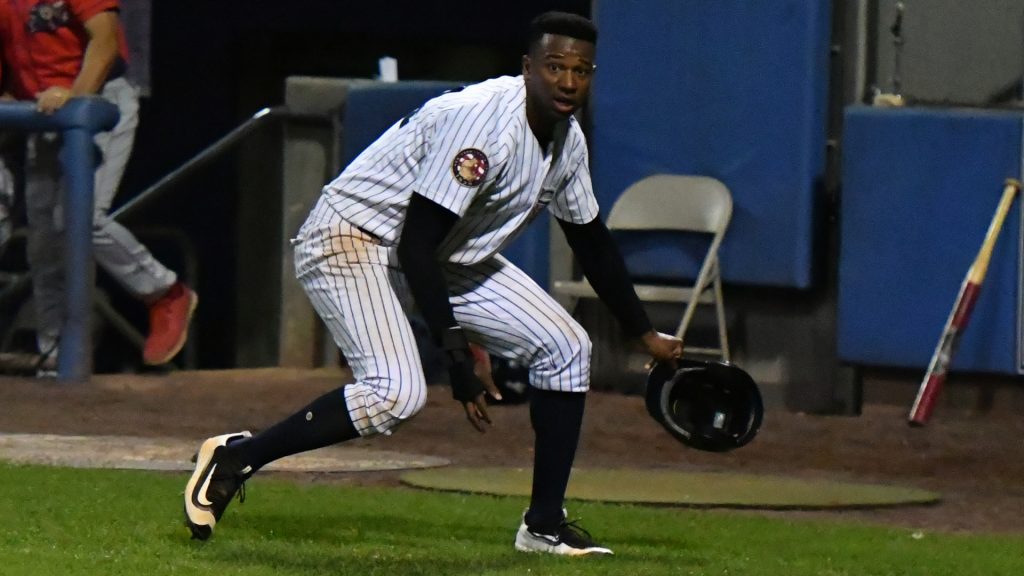 Kendall Coleman drops his helmet after scoring the winning run to join the celebration at first base. (Robert M. Pimpsner)

Argomaniz, who entered the game as a pinch-runner in the place of an ailing Cody Brown, drove in Kendall Coleman for the winning run in the eleventh inning after Staten Island loaded the bases with one out before he came to bat. The opportunity presented itself for the offense thanks to six innings of flawless relief work from the combination of Alex Bisacca, Greg Weissert, and Eduardo Rivera, who allowed just two hits and struck out nine.

“They (the pitching staff) have been the backbone of our team the whole year,” Staten Island manager Julio Mosquera said. “Since the beginning, they have been out there competing and gave us a chance to win. They were able to shut them (Williamsport) down for most of the game.”

“I thought he looked good out there,” Mosquera said of Orozco. “He competed and gave us a chance. He kept his emotions down and threw as many strikes as he could. I think he was focusing when he was pitching, which is good to see from him (on the mound).” 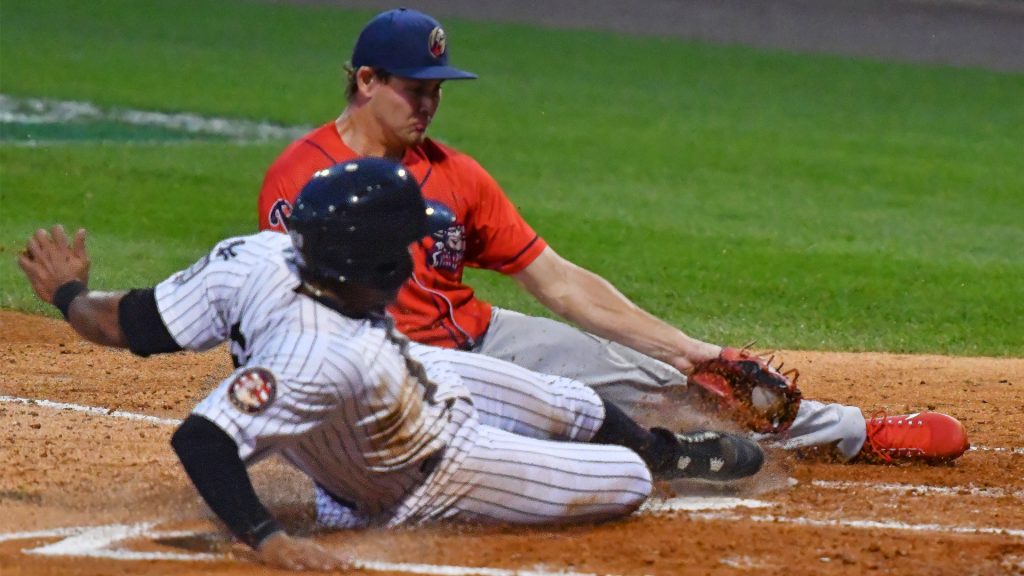 Timmy Robinson slides into home to score the first Yankees run of the game in the fourth inning. (Robert M. Pimpsner)

Williamsport starter Andrew Brown kept the Staten Island bats silent until the fourth inning when they rallied back to tie the score. Ryan Krill followed a Timmy Robinson hit by pitch with a double over the head of Adam Haseley in center field. Brown would uncork a wild pitch to plate Robinson, while Keith Skinner collected his second hit of the evening against a drawn in infield to knock home, Krill. Skinner had three hits in four at-bats to help pace the offense.

“Skinner has been swinging the bat pretty well. He’s been doing some work in the cages, and it’s paying off. It’s good to see from him. You always want those guys to do good things when they go out there. It was good to see him go out and compete.” 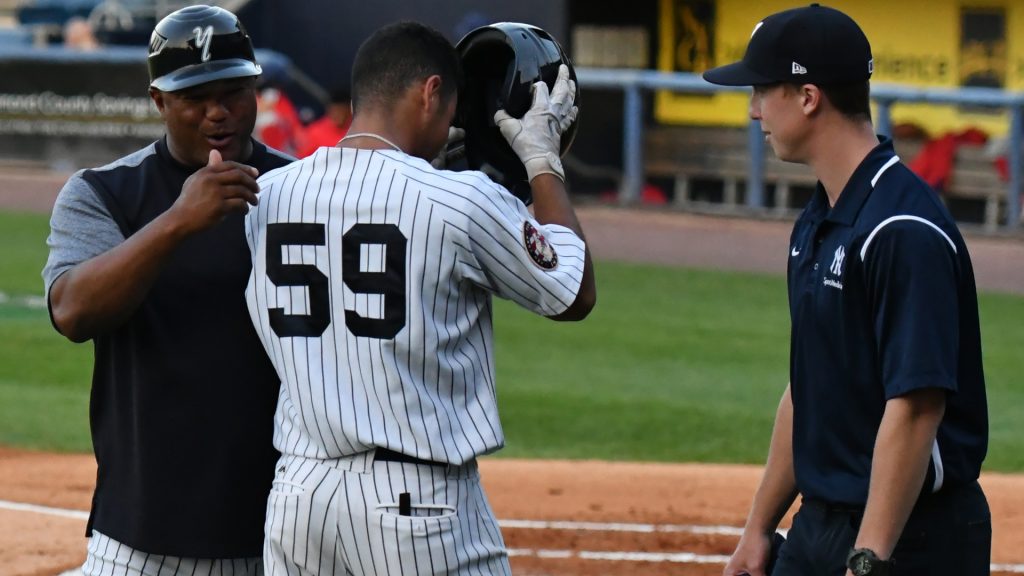 Wilkerman Garcia being evaluated after being hit by a foul ball off his foot. (Robert M. Pimpsner)

The victory for Staten Island did not come without its share of pain as shortstop Wilkerman Garcia fouled a ball off his ankle to lead off the bottom of the first. Garcia attempted to remain in the game until the third inning but departed in place of Danienger Perez. Another early exit came when second baseman Cody Brown left the game after collecting a base hit in the second inning. Brown appeared to favor his hamstring, and Argomaniz took his place as a pinch-runner.

“We will see how both of them come back tomorrow,” Mosquera said of Garcia and Brown. “Hopefully they will be back tomorrow and ready to play.” 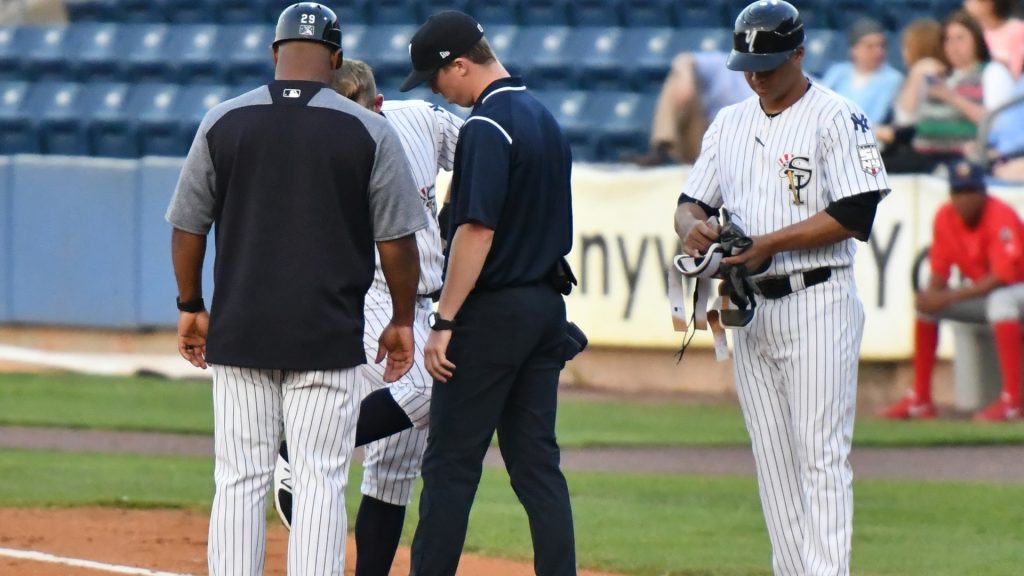 Cody Brown being evaluated at first base before being lifted from the game. (Robert M. Pimpsner)

By virtue of West Virginia’s loss to Brooklyn, Staten Island reclaims the top record in the New York-Penn League and remains 1.5 games ahead of the Aberdeen Ironbirds in the McNamara Division. With 11 of the league’s 14 teams in contention for either a division or wild card, virtually every game in August embodies the feeling of a postseason environment.