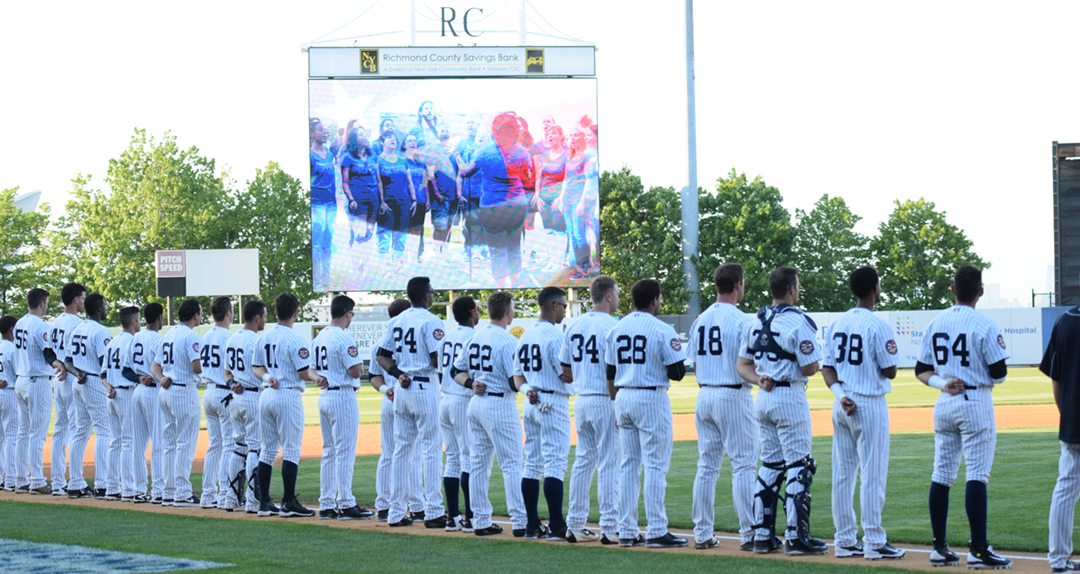 The Staten Island Yankees line up for the national anthem with the new video board in the outfield. (Robert M. Pimpsner)

STATEN ISLAND – The Staten Island Yankees are excited to announce the team’s 2019 season schedule. The SI Yanks kick off another action-packed summer celebrating their 20th Anniversary of baseball on Staten Island. The 2019 season will be even more special as the New York-Penn League All-Star Game will be played at Richmond County Bank Ballpark at St. George on Wednesday, August 21, 2019. This will be the Staten Island Yankees 2nd time hosting the league’s all-star game, the first being in 2010.

“We are excited to bring the New York-Penn League All-Star Game back to New York City and showcase everything great that Staten Island has to offer,” said Staten Island Yankees President Will Smith. “We look forward to working with our business and community partners to bring a first class event for our fans to Richmond County Bank Ballpark at St. George.”

The 2019 schedule is slated to be a memorable one. It all starts on Saturday, June 15th at 7 p.m. for Opening Day against the Brooklyn Cyclones. In addition to Opening Day, the SI Yanks will face off against the Brooklyn Cyclones four more times (June 22, August 11, August 13, September 1). The SI Yanks will host three Camp Days with two 11 a.m. first pitch dates (July 18 & July 22) and one noon first pitch date (August 15). The “Business Person Special” is back for 2019 with a special 2 p.m. start time (July 9). Since the early Sunday start times were such a hit last year, they are back in 2019 with four 1 p.m. start times (July 21, July 28, August 4, September 1). The other two Sunday games will begin at 4 pm (July 7 & August 11) and all other games will have first pitch scheduled for 7pm. Gates for Richmond County Bank Ballpark open to fans one hour prior to first pitch.

Fans can reserve season tickets, partial plans and group outings for the 2019 season by contacting a Staten Island Yankees ticket rep at (718) 720-9265 or by email at tickets@siyanks.com.

Advertisement. Scroll to continue reading.
In this article:Staten Island Yankees