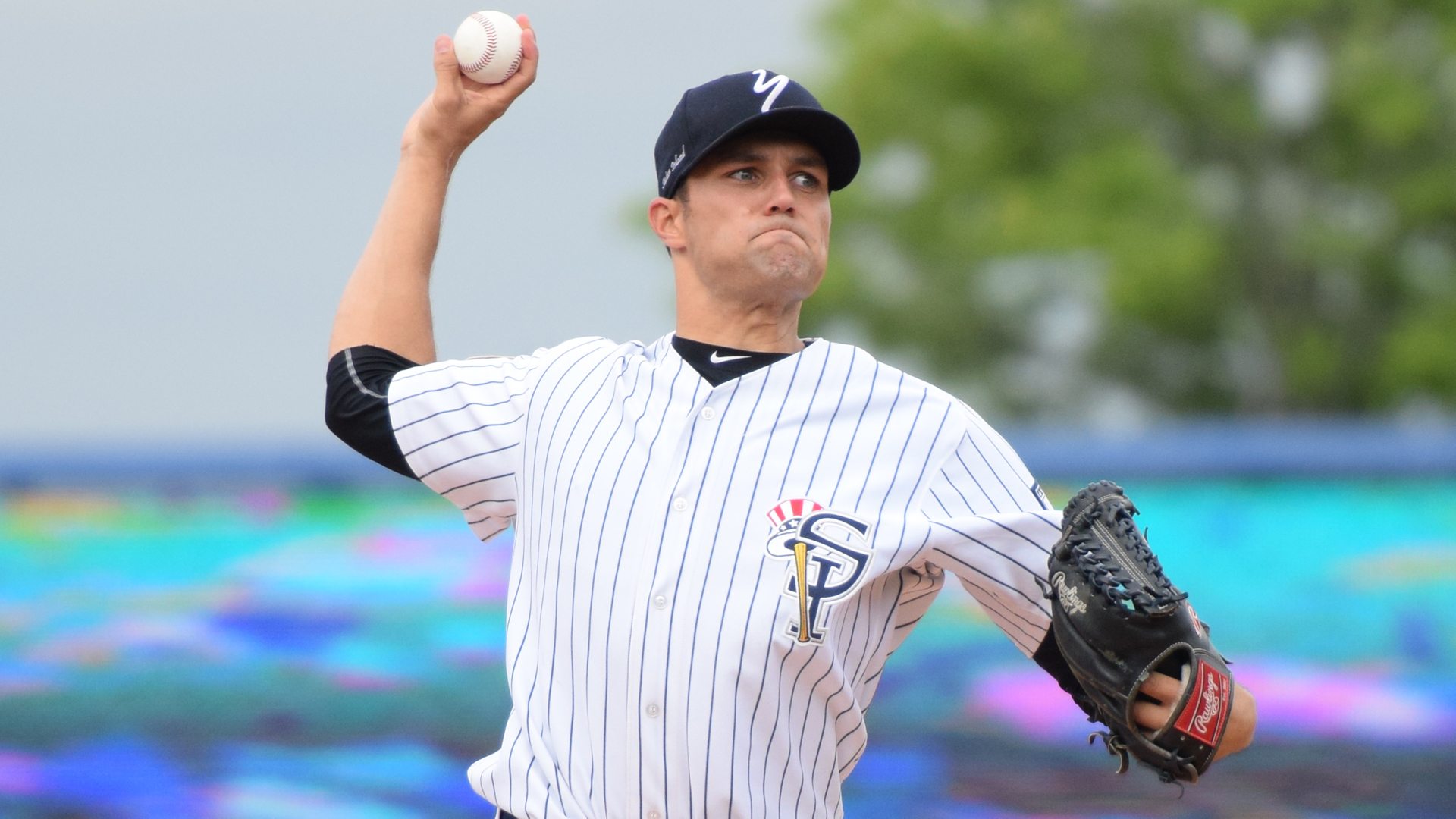 Kolton Mahoney will start the first game of the 2016 playoffs for the Staten Island Yankees (Robert M. Pimpsner)

For the eleventh time in their history, the Staten Island Yankees will be making an appearance in the New York – Penn League playoffs.  It is the third time that the Baby Bombers are heading to the postseason as the wild card.  But it will also be the final time they do so under the “Yankees” name.

On Wednesday, September 7 the Yankees will suit in their home pinstripes and take the field at the Richmond County Bank Ballpark to face off with the State College Spikes who ended the regular season with the best record in the league at 50-26.  Staten Island will send out one of their top starters in the person of Kolton Mahoney to make the start in game one.

Mahoney, 24, ended the regular season with a 4-4 record and a 2.92 ERA over 12 games, eight starts.  He struck out 47 batters over 61 2/3 innings and will be making his second career start in the postseason.  Last year he made one start for the Staten Island Yankees in the League Championship Series against the West Virginia Black Bears, in that game he allowed three runs over three innings on 62 pitches.

This year against the Spikes he did not allow a run in the two innings he pitched against them on August 12.  In that game, he allowed just one hit on 23 pitches.

On the mound for State College in game, one will be Bryan Dobzanski.  The 21-year old right-hander had a 4-6 record with a 3.93 ER with 37 strikeouts over 71 innings pitched.  Opponents hit .286 against him on the season.  The Yankees hit .333 against them in their lone game, scoring three runs on six hits.

Starting game two for the Staten Island Yankees will be Freicer Perez.  The right-handed pitcher has impressed many this year, reaching as high as #30 on the New York Yankees mid-season prospect ranking by MLB Pipeline.  The 20-year old has a 2-4 record for the Yankees in the regular season, earning a 4.47 ERA with 49 strikeouts over 52 1/3 innings pitched.  He has yet to face State College in a game.

If the series goes to a game three, the Baby Bombers will be starting Simon De la Rosa.  The 23-year old has started 13 games for the Yankees, striking out 76 batters in 69 1/3 innings and has a 3.38 ERA.  He faced the State College Spikes on August 12 where he allowed four runs on four hits and a walk over five innings.  Two of the four hits he allowed in that game were home runs.

For State College Carson Cross would get the ball in game three.  The 24-year old had a 5-6 record during the regular season with a 3.24 ERA and 53 strikeouts in 80 2/3 innings.  The Yankees faced him on August 14, where he took the loss allowing six runs, 3 earned, on seven hit over five innings.

The Spikes were fourth in the league at the plate, with a combined .254 batting average.  As a team they led the league in RBIs with 334, runs scored with 378, and walks with 283.

Catcher Jeremy Martinez leads State College all season with a .325 batting average in 57 games. 14 doubles, triples and one home run.  Against Staten Island he hit .429 in 7 at-bat but did not face any of the three starters the Yankees will send out in this series.  First baseman Ryan McCarvel and LF Vince Jackson each drove in 45 runs.

Staten Island, on the other hand, had a combined .239 team batting average.  They are the lightest hitting team in the playoffs.  The Yankees ended the season with 277 walks, good for fourth in the league.  They were lead to the play by Nick Solak who ended his first professional season with a .321 batting average, good for fourth in the league.   Outfielder Timmy Robinson leads the entire league with 52 RBIs.

The Staten Island Yankees have history against them going into this series.  They have yet to get out of the semi-finals when they enter the postseason as the wild card team.