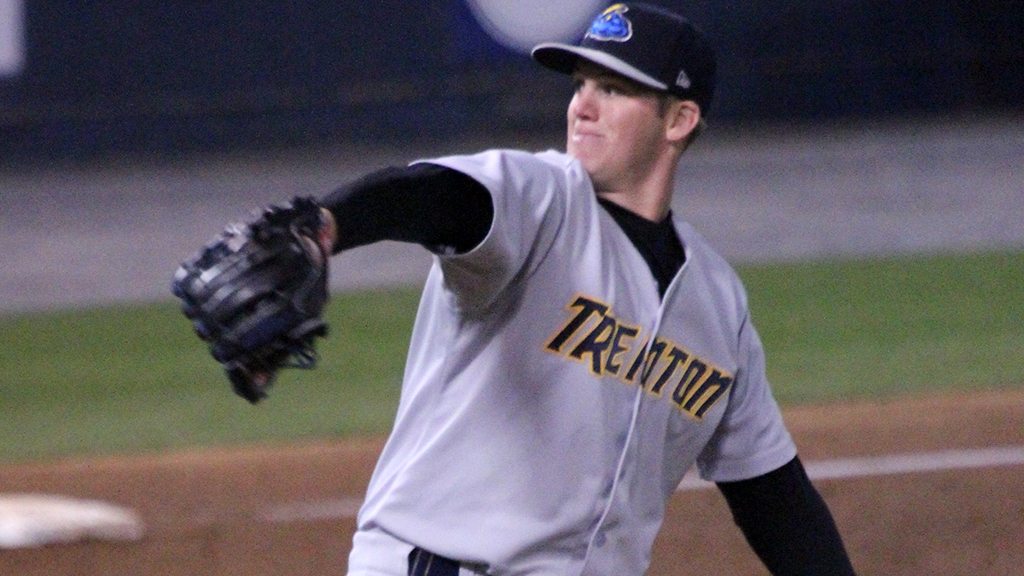 Aaron Dott with the Trenton Thunder in 2014 (Elijah J Christman)

There is no denying that the Yankees have a deep crop of major league ready lefty relievers. Players like Justin Wilson, Jacob Lindgren, Tyler Webb, and James Pazos are all in AA or above, and generally receive praise. However, person that gets forgotten when discussing major league ready lefties is Aaron Dott. Dott may not be as flashy as the other guys on the list or have their upside, but he has the type of numbers versus lefties that might warrant a major league career.

Dott’s story is pretty unique, as he wasn’t drafted by the team. He was actually drafted by the Tampa Bay Rays in the 31st round of the 2009 draft. He spent two seasons with the team, before getting cut by the team. Doott had to play in the independent league before getting a second chance at baseball. He played 11 innings in the Frontier League, before the Yankees came and signed him to a minor league deal.

Since signing with the club Dott has played pretty well, his highest FIP since joining the Yankees was 3.20. Dott K rate fell to 6—his lowest mark of his career—but he still did well in AA, and had a ground ball rate of ball in play was 68%. In 2013 his k rate was over 10% and his GB rate of BIP was 50.75%.Overall he has been good as a Yankee prospect, but his true value and future may be against left handed batters.

Last season Dott, held lefties to a .179 BA, and had a WHIP of .89 versus lefties. Righties hit .250 off of him and he only had a WHIP of 1.35 versus them. Of course last season was a small sample size for him, and he was a bit older than the league average, but it’s not like his success versus lefties is new. Over the past three seasons Dott has a 14 K/9 versus lefty batters.
Furthermore his overall success wasn’t simply built off of playing against younger non-prospects. He did very well against top-prospects. In 47 appearances against a group of MLB top-20 prospects, Dott held the group to a .267 BA, and struck them out 17% of the time.

Of course LOOGYs aren’t the most exciting prospects, but having a guy that can get lefties out is very important for a team that plays in the AL East. As Fangraphs writer Marc Hulet notes Dott is an intriguing Rule-5 draft candidate. Dott is the type of guy that can be drafted and actually stick with a team, because he just has to get one type of guy out. Considering the aforementioned fact about the Yankees lefties’ depth it would come as a big surprise if he is protected in the upcoming draft. With the said he is currently a Yankee, and is an intriguingly useful piece of relief depth.