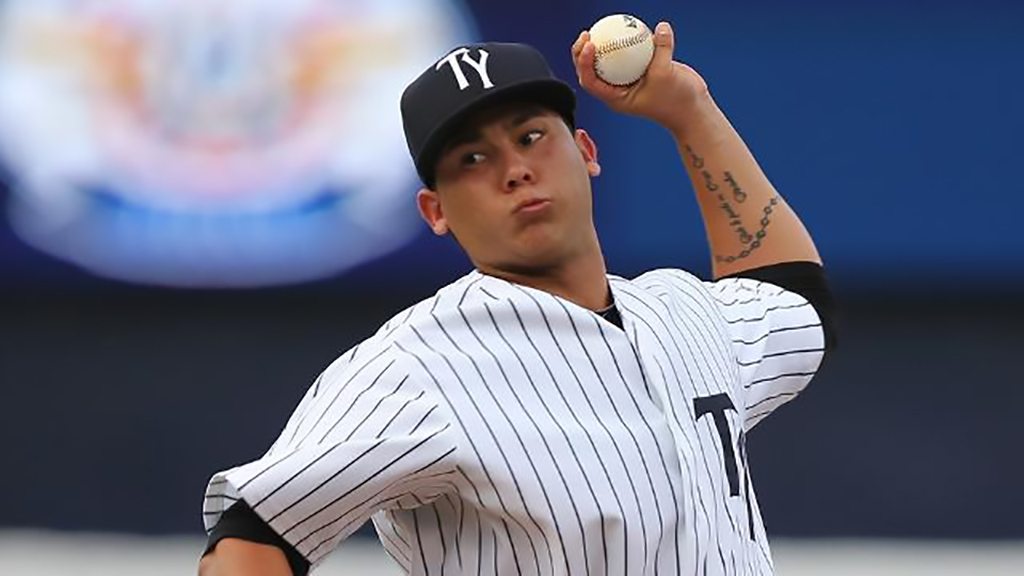 In general the 2015 Thunder have a very prospect-heavy team, in fact rated the eighth-most talented club in the minors according to Baseball America.

The roster features four of the system’s top 10 prospects (as rated by our site). However, other than Luis Severino, most of this team’s prospect depth comes either from the bullpen or from its position players. The rotation is filled with a lot of players who are regarded as non-prospects or organizational depth.

With that said,  players often play past their potentials, and can became more valuable than their scouting report would lead you to believe. Even if they don’t become stars, they can have value. For example, Vidal Nuno was probably thought of an organizational player for most of his development, yet he turned out to be a major-leaguer who actually helped the Yankees acquire a pitcher with a lot of talent.

I wouldn’t call Nuno a good pitcher, but at the end of the day he did help the Yankees despite his non-prospect status. That is why it’s still worthwhile to profile these starters, and look at how they are performing throughout their development.

With that in mind here is that the statistical profile of Friday’s opening-night Trenton Thunder starter Miguel Sulbaran.

Sulbaran was 17 when the Dodgers signed him out of Venezuela in 2011. Like most international signings, he began his career in the Domincan Summer League, where he put up very good numbers. He had an ERA of 2.81, a WHIP of 0.954, and a FIP of 2.76. His success would continue in the subsequent years.

He began the 2013 season in A-ball, pitching for both Great Lakes, and put up another strong campaign. He pitched 92.2 innings for the Dodgers with an ERA of 3.01, a FIP of 2.90, a WHIP of 1.252, a k/9 of 8.26, and a BB/9 of 2.62. Despite his success, he was traded to the Twins half-way through the season – finishing in a Cedar Rapids – for Drew Butera. This trade probably shows that the Dodgers never bought into Sulburan’s numbers.

However, Sulbaran’s success carried over to the Twins, system, where he pitched 20 innings with a 2.70 ERA and a FIP of 2.64. He would pitch one more inning as a Twin in 2014 before he was traded to the Yankees for infielder Eduardo Nunez and assigned to Class-A Advanced Tampa.

As a Yankees farmhand, Sulbaran continued his impressive minor-league resume. Despite being 3.2 years younger than the average prospect in the league, he still managed to put up an ERA of 3.52 and a FIP of 3.53.

Considering that he was traded for Butera and Nunez, we could probably say his results are misleading, but his stuff doesn’t seem to be mediocre. In 2013. MLB.com draft guru Jonathan Mayo wrote: “Sulbaran has a good feel for his low-90s fastball and can add and subtract velocity from it as needed. His curveball is his best offspeed pitch and both his slider and changeup show promise.”

At the time Mayo ranked Sulbaran as the Dodgers 13th best prospect. This however was the only time Sulbaran would be ranked so high. He has never ranked on any list by Baseball America, or any other prospect site. Considering he’s a lefty that throws 90+ MPH, that probably means his secondary pitches aren’t as advanced as they should be.