Stellar Effort From Sheffield Paces Thunder to Victory Over Reading 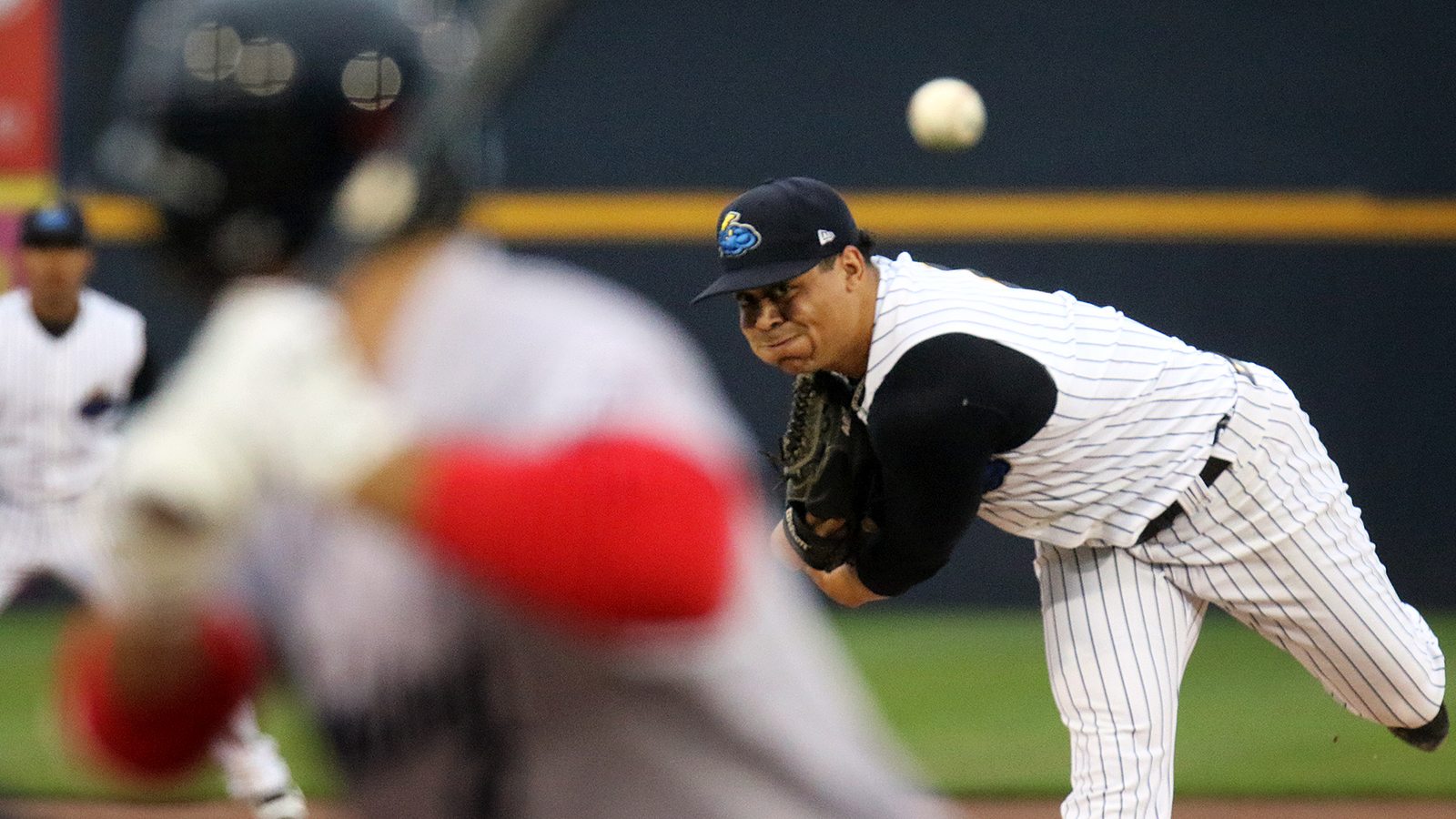 TRENTON – The Thunder spent the majority of last season chasing the Reading Fightin Phils for the top spot in the Eastern Division before finally overtaking them in the postseason to advance to the Eastern League championship. Clinging to a 1/2 game lead in the division, Trenton welcomed in their rival to ARM & HAMMER Park on Monday and took the opener of their four game series, 6-2. 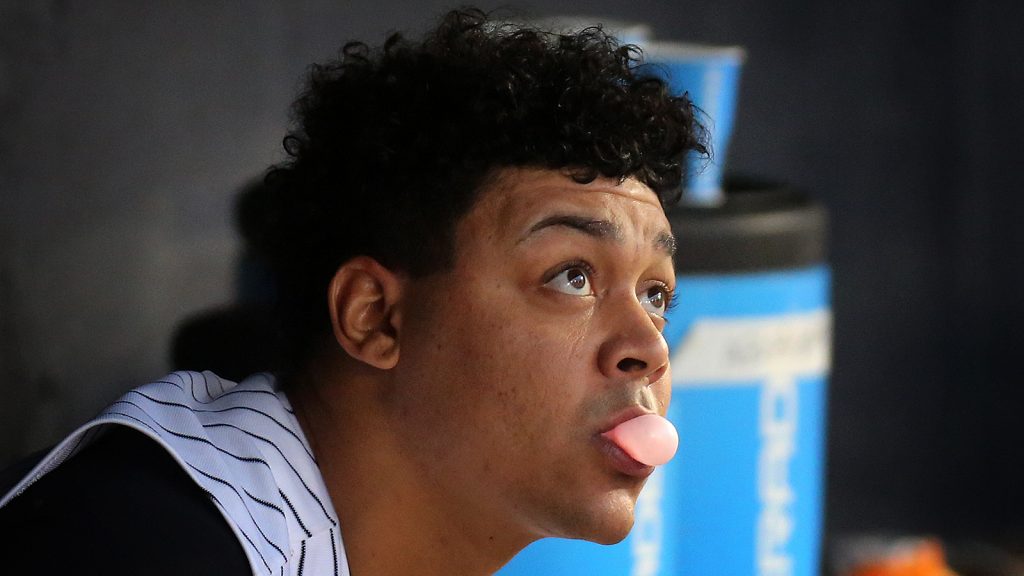 Trenton Thunder starting pitcher Justus Sheffield follows the path of a pop up while in the dugout against the Reading Fightin Phils in Trenton on Monday, May 22, 2017. (Martin Griff)

After allowing eight runs on 18 hits in his previous two starts, southpaw Justus Sheffield toed the rubber for Trenton and tossed a season-high 6 1/3 innings of one run ball to stifle a Phils team that came into the game leading the league in runs and home runs. Sheffield allowed just four hits and fanned four in his 94-pitch effort.

“It was his best outing of the year,” exclaimed Thunder Manager Bobby Mitchell. “He had the best stuff that he has had, even in the bullpen. It’s funny because it was the first time I’ve asked Rosie [Jose Rosado] about how a pitcher has looked in the bullpen, and he said that he looked fantastic and that it was his best bullpen before a game. He came out and he pitched like it.” 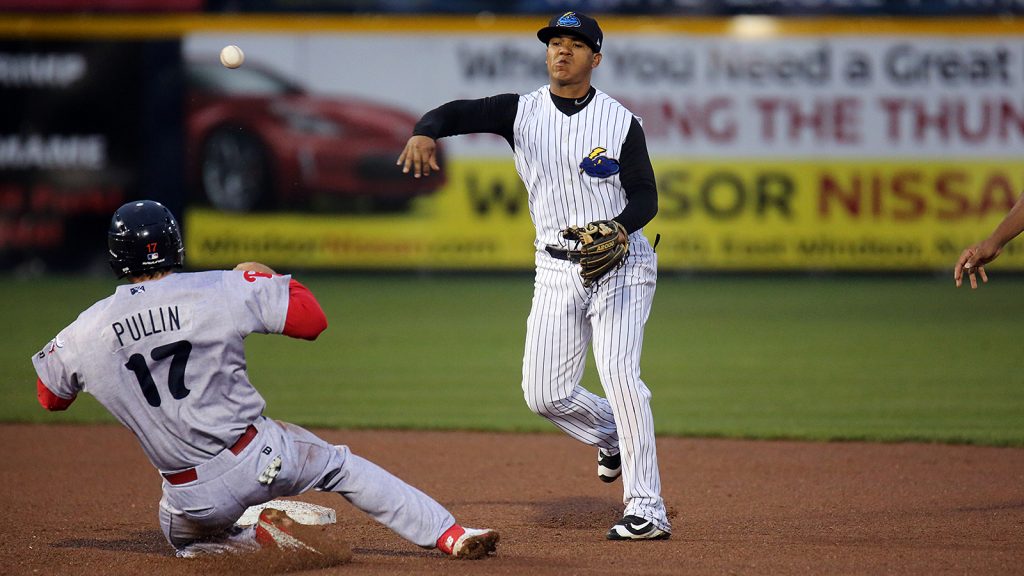 Trenton Thunder shortstop Thairo Estrada throws to first to compete a double play to end the top of fourth inning against the Reading Fightin Phils in Trenton on Monday, May 22, 2017. (Martin Griff)

Sheffield had struggled in recent starts with command and putting hitters away. The stat lines were just not playing up to the stuff. The 21-year old hurler has been working rigorously with Rosado to iron out the issues he has been battling.

“Me and Rosie, we’ve been working hard,” admitted Sheffield. “It’s kind of tough coming back from a couple of games when things aren’t going your way and you’re struggling out there on the mound. You kind of lose that feel of when you were doing well and I think that is what I went through. It was kind of a rough patch, but that is the thing about this game; you’ve got to keep working and I am obviously grateful to have Rosie as a pitching coach so that we could work through this and I just have to continue to build off of it.”

A one out single by rehabbing Tyler Austin followed by a well-struck double from designated hitter Jake Cave set up a sac-fly RBI from third baseman Miguel Andujar to give the Thunder an early 1-0 advantage. 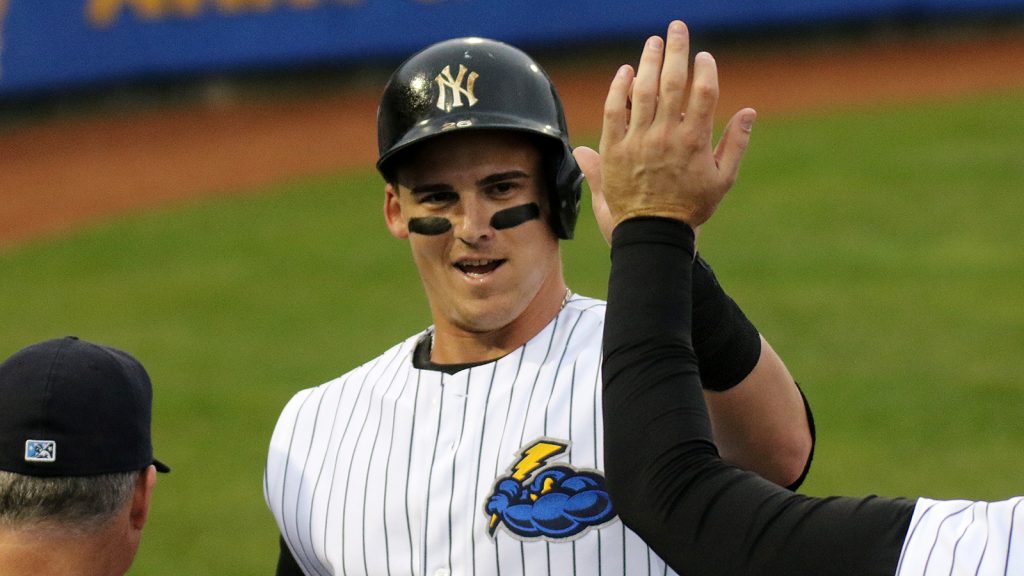 Trenton Thunder’s Tyler Austin returns to the dugout after scoring against the Reading Fightin Phils in Trenton on Monday, May 22, 2017. (Martin Griff)

Back-to-back singles from first baseman Billy Fleming and second baseman Abiatal Avelino paired with a walk by shortstop Thairo Estrada allowed Trenton to loaded the bases with nobody out in the fifth inning. Austin and Cave both grounded out to drive in a pair of runs before Andujar, who finished the night 3-for-3, smoked an RBI double to put the Thunder ahead 4-0.

Phils second baseman Scott Kingery blasted his league leading 14th homer of the season in the sixth inning and that was the lone blemish to Sheffield’s line.

Trenton would tack on two insurance runs with an RBI triple by Rashad Crawford and an RBI single by Fleming. Reliever Matt Wotherspoon nailed down the eight-out save to preserve the 6-2 win.