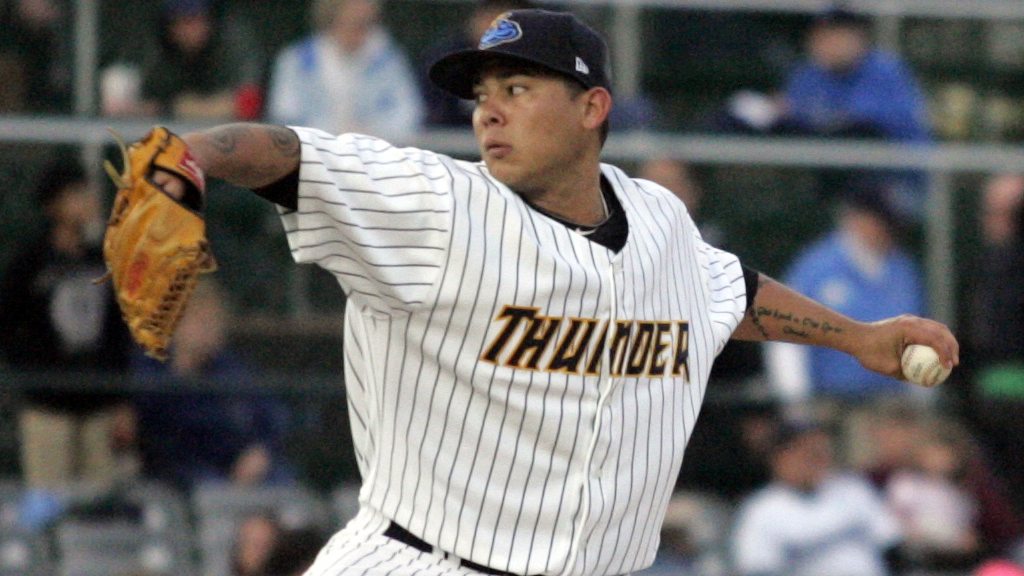 TRENTON, NJ – Just about 10 days ago, 24 hours after left-hander Miguel Sulbaran had tossed six scoreless innings against the Erie SeaWolves for the Double-A Trenton Thunder, it was a good time to chat with the native of Edo, Zulia, Venezuela.

A man with a smile, acquired from Minnesota for shortstop Eduardo Nunez at the beginning of the 2014 season, the 5-foot-10, 209-pound Sulbaran, has put together a consistent 4-1, 2.45 mark between Trenton and Scranton, to which he was promoted Saturday and started Sunday.

Sulbaran is not a guy who will overpower you – he was 4-5, 3,52 at Class-A Tampa in 2014 after pitching a single inning at Low-A Cedar Rapids in the Twins system – but seemed to get better as the year went on. He struck out 86 and walked just 30 and had a quite decent WHIP of 1.18.

So, for a prospect traded to the Yankees for a cast-off shortstop, matters, with what Sulbaran has shown so far in 2015, are proceeding well. He was not expected to reach Triple-A this season, let alone throw five scoreless innings in his International League debut.

“Miguel is pitching well” said Trenton piecing coach Jose Rosado. “He can’t be a thrower, He’s not really going to overpower you.”

Sulbaran agreed with that analysis.

“I have to hit my spots, I can spot my fastball (sitting between 90-92 mph). I also have to put my curve and slider where  I need to.”

Keys to Sulbaran’s ascent this season are better focus and both his slider and curve have moved to the above-averaage area. His control was always exceptional, and he has always had a good strikeout/walk ratio. He is a pitcher with a plan.

“I concentrate on every hitter I face, one at a time,” he said. “I have to think out there, and of what I have to do with my pitches and throw strikes. If I can do that, I usually can keep things under control.

“Throwing strikes is certainly important for me.”

Overall, Sulbaran has given up just 11 earned runs in 40.1 innings. There are those who are not all that surprised he has been effective by pinpointing his curve and slider and spotting his fastball, which looks quicker after he has painted the corners with his rather impressive off-speed stuff.

Curiously, Sulbaran has been traded twice. In addition to coming to the Yankees for Nunez in 2014, he was traded by the Dodgers, with whom he signed in 2011, to the Twins to complete the acquisition of outfielder Drew Butera in 2013. Dodgers observers were not pleased with that turn of events.

“I’m just happy I’m getting a chance in the Yankees system,” said Sulbaran, who just turned 21 March 19 and is one of the youngest pitchers in the International League at the moment.

So, for a player the Yankees seemed anxious to deal, Sulbaran is turning into an excellent return.

His promotion to Triple-A Scranton was tied to the one-day call-up of Bryan Mitchell to the Yankees. With Mitchell quickly returned to the RailRiders, Sulbaran could end up back in Trenton.

On the other hand, five scoreless innings at Durham in his Triple-A debut nay be enough to keep Sulbaran with Scranton for at least a bit.

Either way, he’s in a good spot.