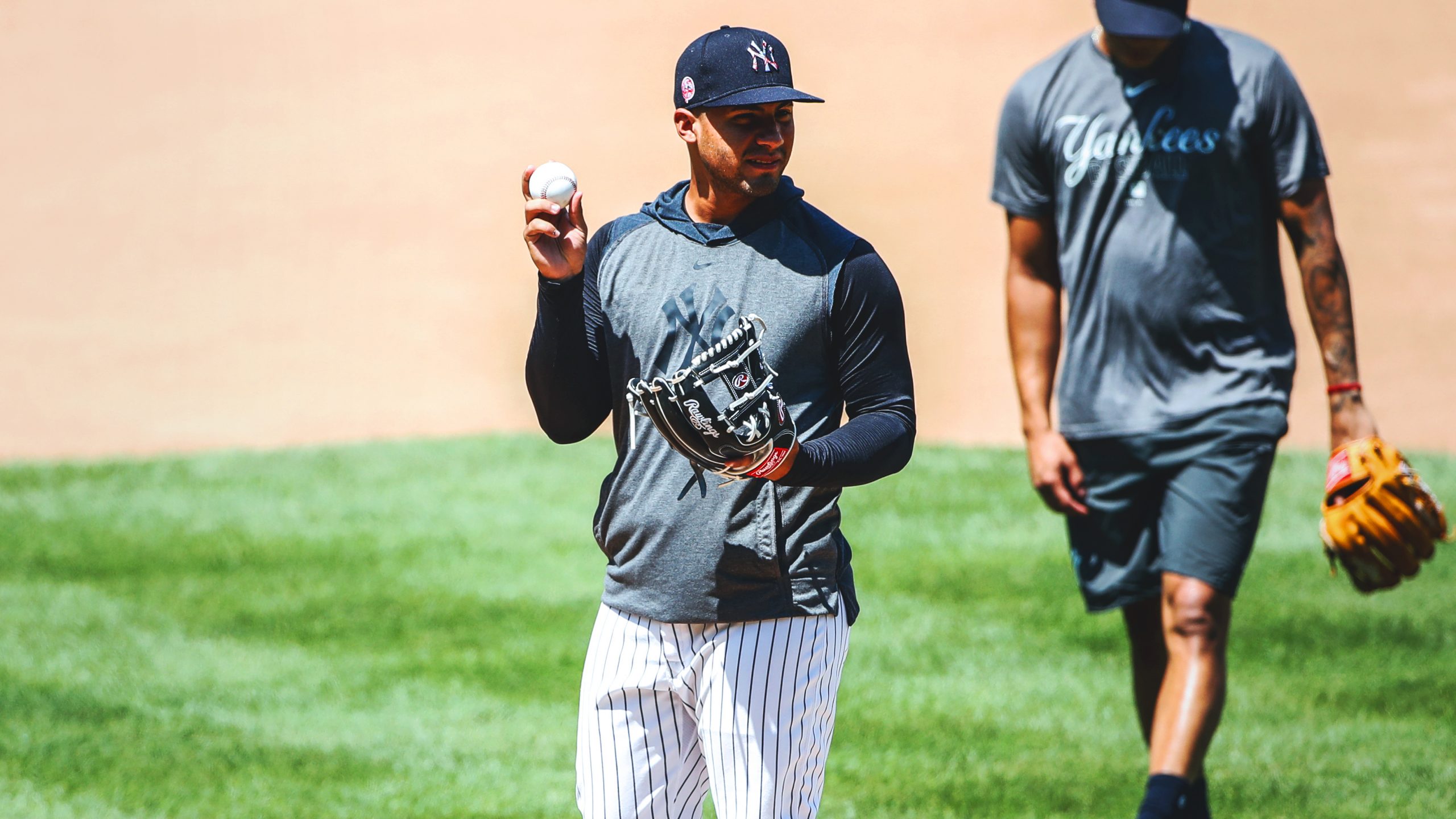 Boone started his press conference with an update on Aaron Judge, who was once again absent from practice Monday with a stiff neck. Boone stated that Judge was feeling better today and was back to working out in the weight room and also took some swings in the cages. He was continuing to receive treatment Monday. Judge had more range of motion and less pain in his neck when turning side to side. His status is still to be determined for Tuesday’s intrasquad game, however, he had a pretty good day overall on Monday.

When questioned about Judge’s patterns with injuries, Boone was quick to reassure the media that he’s smart about how he takes care of himself and that the rib, oblique, and now this neck were all from fluky situations or plays. Boone is comfortable with how Judge works and the effort he puts into making sure he takes care of himself. Boone feels that down the line, overcoming these small setbacks will prove that Judge is a very durable player.

Members of the media also questioned if the size of Judge and Stanton can have to do with some of their injuries. Boone did state that it is something that could be questioned or speculated as to why someone’s ‘breaking down,’ or getting injured. Depending on the injury, it is a talking point that tends to come up on occasion. 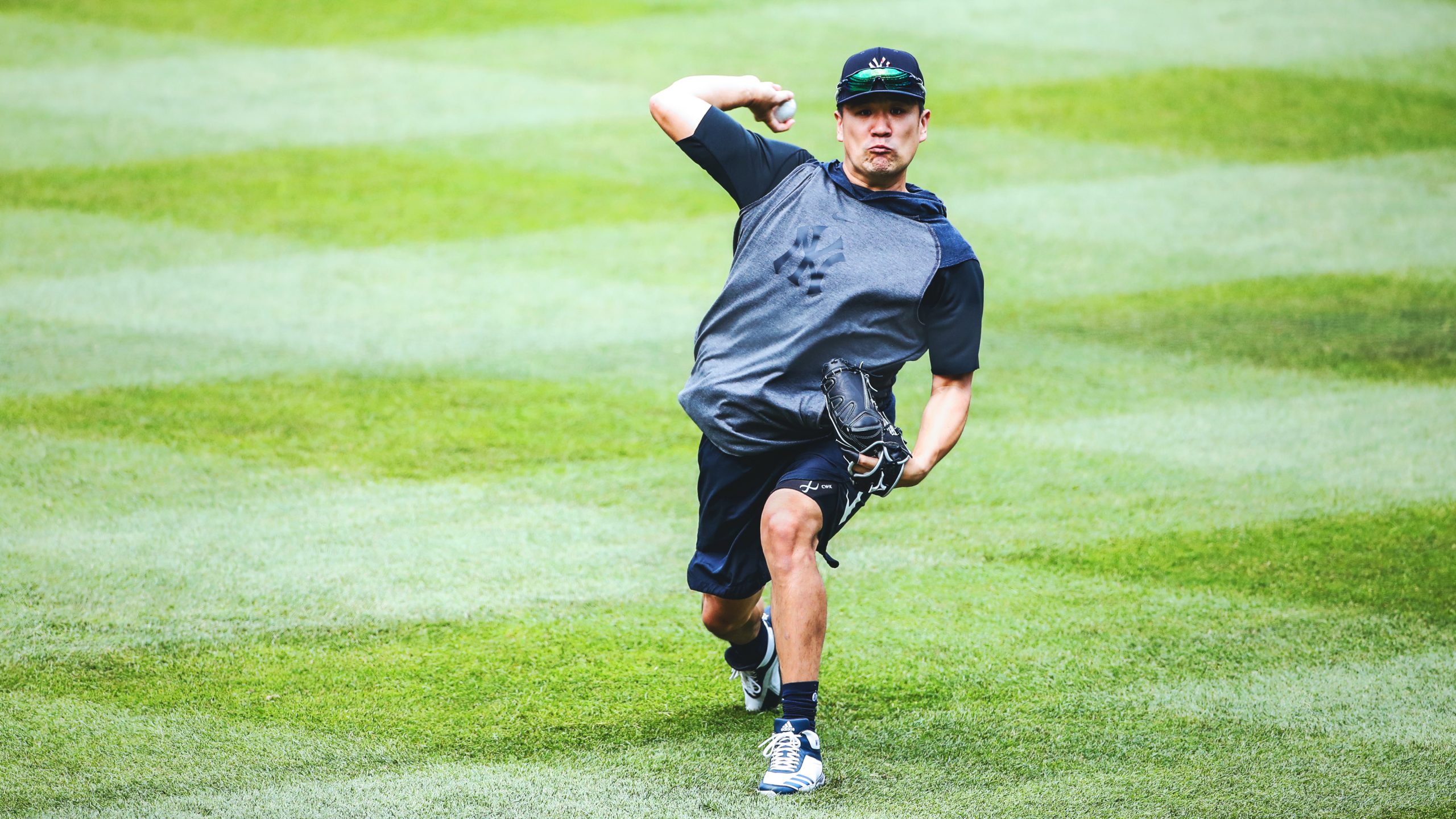 Boone also gave an update on Monday on Masahiro Tanaka, stating that he’s doing well and ramped up more today. He was out throwing more today and worked out his lower body as well. Boone stated that Tanaka is continuing to respond well to working out as the workload increases. His workload will continue to increase as long as he continues to respond well.

When asked if Tanaka has enough time to be ready for the opener, Boone stated that he’s not going to be built up very much and that they are continuing to take it a step at a time with Tanaka. His next step will be getting on the mound and seeing how he responds and faces hitters. With an extended roster there’s more flexibility if the Yankees have to creatively build him up at some point.

As far as DJ LeMahieu and Luis Cessa, who have both yet to report to camp due to testing positive for COVID-19, there is no update.

Boone was asked about the Yankees getting off to a quick start and finding themselves in a 60-game season. Boone reiterated as he has all summer thus far that every game is going to be important. “We’re trying to be the best team we can be every day, in practice and games,” stated Boone. In a 60-game season, hopefully it’ll be a year where we play into playoffs,” stated Boone.

Members of the media also brought up the point of staying focused throughout playing in a pandemic. Boone stated that is something he has to think of, but hopes can be a strength of his players and staff in staying focused. Boone stated that two things have a chance to be separators this season, and this is how teams handle going through the protocols every day, who stays on top of that and handles that the best, there’s a competitive advantage to be gained there, according to Boone, who also stated that playing with no fans in the stands and finding that gear and energy in a situation you’re not used to is also key in gaining a competitive advantage.

Boone also spoke on the many top prospects the Yankees have at camp and getting their minor leaguers development this year. He stated that it’s a challenge that every team is facing and that the player development group has done a really good job during quarantine and now in being creative to help the younger players still make small improvements. Playing in camp now is no substitute for missing out a season, and Boone stated that it’s a tough time for those players. Boone stated that helping the younger players get a little better in this big league environment will help them and the organization gain competitive advantage this season and in the future. 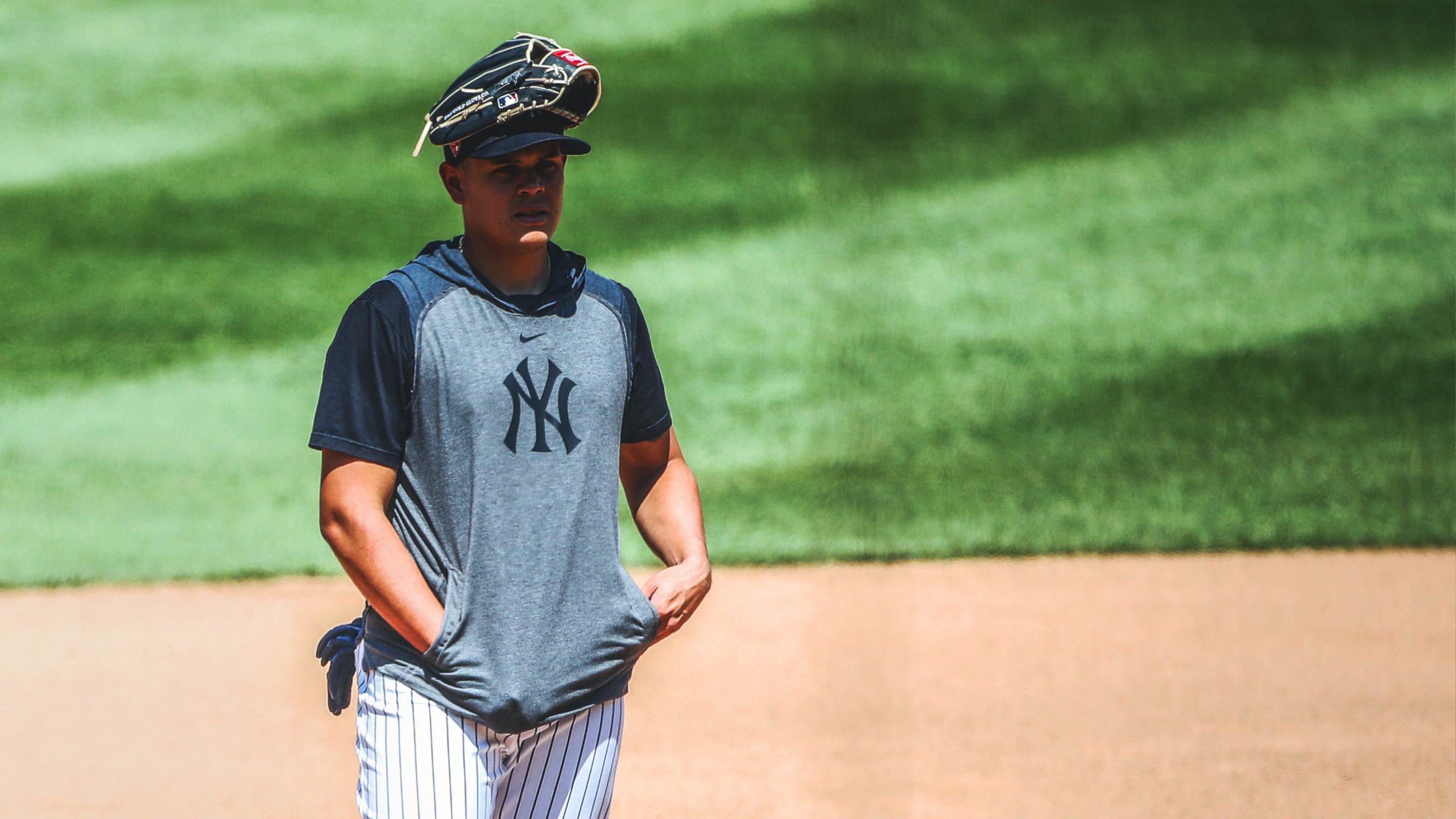 Gio Urshela also met with the media again Monday afternoon, stating he’s trying to be ready every day and is feeling good after the first few intrasquad matchups. Urshela stated that’s working on his timing and that with a couple more intrasquad games and exhibition games coming up, that he’ll be ready to go for opening day.

As a whole, Urshela stated that the Yankees are in a good place with the season coming up soon. “I feel like we’re working pretty hard to be ready for the season,” stated Urshela. “Everyone’s putting in the work. We’re going to have a good season.” Urshela also said that he’s excited to be facing opposing pitchers this weekend for exhibition games as it can be weird hitting off your own pitchers. But it has helped the players get ready for the season.

With DJ LeMahieu possibly not going to be ready for the 2020 season opener, it is likely Tyler Wade could be the Yankees’ second baseman. Urshela stated that the Yankees have good players here and that he feels comfortable with Wade and his other teammates.

When asked about preparing for 60 games opposed to a full season, Urshela stated that the team needs to be ready to go all out from day one that working off a machine and putting in the work every day and seeing pitches every day is preparing the guys for the 2020 season. 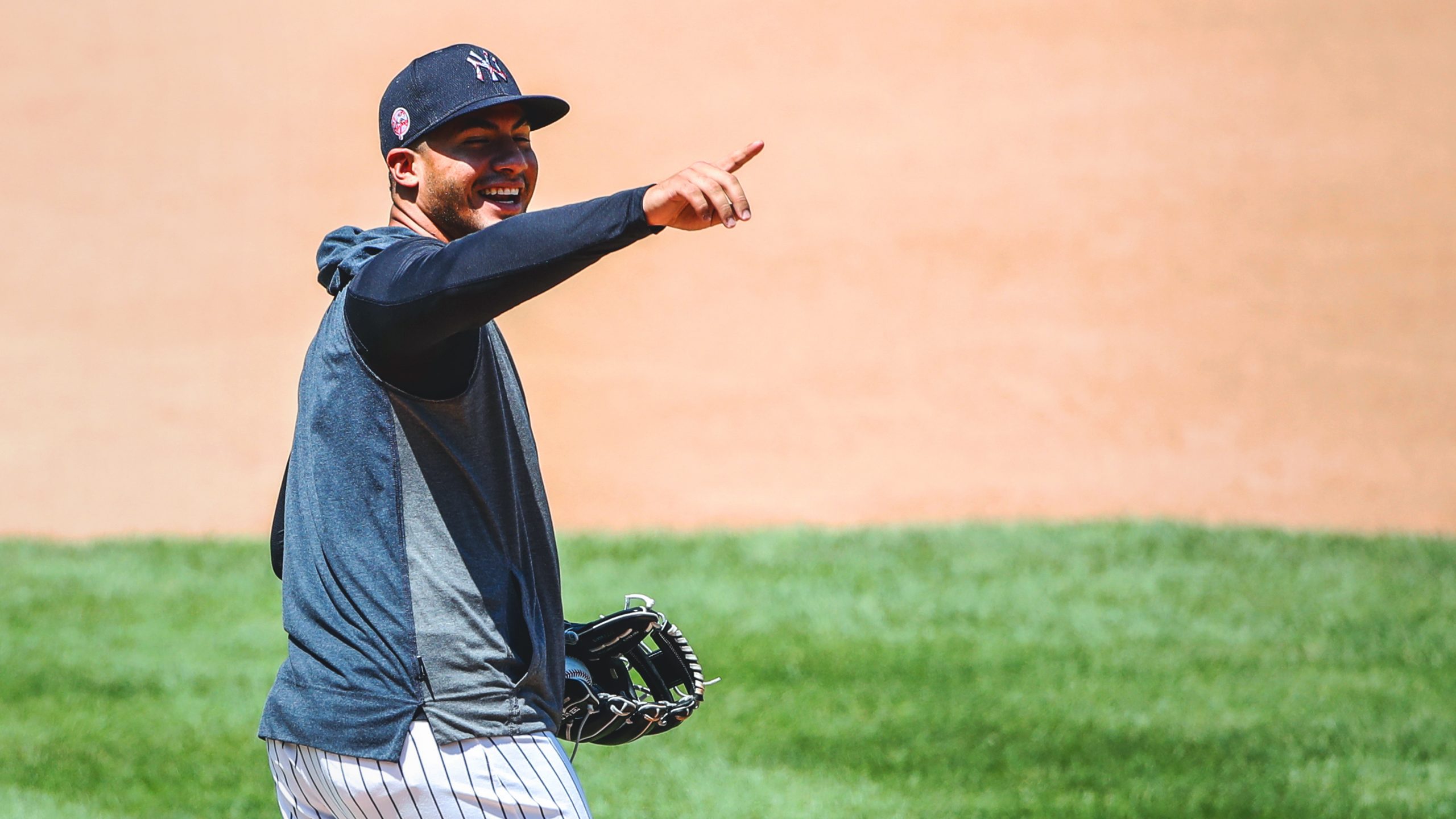 Gleyber Torres also took time to speak with the media Monday afternoon, stating that he feels really good since playing a few intrasquad games and that with each at bat he is trying to be ready. He stated while he doesn’t feel as comfortable facing his own teammates at the plate, he’s doing what he can to prepare for the season. Torres stated that he has been impressed with all of the Yankees’ pitchers, stating that they all have really good stuff and the pitchers have a really good command. “Clarke was impressive,” stated Torres. “I feel confident and comfortable with all my pitchers, they’re doing a really good job right now,” stated Torres.

Torres stated he is excited for this weekend’s exhibition games and that it will be fun to face different teams that the Yankees will play in the regular season. Gleyber stated it will help the team continue to prepare for the season and teams they will face.

One of the teams the Yankees will see within the next week during exhibition play, will be the Philadelphia Phillies, which is now home to the Yankees’ former player and manager, Joe Girardi, as well as DiDi Gregorious. When asked what it will be like to see those guys again, Torres stated that it will be fun. “DiDi has really good energy,” stated Torres. But while it’s fun and games outside of game-time, Torres stated that once the game starts it’s about focusing and trying to win the series. All the guys have a really good relationship with Gregorious, but Torres stated that once they’re on the field, you forget the relationship and do your job.

When asked about the team’s mindset since March and having motivation from exiting the playoffs sooner than they wanted last season, Torres stated that while last year’s loss is in the past, the Yankees are focused on this short season and are hungry and have a mission to win it all. “We’re preparing now to get there,” stated Torres.

Gleyber Torres was also asked about DJ LeMahieu possibly not being ready and Tyler Wade possibly stepping in. Torres stated that he is 100 percent comfortable with Wade, having played with him in the minor leagues and having a really good communication with Wade. “We’ve kind of grown up together,” stated Torres. “We feel really comfortable and during the practices, we talk a lot about game situations and being ready for those situations,” stated Torres who stated he will play really well with Wade. 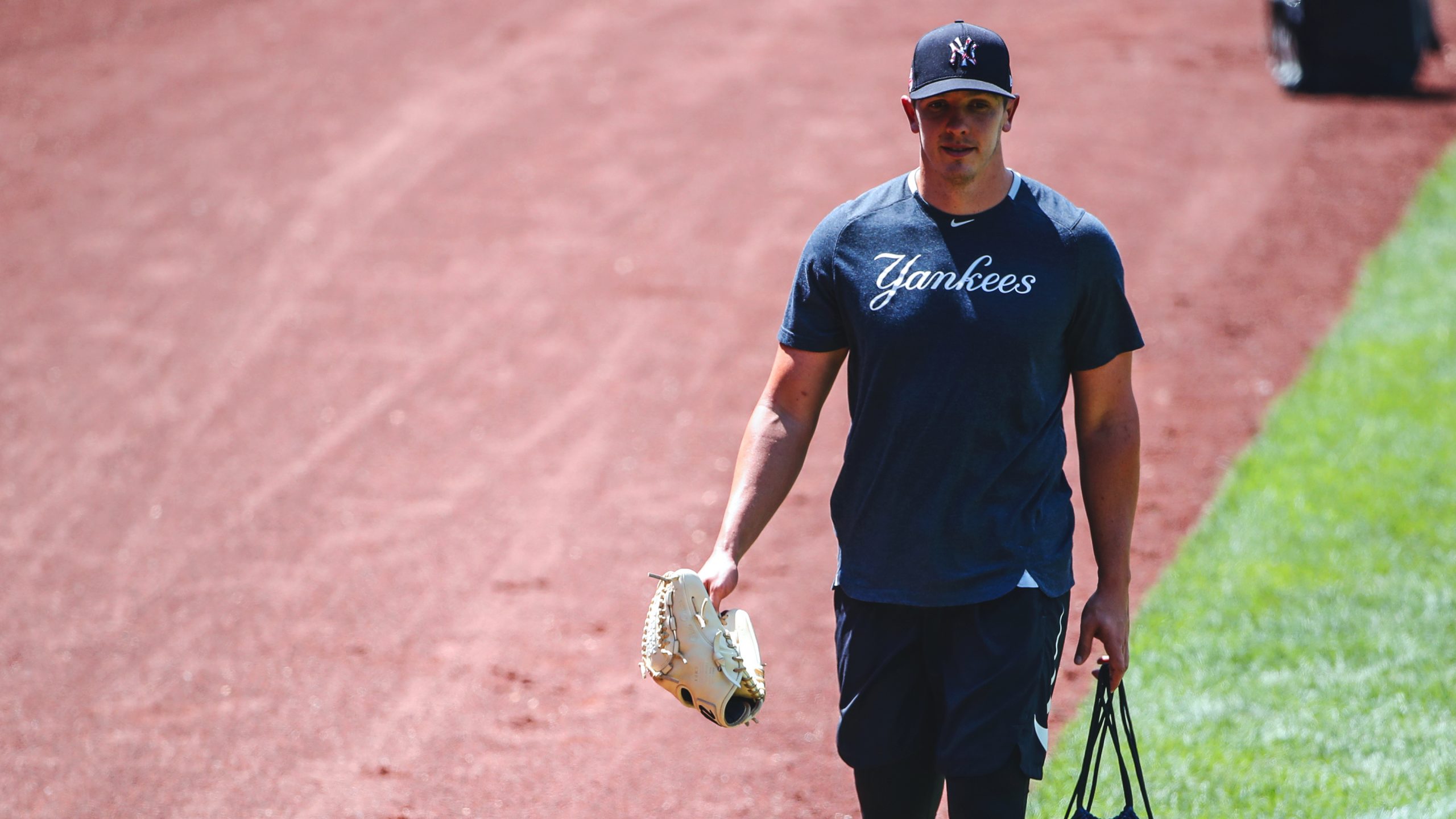 The Yankees will play intrasquad games on Tuesday and Wednesday evenings at 5:15 PM. LHP, Jordan Montgomery and RHP, Chad Greene will be the pitchers for Tuesday night.

Gerrit Cole will take the mound again on Friday night during an intrasquad matchup. Boone will use his 6th day of rest schedule ahead of July 23rd’s opening day matchup in Washington.