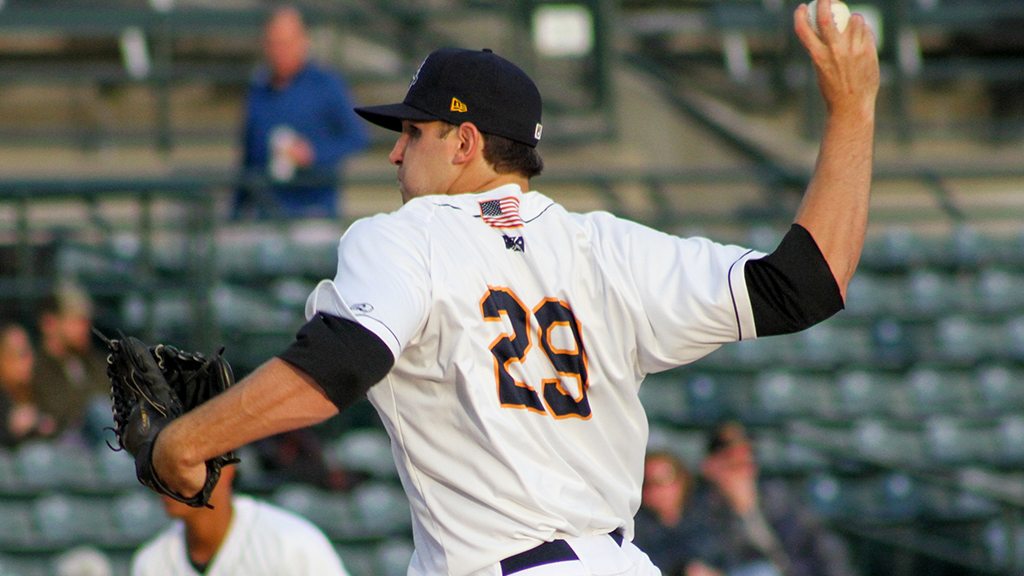 Brody Koerner was superb for the RiverDogs (Jerry Coli)

LAKEWOOD, NJ – The New York Yankees have announced that LHP James Reeves and RHP Brody Koerner have been called up to High-A Tampa from Class A Charleston. In two corresponding moves, the Yankees have recalled RHP Jose Mesa from Tampa and have called up RHP Yefrey Ramirez from Extended Spring Training.

The former Citadel standout and Summerville, SC native, Reeves, along with former Clemson Tiger Koerner will not join the RiverDogs on their upcoming road trip and begin their assignments in the Florida State League immediately.

A former Ashley Ridge High School product, Reeves had his return to The Joe cut short after impressing in his four relief appearances for Charleston. The lefty went 1-1 with a 2.70 ERA over 10 innings of work, yielding just two hits, three earned runs, and three walks while striking out 15 batters. Opponents hit a measly .065 off Reeves during his stint with the RiverDogs.

The 2015 Southern Conference Pitcher of the Year and 10th round pick by the Yankees made his pro debut in Staten Island last season where he accumulated a 1-1 record with a 3.08 ERA in 26.1 innings in relief. As a senior at The Citadel, Reeves ranked first in the Southern Conference in strikeouts (115), averaging nearly 11 K’s per nine innings, good for 19th in the NCAA. Other highlights for Reeves as a member of the Bulldogs included tossing the sixth no-hitter in school history on March 21, 2015 against Mercer at Riley Park.

Koerner, the Yankees 17th round selection in 2015 after his junior year at Clemson, logged three solid outings as a member of the RiverDogs in his first pro season as a starter to earn the call up to Tampa. Over three starts with Charleston, the righty posted a 1-0 record with a 1.74 ERA while striking out 21 over 20.2 innings. Known for his sinker ball and command of the strike zone with all four of his pitches, Koerner proved his worth as a starter issuing just three walks while posting a 0.75 WHIP, a mark that ranks third best in the league among qualifying pitchers.

Koerner began the season with the RiverDogs after finishing the 2015 season in eight games as a closer to conclude his pro debut. The Winchester, VA native went 3-1 with a 1.23 ERA and eight saves while logging 29.1 innings split between rookie ball Pulaski and Charleston in 2015.

Mesa joins the RiverDogs staff after beginning the season in Tampa where he logged one scoreless inning of relief while issuing one walk on April 22 against Daytona. The former 24th round pick by the Yankees in 2012 out of Miramar, FL spent last season in the Gulf Coast League, Short Season Staten Island, and Charleston, compiling a 4-0 record with a 2.23 ERA in 19 relief appearances while striking out an impressive 60 batters in 40.1 innings. Mesa is the son of the former two-time Cleveland Indians All-Star closer of the same name.

Ramirez gets the call up from Extended Spring Training after being claimed on waivers by New York from the Missoula Ospreys in the Diamondbacks system last December. Originally signed as an 18-year old out of Santo Domingo, Dominican Republic by the Diamondbacks as a position player in 2011, Ramirez spent the last four seasons as an Arizona farmhand, accruing a 13-14 record with a 3.78 ERA in 58 minor league games at the rookie ball level. Across 221.1 career innings, the righty has racked up 206 Ks to 65 walks.

With the retooled roster, the RiverDogs begin their second road trip of the season and face the Lakewood BlueClaws, the Class A affiliate of the Philadelphia Phillies, from April 26-28 and the Delmarva Shorebirds, the Baltimore Orioles’ SAL club, from April 29-May 2.

Fans can tune into WTMA 1250 AM in the tri-county area as well as online at riverdogs.com. Ticket information for any of the RiverDogs remaining home games this season may be secured by contacting the box office at (843)577-DOGS (3647) or online at www.riverdogs.com.