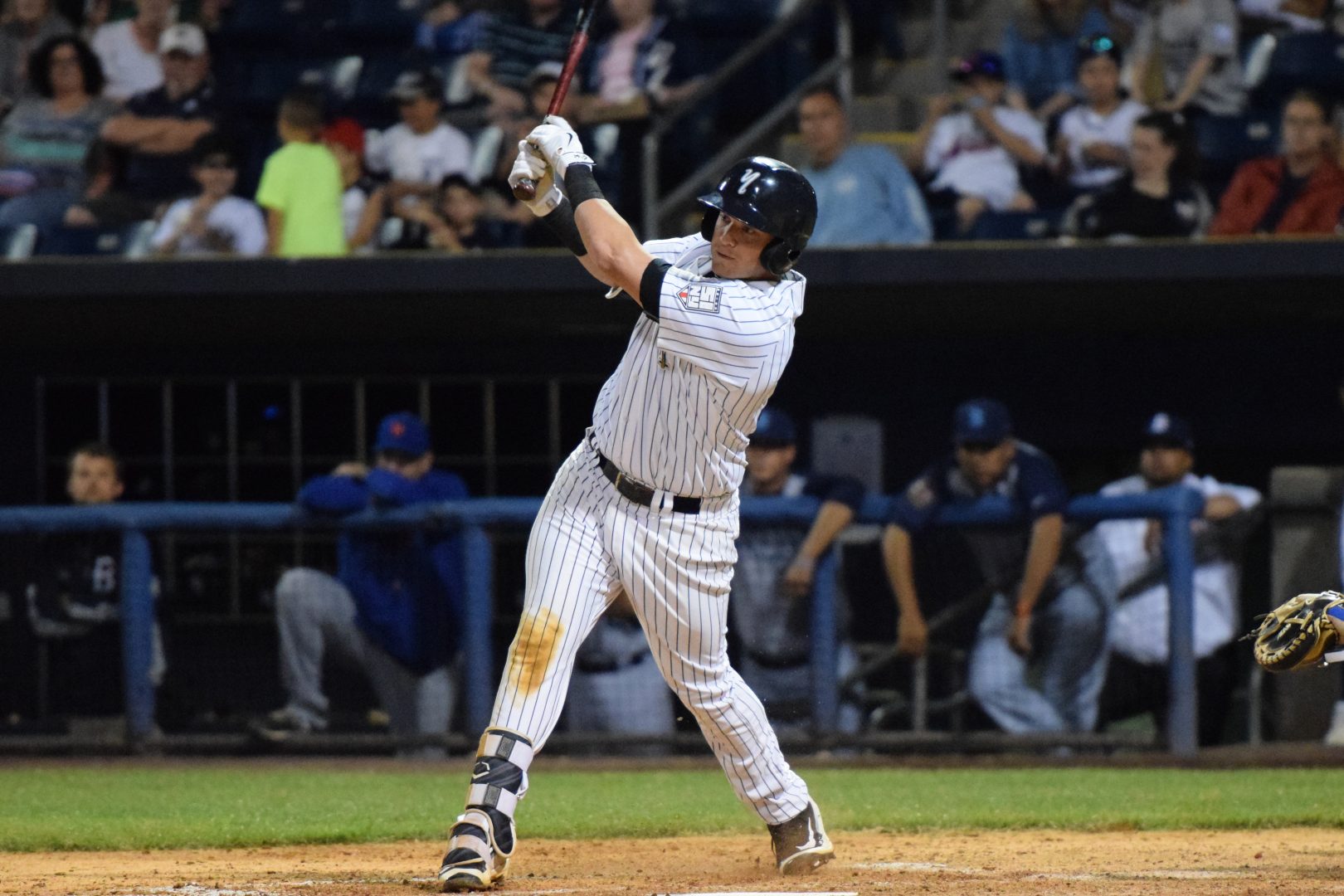 Staten Island Yankees first baseman Kane Sweeney with the walk off base hit to give the Baby Bombers the victory in a 10-inning no-hitter. (Robert M. Pimpsner/RMP Sports Media, Inc.)

CHARLESTON, SC – The New York Yankees have announced that first baseman Kane Sweeney has been called up to Class A Charleston.

Sweeney, 23, began the year in Short Season Staten Island where he hit .278/.422/.347 with three doubles and nine RBIs in 20 games with the Baby Bombers before garnering promotion and will make his full season Single-A debut on Thursday afternoon.

In a corresponding move first baseman Chris Gittens was placed on the 7-day disabled list.

Originally drafted by the Yankees in the 29th round out of Morehead State University in 2015, Sweeney began his career with the Pulaski Yankees in 2015 where he had one of the best seasons of any hitter in the rookie-ball Appalachian League. The lefty slugger hit an impressive .320/.437/.562 with six home runs and 37 RBIs in 45 games to finish second in the Appalachian League in OPS (.999). The Millstadt, Illinois native reached base safely in 40 of 45 games and showed impressive plate discipline with a 16 percent walk rate. He finished ranking second in the league in on-base percentage and slugging and finished fourth in batting average. After batting .417 (5-for-12) with two homers and 4 RBI in four games, he was named the APPY League Player of the Week for the week of July 13-19.

Prior to beginning his professional career, Sweeney spent four seasons at Morehead State where he hit .332 with a .450 on-base percentage with 50 doubles and 30 homers in206 games with the Eagles in his career. The 6’3” lefty slugger had a monster season his senior year in 2015, posting a .353/.482/.626 line while mashing 15 homers in 59 games and drawing more walks than strikeouts (53:48) and led one of the top offensive teams in the country to their first NCAA Tournament appearance since 1983. In2015, Sweeney was tied-7th in the country in walks (53) and was one of just 33 players in all of college baseball to hit at least 15 homers.

Sweeney joins the RiverDogs (50-37, 8-10) as they continue a weeklong homestand at The Joe with a three game series against the Rome Braves from July 12-14 and four game tilt with the Lakewood BlueClaws, the Class A affiliate of the Philadelphia Phillies, from July 15-18.

Ticket information for the RiverDogs homestand and any of the remaining home games can be secured by contacting the box office at (843) 577-DOGS (3647) or online at www.riverdogs.com.  RiverDogs playoff tickets for game two of the SAL Divisional Series on Friday, September 9 are now available. Those that can’t make it to the park can follow every pitch of the RiverDogs season on WTMA 1250 AM and streaming online at riverdogs.com.