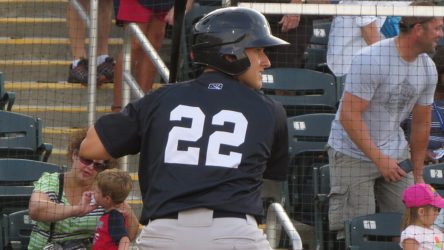 After falling to the Charlotte Stone Crabs 4-1 on Friday night at Charlotte Sports Park, the Tampa Yankees were back on Saturday night and once again, there just wasn’t enough offense to get the victory as they fell 7-2.

The Stone Crabs took an early 1-0 lead in the bottom of the second. In the top of the third the T-Yanks were able to take a 2-1 lead. The Yanks were able to get on the board with back to back singles by Vincente Conde and Derek Toadvine. A RBI single by Mark Payton tied the game as well as put runners on the corners. The Yankees took the 2-1 win with a sac fly by Tyler Wade to send home Toadvine.

In the bottom of the sixth Angel Rincon (ERA 4.97) lost his way as he allowed five hits and five runs by the Stone Crabs; striking out just one batter. Philip Walby then relieved Rincon in the sixth and then the entire seventh allowing one more run in the sixth inning for a 7-2 ballgame. Jonny Drozd (ERA 1.42) pitched an eighth inning of just one hit allowed.

Rincon was charged with the loss (0-4) as Charlotte’s Buddy Borden (ERA 1.88) earned the win (5-1) after his five scoreless innings of work.

The Tampa Yankees had eleven hits on the night.

The Tampa Yankees will complete the four game series against the Charlotte Stone Crabs at Charlotte Sports Park early on Sunday at 11:00pm. They will then head back home and have an off day on Monday for Memorial Day before starting a four game homestand against the Palm Beach Cardinals on Tuesday night.