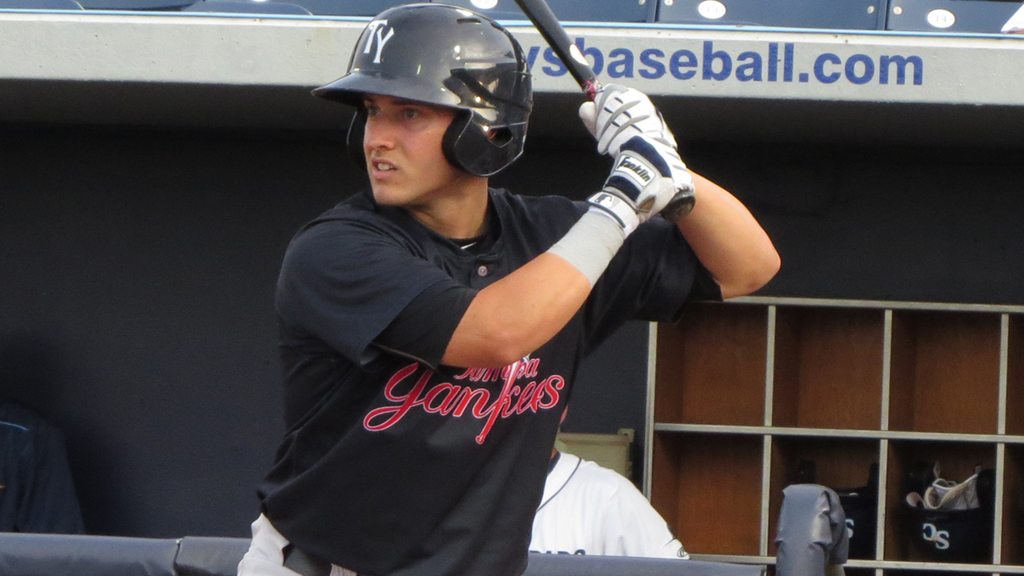 After the Tampa Yankees won the first game of a three game series against the Dunedin Jays they looked to take the series early Wednesday night. After a long 19-run game the night before, Gabriel Encinas took the mound as the Yankees’ starting pitcher.

Encinas ran into some trouble in the first inning loading the bases after a short chopper up the middle and two walks. He would get Ryan McBroom to ground to third, but with a dropped ball at second the run would score from third with the Yankees getting no one out on the play. He would draw another ground-out which Jorge Mateo would play cleanly to get for the first out in the inning. The Jays would still score though making it 2-0. After another walk the bases were loaded again, but with the help of a grounder and pop-out Encinas would get out of the inning giving up two runs and three walks.

Just as the night before, the Yankees had their go early in the game as well. After Jorge Mateo walked and Abiatal Avelino singled. The Jays would attempt a pick-off at first, catching Avelino in a run-down, but the Jays would lose track of Mateo allowing him to score on the play. Avelino would escape the rundown, being called safe at second before advancing to third on a wild pitch. Billy Fleming then would ground out to third to drive in Avelino and tie the game at 2 runs each.

Encinas continued to struggle with his pitch location in the second inning walking the first two batters he faced. With 2-men on base, Dunedin would attempt a double steal, unfortunately for the Yankees  Wes Wilson floated the ball into center letting another run come in while also giving the Yankees two errors in the first two innings. After 6 walks Encinas left the game, with Eric Ruth replacing him on the mound. Encinas went just 1 2/3 innings walking 6 batters, allowing 1 hit and giving up 3 earned runs.

The Jays would get to Eric Ruth as well come the third inning. After 2 hits to left-field, the Jays put together a 3-run inning extending their lead over Tampa to 6-2. As for the Yankees their bats stayed quiet until the sixth inning when Mark Payton hit a solo-home run to left field. After the Jays scored a run in the fifth this would make it a 7-3 game after six innings.

The Tampa Yankees added a run in the ninth inning, but that’s all they managed to do as they went on to drop the game to Dunedin by the score of 8-4. Gabriel Encinas took his second loss of the season giving up three earned runs and walking 6 in 1 2/3 innings of work. Eric Ruth pitched 3 1/3 innings and gave up 4 earned runs while striking out 4. Matt Marsh pitched 2 innings without allowing a hit. In seven innings this season Marsh has only allowed 1 hit and has not allowed a runner to score.

Thursday the Tampa Yankees play the rubber match of the series against the Dunedin Jays with 2015 first-round draft-pick James Kaprielian taking the mound. In his last appearance against Charlotte he gave up one hit in seven innings.