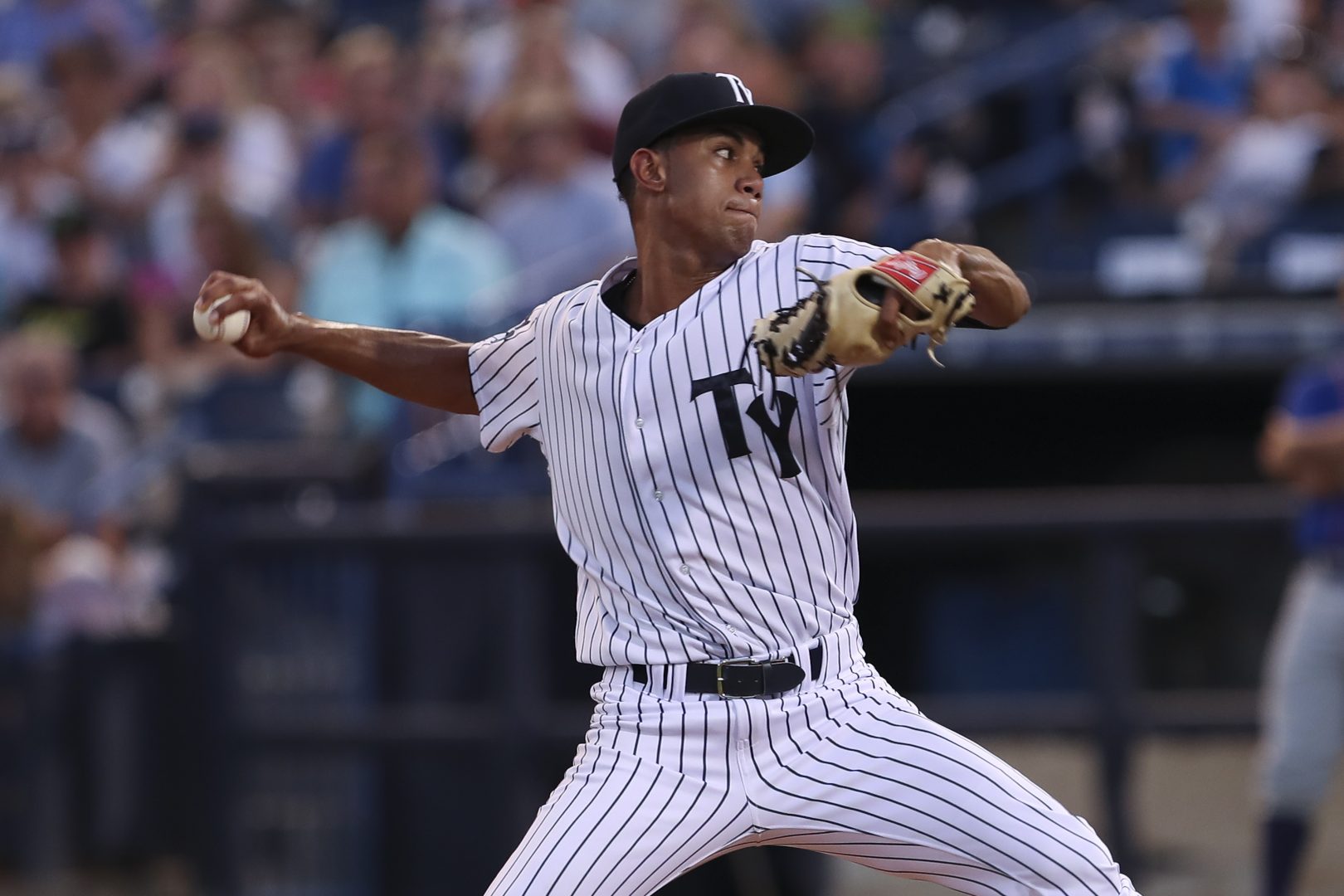 The Tampa Yankees took on the Dunedin Jays in Game One of the FSL Divisional Round Playoffs. The winner would be one game closer to being crowned ‘Co-Champion’ as Hurricane Irma closes in, causing the cancellation of the FSL Championship Series. Brian Keller got the start for Tampa, Josh Degraaf got the nod for the Dunedin Jays.

Unfortunately, Keller was not at his best tonight and nowhere near it, and it made the game seem over before it really started. Keller would give up two walks, two singles, a double, and a homer in the first inning, and the Jays would be up 5-0 after the first. Keller wouldn’t even be able to finish an inning as he had little control over anything he pitched, missing nearly every target given and missing up.

Adonis Rosa came in for Keller to get the last batter in the first inning and it would be his game from there on. Rosa pitched six innings for Tampa and despite being visibly tired his last two innings, gave the Yankees shut-out pitching for all six frames. He totaled seven strikeouts and give up just four hits. Rosa gave his best efforts when the team absolutely needed him most, aside from two outs it was mostly his start and it kept the Yankees’ hopes alive.

The Yankees offense had one hit in the first three innings, a single by Estevan Florial, but in the fourth their comeback would start. Gosuke Katoh hit a solo home-run to right field (his seventh with Tampa), drawing the Yankees within four runs. In the sixth inning, after Florial’s triple, a wild-pitch brought him in to make it a 5-2 game and in the seventh the power showcase would continue.

Dalton Blaser, who was making his High-A debut, hit another solo home-run to right field, as the Dunedin fans started getting more and more quiet. Blaser had only hit three home-runs with Low-A Charleston this season. Hoy Jun Park then delivered his own bomb that hit the roof of the Jays facility in right-field, bringing the Yankees within a run.

The Yankees’ due up in the ninth was Donny Sands, Blaser, and Alexander Palma. Sands got the ninth inning started with a liner to right field. Terrance Robertson came on as a pinch runner and was moved to second after Blaser’s sacrifice bunt. After Palma’s groundout, Park was up with two outs and his at-bat would cause some drama that luckily didn’t decide the outcome of the game. The Jays catcher clearly committed an interference, which muffed Park’s swing up noticeably, however, it was not called by the home-plate ump (despite the loud sound) and Katoh had to carry on with two strikes against him. Park though, a pesky out, battled his way to a walk and kept the game alive and Kyle Holder would have his try after. The comeback (to tie) would be completed by Holder as he hit a hard grounder past the diving Jays’ second-baseman.

In the tenth Estevan Florial would draw a walk and up came Tim Lynch, the most powerful hitter the Yankees had, and he would show that power with a huge tie-breaking home-run to right field, giving the Yankees a 7-5 lead. A couple singles later by Palma and Katoh would give the Yankees one more insurance run and it then led to their huge 8-5 win. Matt Frawley was awarded the win as he pitched the final two innings for the Yankees. Though he gave up a run, Frawley held on and secured a game-one win and put the Yankees one win away from being Co-Champions of the FSL.

Rosa’s efforts can’t go unnoticed despite not earning the technical win, the Yankees got more than what was needed from him. Trevor Lane also pitched 1 1/3 inning and recorded four strikeouts and gave up one hit in the process. Tomorrow the Yankees have Albert Abreu on the mound to try and finish their spectacular season and though it will be cut short, it is clear they dominated nearly everyone they went up against.