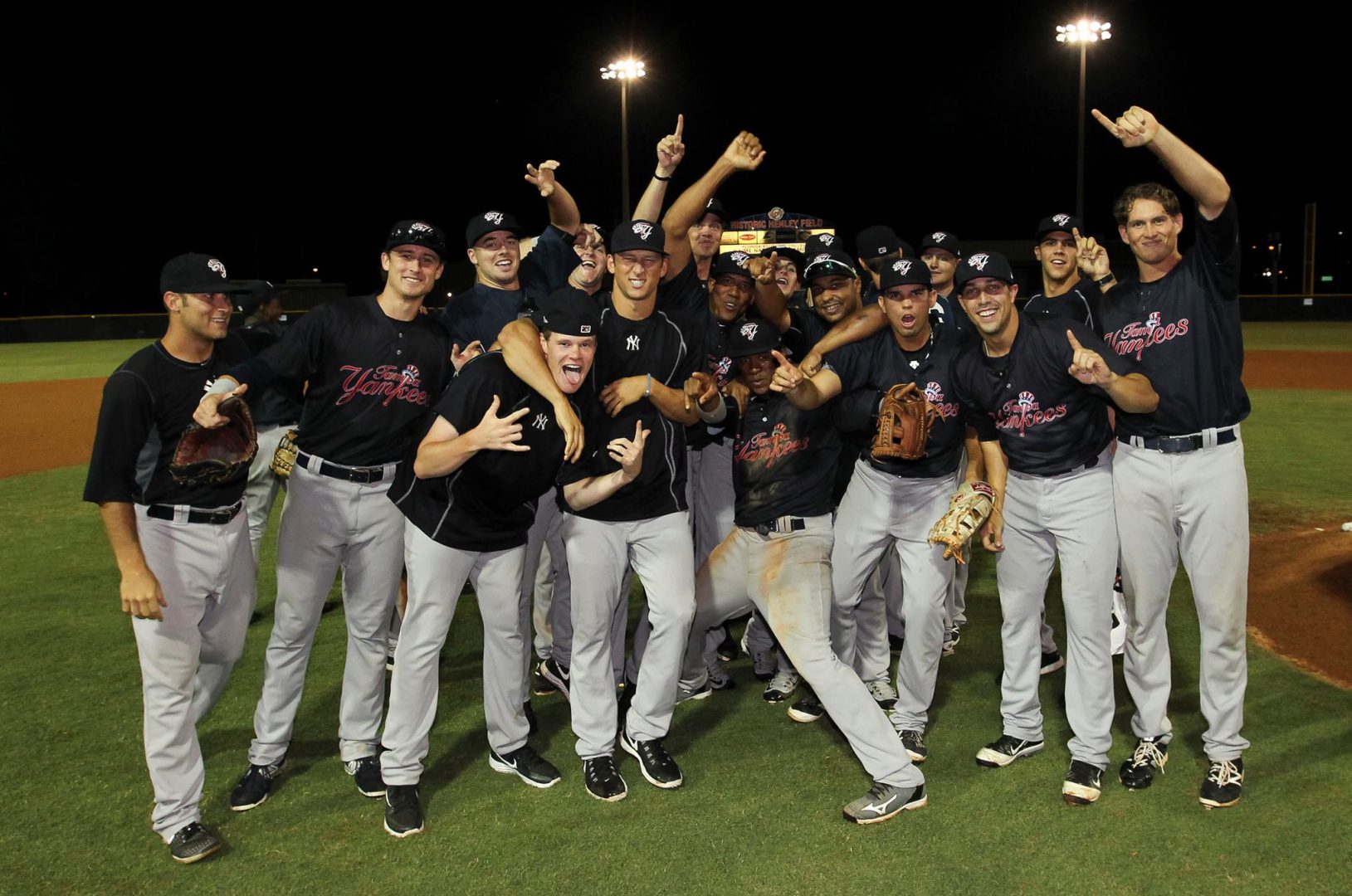 With a win last night following a Clearwater Threshers loss, the Tampa Yankees were crowned as Florida State League North Division 1st Half Champions. Their 41-25 record was far enough to claim the title, winning the FSL North by 3.5 games and having the best first-half record in the FSL overall. The Yankees had it all working throughout the first half, having no trouble scoring runs and eventually having dominant pitching to be the backbone in their road to victory. Leading the way for the Yankees was Pat Osborn who has now taken three different teams to the playoffs in three consecutive seasons. The title didn’t come with ease last night though. It took the Yankees 18 innings and eight different pitchers to seal the first-half title.

After dropping three of four in Tampa to the St. Lucie Mets, it’d prolong the process of the Yankees earning the title a bit. However, they’d get the job done as they went on the road to Lakeland Thursday night. James Reeves was making his third start of the season and he’d do his job to help the Yankees get the win should the bullpen hold on. Reeves pitched 5 1.3 innings giving up just one hit and striking out six batters. Reeves also went without walking any batters, something that he’s had trouble with at times this season. The Yankees’ lineup did their part as they put a run across in the fourth and fifth innings. Jordan Foley took over for the Yankees and pitched 1 2/3 innings of one hit ball. Following him would be Dillon McNamara to come out for a two-inning save. However, the Flying Tigers would tie the game up in the bottom of the ninth with two outs and from there the bullpens would battle it out for another nine inning frame.

Jonny Drozd pitched 2 1/3, giving up just one hit and striking out two, and Joey Maher followed with 1 1/3 of no-hit ball. Though it had the same outcome, the Flying Tigers were getting something even better from their bullpen-longevity. Each player who came out of Lakeland’s pen pitched no less than two full innings until the 18th. The Tigers went through six pitchers compared to the Yankees’ eight. After Drozd and Maher, Travis Hissong, Angel Rincon, and Gabriel Encinas would pitch the final 5 2/3 innings. Hissong only pitched 2/3 of an inning as he pitched 2 1/3 the night before in Tampa against the Mets. Rincon had perhaps the best showing from the Yankees’ pen as he went three full, striking out four and giving up just two hits. Gabe Encinas finished the night with two innings, a hit, three strikeouts, and three walks.

As the game hit the 18th inning, the due-up was Thairo Estrada, Austin Aune, and Abiatal Avelino. It’d take just those three to finally end the game. Thairo started the inning off with his third double since joining Tampa down the left-field line. Austin Aune advanced Thairo with a single, and Avelino would bring him home with another single to center giving the Yankees the 3-2 lead. The home-half of the inning would get somewhat hectic for Encinas as he had two men on base after a walk and single. He would stick in there to draw a pop-up, and strikeout Ismael Salgado for the last out of the 4 hour and 54 minute game.

Now that the Yankees have finally clinched their playoff spot with a first-half title, what made them so successful this half? Their infield was projected to be one of the best before the season even started. Aside from top-prospect Jorge Mateo, top third base prospect Miguel Andujar was set to have another successful year. To the right side there was Abiatal Avelino at second, and a mixture of Mike Ford and Billy Fleming at first. Mike Ford was the hottest hitter in the Florida State League (and arguably the MiLB) before his injury which put him out indefinitely, and that opened a spot for Fleming to take over for consistent play at first. Fleming’s 13 doubles still technically lead the Yankees, and his 27 RBIs was second best on the Yankees before he was promoted to Double-A Trenton. Avelino has had a mixed 2016 campaign, but he is still second on the team in the total bases category with 84. Abby also is second in stolen bases to Jorge Mateo as he and Mateo were the main source of speed for the whole first half. Billy Fleming and Miguel Andujar are now in Trenton, Mateo is more than likely to join them in the next couple of weeks as he was project to be promoted before this season around the all-star break.

The T-Yanks’ infield was not the only source of offense though as the outfield has also been on fire for Tampa this season. Mark Payton and Michael O’Neill are two other players who have been promoted to Trenton in the first half. Payton left with a .303 batting average and 15 RBIs, O’Neill with a .276 BA, 10 RBIs, and 50 total bases. With them in Tampa was Zack Zehner who leads the team with an OBP of .376, Austin Aune who is second on the team in RBIs with 28, and Jake Skole who has five home runs and enhanced his offense significantly in May. Devyn Bolasky has now become an every day player for the Yankees and is sporting a .321 batting average. The Yankees’ lineup all around was a hurdle for pitchers and more often than not they were able to give their own pitchers comfortable leads, which would eventually bring 41 wins to Tampa.

One of the main issues for the Yankees to start the season was pitching. Had the lineup not been able to put up the kind of numbers they did, it could’ve resulted in a significant amount of losses through April and May. It still did cost them a good amount of games as the Clearwater Threshers were leading the FSL North on and off through that amount of time. Once the pitching locked in, it was all Tampa the rest of the way though. Two of the top three starters for Tampa are now in Trenton with well deserved promotions. Vicente Campos and Chance Adams were extremely strong for the Yankees in the first half. The two combined for a 9-2 record, 117 innings, and 129 strikeouts. Chance Adams who was just converted to a starter this season was arguably the best pitcher for Tampa posting a .97 WHIP in his 57.2 IP.

After Campos and Adams was Ian Clarkin, the 2013 first rounder. Clarkin has had a strong first half as well despite his 4-5 record. In his 73 2/3 innings he holds a 1.33 WHIP and 3.30 ERA. He continues to stay consistent as he hasn’t allowed more than two earned runs in his last four starts. What Clarkin has done better than Campos and Adams is pitch much further into games. Clarkin has pitched at least seven innings or more in five appearances so far and has done so in his last two consecutive starts. James Kaprielian made three starts in the first half giving up just three runs in 18 innings. Kaprielian was shut down due to elbow inflammation, however, he has started to throw again and should return at some point later this season. Look for James Reeves to be a part of the rotation as well as he’s made two consecutive starts with major improvements from his previous outing to last night’s. Reeves has pitched 32 innings and has a 1.13 ERA to show for it.

The two-way success was a struggle for any team going against Tampa in the first half. The Yankees lost a total of five series in the first half and had a total of three sweeps. They lead the FSL in runs (303) and hits (572). As for pitching they were fifth lowest in earned runs, first in strikeouts, and second best in WHIP (1.22). The T-Yanks will certainly have a different look heading into the second half, but the possibility for the same success will definitely still be there. Two ‘newer’ Tampa Yankees who will have a huge impact on their success in the second half are Thairo Estrada and Domingo Acevedo. Acevedo looked brilliant in his Tampa Yankees debut on Wednesday and Estrada has been hot for the Yankees since his promotion as well.